If It's Monday It Must Be Saturday

If It's Monday It Must Be Saturday 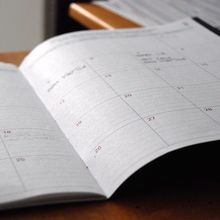 We are living on a plateau. A new plateau and a new normal and we are grateful for the plateau. Robert's decline took awhile and did change part of our normal way of life which began at the end of the last decline.

What changed? Robert is less able to follow a process in sequence. The t.v. remote and the Roku remote challenge him most of the time now. When I hear, "Oh no!" I begin making my way closer to him. He is gong to need help getting his show back or selecting the right episode or he is now in Settings and puzzled. He is as lost as if he just walked into a dark and mysterious forest. Before the decline this would happen once in awhile and now it happens daily.

Robert's gait instability has become more prevalent. He can only walk short distances in the house and I have asked him to stay out of the kitchen because he is at a high risk to fall. Now his walking in less stable and it appears it is going to stay at the current level until the next decline.

I am home more and more because of the changes in Robert. He doesn't need me to be home all the time except when he does need me. I know that is not worded well but it is how things are today. I am home more and my awareness is sharper and my personal freedom is less.

We live in a mobile home. At times Robert will tell me he will be downstairs in just a minute. He will call me mom or his first wife's name. Days and nights come and go with one day looking the same as the other. It is Monday. He thought it was Saturday. He forgot his chair was a lift chair and was trying to sit down in it and sit back on his own. Finally he remembered and pushed the brightly lit yellow button on the remote. Voila! The chair came to life and all was well.

Robert is not alone in the distortion of time. I often forget the day of the week and, recently, in Wal-Mart, saw the Halloween candy and thought they were selling the left-over candy from last year's Halloween. It did not occur to me that Halloween is around the corner.

I think it is the same for most of us who caregive. I think Monday and Saturday get exchanged without much effort and the lifestyle we had before the FTD fades into the past without us noticing for many months. Robert and I live in a life that is challenging, uncharted territory, confusing, goofy, sad, and often, on his part, no reaction at all. That attribute is difficult to accept. Here but not here and here for awhile and then apathy shows up and I am one hand clapping. I wonder if he is battling inside himself. If he is he cannot verbalize it.  Any attempt to draw him out becomes an effort in futility. He cannot describe specific symptoms, pains, moods. etc. If I ask often enough he will respond with anger and ask me to stop. I do.

Monday is Saturday and there is no explaining it. FTD is a chameleon of a disease. We are enjoying the plateau. O.K., I am enjoying it. I have no idea how he feels about it or if he knows there has been an "it". He wants to watch t.v., eat, sleep and let time take time. I am like a B.B. shot into a barrel. Can you imagine?

Lark, you could have been talking about me and my husband. My husband has stroke induced vascular dementia with FTD overlay . I Do so understand .

Lark, I completely understand the time lapse/mix-up thingy. When my husband died in 1995 (and I had to pause before typing that to get the year right) it messed up time completely. I lost an entire year. To this day I get the years mixed up of what happened when. Now with Mom - who can't figure out what day it is 90% of the time even with a dementia clock - it's worse. PLUS when you work full time and are a caregiver there truly is not weekend break - there's no break period. Doesn't mean we're loopy, or descending into dementia ourselves just that we're stressed, burning or burnt out and totally exhausted. Or so I keep telling myself

Thank you for sharing Lark. I am glad there is a leveling of sorts for now...about the confusion of days, it even happens to those of us who are not caregiving anymore and it worries me sometimes...you are so strong!

Becca, the time thing is very disorienting for me. Traumatic years do leave an indelible mark. I am told by many people that I should write a book. I might just do that one of these days. Thank you for our comments_mysql.

Lark, your statement, \"I am one hand clapping\" is brilliant. Thank you for your incredible insights and being able to express them so well.