I'm New to This

I'm New to This

JoAnn
(Editor's Note: We welcome JoAnn to our blogging team. You can connect with JoAnn on her profile page: @teresajo07.) 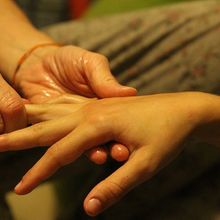 y name is JoAnn and I am pretty new to caregiving.

I had to do caregiving since May of 2014 since we found out why my mother-in-law (my husband's step-mom) has been so sick. She had been sick for some time before May of 2014, but the doctors were scratching their heads not knowing what to do. Finally when she lost control of not being able to make it to the bathroom, we had to call 911 and she was taken to the local emergency room of our local hospital. They started doing all kinds of tests and found out she had a growth on her right side of her lung and believed it to be lung cancer. To be sure they had to transfer her to a hospital an hour away because they specialize in doing those sort of tests to be sure if it is lung cancer.

First they thought it was TB which set off alarms all around us as a family. Everyone wore masks into the room until they were sure it was not TB and the tests did come back negative. So it is lung cancer.

I want to back up a bit to tell you how we got where we are. Back in February of 2011, my husband got laid off from his job in Ohio, so we were losing everything. My father-in-law offered us a place to live, so we moved to Tennessee. I worked on continuing to get my GED until I passed it in June 2012. Then when I could not get a job, I had decided to try to go to college online to get into a career. I started taking classes to be a preschool teacher in April of 2013.

My husband was having all sorts of pain, he tried to work, but he could hardly do anything, so he filed for disability which he was denied. Then my mother-in-law started getting sick late in 2013. After her diagnosis of lung cancer, she received radiation treatments for about five weeks. She was able to walk a little with a walker and assistance. We also got her a wheelchair. She was doing well, so we thought, but we were wrong.

One morning she tried to go to the bathroom on her own, and she couldn't make it again. We had to go to the hospital once again and found out things were getting worse. They had to order her a hospital bed to put in the living room. We had a commode put beside her bed as well. That only lasted about a week; we were getting her up off the potty while the nurse was here visiting and her legs gave out under her. We kept telling everyone her legs were not useful any more; no one listened until her legs gave out in front of the nurse.

So she is bedridden and hospice nurses and nurse's aides come in three times a week to see her and bathe her. My husband and I take care of her in between. I am in charge of giving her the medicines she takes in the mornings and in the evenings, and my husband helps with pain meds. He can pretty much tell when she is in pain because she won't tell us. We change her twice a day, sometimes three times a day.

She had an appetite along with the help of this cream milk like medicine she was taking but this in-home doctor with hospice says not to give it to her because it causes blood clots. So we stopped it. Now he gave her a pill that is supposed to bring her appetite on but it gives her diarrhea and makes her sick to her stomach. So now her appetite is decreased once again.

She gets agitated and she is now thinking someone is poisoning her. We told her we love her, we would never do that to her. We are taking care of her. We know she has had dementia for some time even though the doctors never told us she did. Now we believe she has Alzheimer's, the first stage of it because all the things she does and says. The doctor will visit soon, but not soon enough.

So I have had a church get a hold of me several times trying to set up visits for me to talk with them for my well being. It's a Christian service for caregivers. Everyone has been sick and hasn't been able to make it to see me. Now the weather is a big problem. So I'm seeking support from a group for my well being. I only hope it helps.

Who sees this? I do not want certain members of her family seeing this because they cause problems with our family.  I am overwhelmed by all this. I used to be a nurse's aide years ago when my kids were little.

Now, I'm 61 years young. This is my story. I hope there is some feedback on this. Thank you.

Yes! Keep blogging and try to make the online chat! It helps. Probably nobody will see this, I use my online persona mostly for my sister in laws privacy, not mine...lol I don't care who sees :) the support I get here has helped so much for my mental well being! I, like you, provide total care for someone I'm not blood related to. My SIL goes between totally bedridden to some walking, her family is pretty worthless aside from her brother (my husband) so I know exactly!

Hi JoAnn--I'm so glad you've started blogging!\r\n\r\nI can only imagine how stressed you must feel--it's a lot of pressure to care for a family member who requires total care. And, you're right--we're not young any more!\r\n\r\nI hope writing out your story helped. Please feel free to write as often as it helps you. While your post is public, it would be very difficult for your family members to see it (and know it's you) unless you provided a link to this article. So, you are safe. :) Many of our members like to write freely so don't share their posts with other family members. \r\n\r\nThe support from your church sounds wonderful if they could get to see you. :) You'll have to let us know how you like the church program once you get some visitors. \r\n\r\nI'm wishing you and your husband and your mother-in-law a peaceful night tonight.\r\n\r\nI'm glad you're here with us.