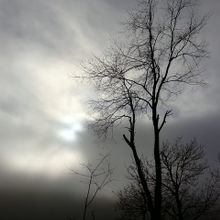 My mother was born on her aunt's birthday. Her name is the reverse of her aunt's -- Agnes Eva for Eva Agnes. Great Aunt Eva had some unknown form of dementia that took her in her early fifties. The end was quite simply that she quit eating because she thought she was being poisoned and would only allow my mother to feed her. My mother was maybe 12 so of course she wasn't with Aunt Eva every day, all day. She was a child and she had school.

When Mom turned the age that Aunt Eva died she was convinced that she was going to die as well. She wasn't sick, she had no reason to think this way -- she just did. By the next birthday she was pretty much over it, or so it seemed.

It's now 20+ years later and Mom really isn't eating. Not for me, not for anyone.

Some of it is probably the sweets craving that comes with this disease. Some of it may be the loss of her lower dentures - that she won't let me have replaced - making it hard to chew things. But that's why we do softer foods and cut things into small bites. Some of it could be that she's feeling depressed over her situation - and really, who wouldn't? And it could all of the above. But she can't talk, so she can't tell me.

Both of her aunts had a form of dementia. Aunt Eva's was undiagnosed and we'll never know what it was. Aunt Laura's was vascular -- formerly known as hardening of the arteries. Mom's oldest sister Theresa has Alzheimer's and is in the later stages. Her other sister is 80-something and fine. My grandmother was fine mentally even though both of her sisters weren't, she passed from physical problems with her digestive system. Two out three women in each generation end up with a dementia of one type or another. There are seven of us female cousins in my generation. But only one set of three sisters. And those sisters are my mother's brother's daughters so they might be safe. Regardless, no one has had what Mom has, which is considered rare and since not as much research money goes to FTD and PPA we're really playing in the dark here. The things that apply to Alzheimer's, Parkinson's and stroke-induced aphasia don't apply to Mom even though she has somewhat similar symptoms to those.

I read in the online groups how loved ones say this or that -- some mean and hurtful, some silly or confused -- but mine can't talk at all. You end up asking yes/no questions where the first answer is always "no" so you have to keep at it. And the loss of language means that gradually she's not understanding what you're asking. This scares me when considering placement somewhere. Are busy staff members going to take the 15-20 minutes it can often take to figure out what she's trying to say, what she needs? She won't tell you if she needs to use the bathroom, you have to ask and try to follow the schedule but if  you ask the answer will be "no" so you have to be matter-of-fact and just get her there when up. She can't get up very well on her own (yet amazingly can get out of bed in the middle of the night!) so she needs help to get out of her chair.

I have to wonder if Mom is thinking of Aunt Eva and because of their closeness, shared birthday and somewhat shared conditions, Mom is retreating of her own accord. And that scares me.

I can so relate---with your mother not able to get up well on her own---and amazingly getting up in the middle of the night. My mother did that. No one would believe me. I was the only one to see it. I know how frustrating it all is. The \"matter-of-fact\" stuff puts you both in a very unsettling place. Hang in there. You are doing a good job.