It's Been A Week

It's Been A Week 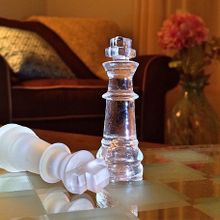 It's been a week. Every day after work, she wouldn't leave me alone for a minute. Won't leave the cats alone. Every minute I am home the knots in my shoulders get worse. Today she's in her room. Had the door open for a while this morning for supervised kitty integration. There was a spat around noon resulting in needing to wash the bed linens (someone got the piss scared out of them literally), so closed the door and she's been in there ever since with Callie Kitty. She tried to touch and cuddle Callie after the spat while the poor kitty was snarling and growling could not get it through her head  that Callie was upset and would bite her. This is after she once again thought church was at 9:00 a.m. and not 5:00 p.m.

Tried to hook up the cameras today, won't connect to my wifi network and tech support is closed today. Open tomorrow but closed today.

Tried to hang shelves to display the family tea cups (great aunts, great grandmother, etc) that she had at the condo. Put hole in wall 'cuz the "stud finder" I have -- which couldn't find its butt with both hands if it was human -- told me there was a stud there nope nothing actually nothing, totally hollow - heard the plastic screw seat hit the ductwork below. Had to go get wall patch fabric.

Still battling the hygiene issue. Have had the bedroom door slammed in my face when I mention it. Managed to wash her face twice - once after she threw up her food (can't have pork chops any more too dense to chew apparently) and today because she had her lipstick way out of the lines and then smeared it with her hand. But that's about it. After the throw up incident she pulled her bottom teeth out and I tried to clean them. They were awful. So next day I got a new cup and some Polident but she refuses to use it.

Another $8 that I couldn't afford to spend out the window. Picked up her prescription for Aricept yesterday, won't pay me for it, another $9 gone. She's supposed to be paying "rent" to help with the bills and mortgage and protect her income stream (according to social worker this was a good thing to do) but her checkbook is in her purse in her room and I can't get at it. The amount of money I have spent on getting this place set up is mind-boggling when you consider up to three weeks ago I was trying not to lose my house on $15 an hour. I did get a better job and am making more now but it's only a fraction of what I was making in January 2016 when I lost that job. About at the point where I want to say, okay fine won't clean up for me or let me help you clean up fine, I'll get a home health aide in here and have them bathe you. Her room already stinks to high heaven. In just a week!

Everything is a battle. Every-single-thing.

I understand this move is hard, I get it. I do. It's horribly hard on me too. There are key things of my life that are now over, so yeah there's some resentment and anger. I'm told that this normal. But I don't like feeling on the verge of tears all the time.

I talked to the social worker from OSU (where the neurologist is) this week. Somewhat helpful, is sending me info by mail. Still have to try to get an appointment at the agency on aging but from what I hear the local office expects you to know going in what you qualify for and what you need. Really? Isn't most of that THEIR job?

Writing helps, when she's leave me alone to do it.

I know how much effort this takes in the living of it, the mental slogging of it, and the documenting of it. You are doing an amazing job at all of it.

Please keep writing! \r\n\r\nSo much tumult and loss and stress and unknown and frustrating battles will definitely bring on the tears. There's just so much to cry about! \r\n\r\nKnow we pass a virtual box of tissues as often and as much as you need.

we went through this kind of behavior with my mom for about a year when they were living at home. I moved in with them for awhile. It's hard - harder than hard. Mom finally went in to the ER when she paranoid. We were still brushed off a lot because her behavior in the hospital was different than at home. I finally wrote up a list of all we were experiencing with her at home and ended it by saying I NEED HELP! \r\nSee if you can get a social worker to come out to the house and evaluate the situation.