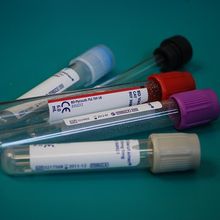 I was a self-directed child. I did my homework without reminders or cajoling, set my own bedtime. Without thought, I initiated affection with my parents, making sure I gave each a good night kiss before heading to bed. As an adult, I struggled with hugging and kissing my parents--I seemed to have left that natural tendency to be demonstrative in my childhood.

A few years ago, I decided to make a concerted effort to be more affectionate with my parents, especially my dad. After he put in the air conditioner in my bedroom last summer, I gave him a hug, which thrilled him no end and which he delighted in telling my mom about. When a bum door knob kept me captive in my bedroom for a few hours and my dad finally sprang me lose, I gave him another big hug. When he received difficult news about his bladder cancer, diagnosed in 2004, I gave him a hug. Sounds so odd to work at being affectionate. But I do.

Earlier in November, my dad had his six-month cystoscopy to check if his bladder cancer has returned. The doctor would prefer my dad have the cystoscopy every three months but last year my dad grew tired of the procedure and the aftermath, the catheter he needs for about five days after the procedure.

During an appointment last year, my dad negotiated with the doctor about how often he would have the cystoscopy. The doctor explained the risk in delaying the procedure by three months -- the cancer, which can be aggressive, is best caught early. If it returns and remains undetected, it may spread before they catch it during the cystoscopy.

My parents headed out early the morning of November 10 for his cystoscopy, returning home later that morning. They both told me that the doctor had found something outside the bladder and that my dad had an appointment on November 12 to discuss the biopsy results. It could be a kidney stone, it could be something else.

My parents and I arrived early to his appointment on the 12th, taking our seats in the waiting room. The nurse called my dad, who motioned for my mom and I to join him. “We'll come in after you have the catheter out,” my mom said.

About 10 minutes later, my dad came out and told us, “He doesn't have any results for us. We have to come back in a week.”

So, we resigned to wait, with my dad making an appointment for the following Wednesday, November 19, to learn the results of the biopsy.

The night before his appointment, I was in the kitchen when my dad bellowed for me. I joined my parents in the family room, taking a seat on the couch opposite them, each settled in their own recliners. “It's a tumor,” my dad said.

Apparently, as my mom updated one of my brothers about my dad's appointments on the phone, my dad interrupted her conversation to say, “Oh, he told me it's a tumor.”

I guess my dad was irritated with my mom and I the previous week when we wanted to wait in the waiting room and decided to keep that detail from us. Okay.

My mom and I huddle later that evening, muttering about the secret my dad decided to keep. “Well, we don't know if it will be cancerous,” my mom said.

I don't believe in spreading false hope so said, “It will be cancer.”

Unfortunately, I had a work commitment and couldn't make the next day's appointment. The next evening, I arrived home to my parents at the kitchen table, my mom on the phone with my sister. “It's cancer,” my dad mouthed to me. The cancer is now in one of the ureters. We don't know yet if the cancer has spread anywhere else and we don't know the size of the tumor.

After my mom finished the phone call with my sister, my parents and I stood in the kitchen discussing the diagnosis and my dad's perspective. My dad indicated that he wants to wait until January for any treatment. We have to meet with an oncologist (a urologist treats his bladder cancer), who can share options and treatment.

As we stood, I kept prodding and prompting myself to hug my dad. It's such an odd experience — I wish the hugs were a natural inclination. I finally walked over, gave him a hug and shared that I was sorry to hear the news.

Later, I asked my mom how she was feeling. “You told me it would be cancer,” she said, “so I was prepared.”

My dad seemed to get old this summer. He sleeps more, taking a 90-minute nap yesterday afternoon he told me. I wonder if that's the cancer.

Thanks so much to all of you! I sooo appreciate all your thoughtful words. And, yes, my dad wants to wait until the holidays are over to start any kind of treatment. I will definitely keep you posted.

Thank you for sharing your story. you are such a source of strengths for us. I hope we can also be there for you as well.

Denise, I hope that you will continue to share your story here, and let us give you as much support as we can. It is a small thing compared to what you do every day to help us cope with our situations. Please keep us updated. Writing about it will help.

Denise, I'm so sorry your family received this bad news. Please keep us posted as you can on your father's treatment. Does he want to wait until January because of the holidays? You and your family are in my thoughts.

Wow, Denise. No one thinks you have to go thru this stuff, too! Wouldn't it only seem fair you would have immunity, like in a reality tv show? I'm so sorry for your family and your dad. Thank you for sharing your own journey with us here.