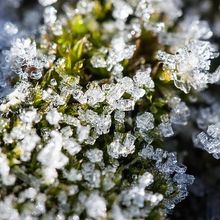 It's officially 2014 and it doesn't feel like much to me. Holidays, birthdays, and all other special occasions have pretty much been lost on me for a few years now. I celebrate them for the sake of others but inside, I'm always wondering, "Who really cares?"

Yes, it is a very cynical way to be, I suppose. Or you can call it an extreme realist view. However you want to see it, all I know is I am trying to keep myself afloat, mentally, emotionally and physically everyday. A new year means nothing to me because I can't see in terms of an entire year, I can only view life day-by-day right now. One too many close calls, I suppose.

Anyway, maybe I am missing out on something taking this approach but maybe not so much. Everyone I know focuses on the "big picture" year and their hopes for change makes them anxious and stressed and they miss out on the everyday fun that can be had. I am already anxious and stressed every day, why add on to it.

It was a tough lesson because I used to do the same. Counting my eggs before they hatched, if you will. I would have elaborate plans for months in advance, tickets for trips and concerts, and ideas of fabulously thrown parties for different occasions just to be let down when the time came and I lost out hundreds of dollars because I was holed up in somebody's hospital room praying for my husband's life to be spared.

Now, I wake up and assess our situation. How does he say he feel? Then based on how he says he feels, I determine how he really feels because he lies. Not necessarily on purpose but he's used to not communicating or sharing his feelings. But I know that dark circles around his eyes means he's in the throes of a migraine and the darker they are the more possibility we have that a seizure will occur. I know that when he's not talking non-stop then he's feeling tired even though getting him to take a nap is an ordeal because he feels he's going to miss out on something.

Then I assess myself. How do I feel? Then once I tell myself how I feel, I ask myself how I really feel because I lie to myself, as well. I want to believe that I have super powers and I can run the show one-handed. And while I run the show one-handed most days, not because I truly possess these powers but because I have no other choice and no one else to count on besides myself, I've had to get real with myself. Do I think that I can do anything beyond the basics needed for Marc's care? Is standing up for hours making a three-course meal really necessary or am I even capable of doing it without causing myself to pass out from sheer exhaustion?

I bring this up because I've been asked numerous times what my plans are for 2014. I can't make plans for more than a few hours at a time, making plans for a year just seems impossible.

I know what my hopes are. I am hoping that Marc's recovery comes quickly and that this is a long-term fix and I didn't just subject him to the most grueling of surgeries and pain for us to have the same struggles over the upcoming year.

I am hoping that while the doctors say his seizures may be permanent because of the scarring on his brain from the surgery that might develop that it isn't permanent. I want for him to be able to go swimming, hiking... hell, even grocery shopping, alone, like he used to and not feel he needs a constant babysitter to do so.

I am hoping that I can go back to work. Giving up my job for this long has not only been hard on us financially but hard on me psychologically. It's caused me to question if I am even capable of going back and functioning like normal because I'd be too worried about Marc and whether he's okay.

I am hoping that all of this struggle, grief and pain we've endured presents itself as an opportunity for something greater in our lives than just suffering. I don't know what that may be and I have no ideas to what I would want that opportunity to be, I just hope I recognize it if it does show up.

So, what's to come? I have no idea. Plans for the new year? I think I'll stick to plans for today. Doesn't mean I am not grateful for the lives we have, the kindnesses we've received, the prayers we've been given, and the time we have left together. It just means, I'd rather focus on the here and now than the maybe later. Right now, I can only focus on what I can do today because thinking about tomorrow is too heartbreaking if it doesn't work out the way I'd want it to.

Still, I am wishing everyone of you a Happy New Year. I hope that your dreams, goals and desires for 2014 all come true.

Casandra, I don't see your view as cynical at all. Every good day is a holiday IMHO, and every meal is a feast. Just because our lives are constricted doesn't mean we can't live them to the fullest, including naps. :-)\r\n\r\nPlans for 2014? Keep on keepin' on. I treasure your hoping and love that you make assessments -- how Marc feels, how you feel. It's another way of taking vitals.\r\n\r\nBlessings to you both for 2014. (((Hugs)))

Gail my prayers are with you. Holidays have been a hard time for my mom and myself but not anything likes you