My journal-writing goes back decades: 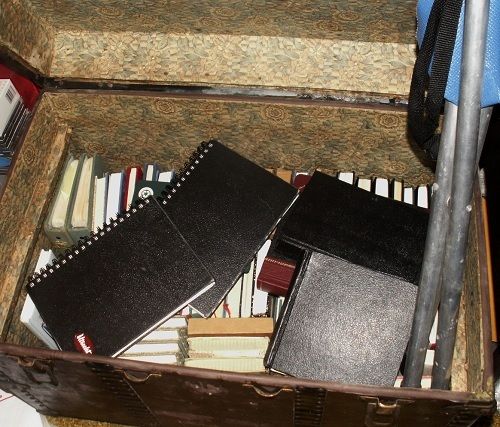 (Above: A sampling of my journal notebooks)

Every few years I key in my handwritten notebooks. It makes the entries easier to search. That's come in handy when my partner asks me to go to "the wayback machine" when she tries to recall when an event happened or its details. But I've been typing my journal up since long before she and I had met.

The key-in is a review of sorts -- of how much things have changed and how much they've remained the same. Of what tomorrow had looked like to me, many yesterdays ago. I have letters I've written to my future self. Sometimes, when I've reached that future, I've written back.

What remains the same the most is my sense of identity. Circumstances have changed, to be sure. My roles have changed, and thus many behaviors associated with them. I like to think I've learned a lot. But through all that, the same core identity comes through -- which is good, because that identity has held me together through everything.

Years ago I dreamt that I was looking at a photograph of myself, one that I liked. The photo dates from about two decades ago. In it I sat on a hiking trail in Alaska's Tongass National Forest, looking serene.

I didn't recognize myself. "I don't know who she is," I said in the dream, I don't know to whom, "but she looks like a nice person."

I've had other dreams in which I've looked in the mirror and seen a reflection that wasn't the way I actually look, but that I knew was still my reflection. Each time it happened I felt mild surprise and general acceptance: Oh! How odd, but ... okay.

Perhaps twice in my life, I've experienced a brief flash of disorientation while awake, in which everything I was -- my identity, my sense of self -- vanished. Nothing came in to take its place; my very existence seemed an illusion. It felt immensely freeing, like the lifting of a veil. I can't point to anything that might have precipitated those episodes, which lasted just a few seconds.

Those experiences are very valuable to me. They remind me that just because I get stuck in a certain mindset or a way of being, even down to my core identity, that's not all there is.

I've begun typing from my notebooks again. I'm about five years behind.

The experience is a bit surreal. I was still a caregiver then, still noticing what was "off" with my partner and supporting her fulltime, but she wouldn't receive a definitive diagnosis for almost another four years. At the time of the entries I am now keying in, she had denied she needed any help at all, except for the allergy shots I gave her.

My energy was bound up in activities on which I had just gone full-throttle, and which would vanish entirely by 2012. Sitting here today, I wonder whether those activities have gone on their last run.

But from today's vantage point, I'm not all that invested in the question. To maintain those activities would require an energy that I simply do not have right now. The energy that I do have is meant for other things.

The journal key-in becomes a different kind of exploration. It is valuable to me by simply being what it is.