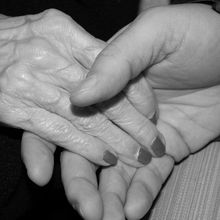 There was an article in my local newspaper about a woman named Rosemarie who had lost her mother. She shared a photo that was close to her heart with  the reporter of the Post Tribune in Valparaiso Indiana. The photo showed her hand clutching the hand of her mother who had passed on March 7, 2018 at 84 years old. Rosemarie said that was her last moment with her. She passed away as she held her hand. Rosemarie was asked by the reporter why show him the photo and she said,  "just because".

*Just because her mother was her hero, her rock, her inspiration.

*Just because her mother was her guiding light after her fathers death in 2009.

*Just because her parents were her cheerleaders, always nurturing her to find herself and find her way.

Now both of Rosemarie's  parents are gone. She wrote an essay about her parents and sent it to the reporter. It is a love letter to her parents and to all of those people whose mother or father or both of them are gone.

Death is the ultimate common denominator in our lives, despite our beliefs, politics or faith.


It binds us more than any other subject at times.

Rosemarie did have one last loving moment with her mother. Her mother got very sick two years ago and was never able to live independently again. Her mother had pneumonia five times and during her last year of life was put into the hospital with pneumonia again after having been in the hospital just days  before. That very night, her mother was rushed to ICU  because she could no longer breathe. Rosemarie rushed to the hospital but her mother was already intubated by the  time she got there and never regained consciousness nor the ability to breathe. Rosemarie sat at her mother's bedside for 9 days praying for a miracle or for merely a slightly better health outcome. Neither one came.

Rosemarie had to make the same decision that she made for her father 8 years before -- to remove all life support and wait for her mother to be called home to Jesus.

Rosemarie's  father grew up in a low-income, tough Irish neighborhood and at the age of 3 lost his father in an accident. His mother was left to raise him and his two other siblings alone. His mother became an alcoholic after his father's passing; he and his siblings basically raised themselves in his mother's drunken absence. He became an educator who encouraged Rosemarie to look for answers in books such as encyclopedias, dictionary, the Bible.

Rosemarie would ask her father how to spell a word and he would tell her to look it up in the dictionary. She wondered how to look up a word in the dictionary, when she did not know how to spell it. Her father told her to figure it out, as she would have to figure a lot of things out in life.  Rosemarie's mother smoothed things over with love,patience and kindness while Rosemarie's father loved her too but in his own way.

Rosemarie's parents met at a dance. Her mother was different than the usual girls in the neighborhood. She did not have red hair and freckles, like the other Irish women. She was fair skinned, dark brown hair and her brown eyes pierced her fathers soul and intrigued him to no end. Her father was smitten with her mother. The hot headed Irishman and fiery Sicilian continued for 50 years. They called each other "The Duke" and "The Duchess," raising Rosemarie and her 2 siblings. Her mother stayed strong when her father was weak.

Rosemarie's father died of lung cancer during her parents 50th year of marriage. Her mother traveled for a year and grieved, came back home and packed her husbands things alone to give away to others. Rosemarie's mother would begin her new normal.

During this time, Rosemarie's mother became her best friend, her confidant and deepest inspiration for strength and now her mother was gone.

On the day of her mother's death, Rosemarie held her hand tightly as her mother took her last breath. Rosemarie has had to begin her own new normal without her mother.

When the reporter asked why for a beautiful, intimate story, Rosemarie said: "Just because, there is a message here for someone."