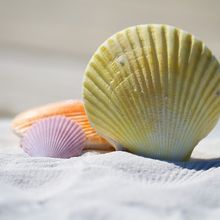 I love the beach. It is the place in the world where I feel the calmest; the lap of the waves, the call of the seagulls, the scent of the salt water all bring me back to happy childhoods romping in the surf at Rehoboth, not a care in the world. Even in those years when trips to the beach meant dragging baby equipment, sand toys, and a cooler full of juice boxes, the peace to be found at the ocean’s edge was worth the price.

Yesterday, I wasn’t so sure.

Bethany Beach is different than Rehoboth and has a parking system best described as odd. First you need to find a “Park-o-matic” machine, plug in your credit card, and receive your time-stamped ticket. THEN you wander around, looking for a place to put your vehicle. At Rehoboth, it was not unusual to dump kids and spouse at the boardwalk with accouterments, then drive to the third block back before finding a suitable spot. I assumed–erroneously, it turned out–that the situation at Bethany would be the same.

First of all, unloading a disabled spouse with a walker is not the same as unloading active toddlers with strollers and diaper bags. It’s harder. You can pick up a toddler and tuck him under an arm; you cannot in any way hurry along a disabled spouse. Just getting Ron’s Rollator out of the trunk of the car requires more arm muscle than God intended women to have. Once that was out and Ron was settled on the seat, I lugged out the beach umbrella, chair, towels, and cooler. Then, with a jaunty wave, I was off to find a parking spot.

This is not a quest for the faint-hearted. Only the first block of Bethany, as I soon discovered, is for the sun-seekers. The other blocks are given over to residents and businesses. By 11:45, most spots were already taken. (I blame this squarely on Ron, who is not a morning person. I, as the world knows, am. I could have been on the beach at 6AM.) After 20 minutes of our allotted two hours, I found a spot about four blocks from where I had left my husband. Then I walked back and began the fun part of the day: getting Ron and his walker to the sand.

I scooped up all the equipment and dumped it in a spot as close to the ocean as I could get, burning my feet along the way and leaving Ron perched on the Rollator at the end of the wooden path. Then I went back to help Ron, valiantly trying to push the darn walker through the sand. Not to be. Finally, I folded the walker up and carried it on one arm while Ron leaned on the other. Okay, now you have the image. Me, with my 350 pound husband on one arm and his 30 pound walker on the other. We finally made it to where I had dumped our stuff and when I began to struggle to put up the umbrella, a tanned and blonde young fellow came to help. Blessings on you, young sir. Someday, you, too, will be old.

I settled Ron into his seat with a sandwich and a coke, and sat in my own beach chair with an iced tea for a few moments of quiet. Ahhh. There is, as my mother often pointed out to me, no such thing as rest for a woman, so as soon as Ron had wolfed down his sandwich, he wanted to go sit by the water’s edge. Now the beach at Bethany has what is best described as a cliff that drops off to the water’s edge. I was contemplating how to manage this feat of strength when Ron called on a young fellow sitting near us for help. Vacationers are generally nice people, so while the young fellow carried the Rollator to the surf, his girlfriend and I help to steady Ron down the cliff.

Ron was settled and said he would be okay for a while, so I climbed back up the cliff to the umbrella and my novel. I gave the nice young folks a brief explanation: “He was in a car accident 14 years ago. He’s had 26 surgeries and he’s frequently in the hospital.” The lovely girl puts a hand to her chest and gave a gasp. Then, because they are young and tanned and in love and because Ron and I were once all those things, too, I went on. “We’ve been married 37 years. You don’t give up on someone because they are ill.”

“Of course not,” said the girl. She gave her boyfriend a steady look.

“For better or worse,” I said and smiled.

And so for a few moments out of what has been an incredibly long journey, there is not pain or hospitals or classes to teach or bills to pay. There is just me and the ocean, listening to its soothing sound as I sit not reading my novel, just for a short space of time being.

Good for me. It is not easy to find a space of peace in the life of a caregiver. It’s worth savoring when you do.

Thanks for sharing your beach trip with us!\r\nI

Good for you for sharing with us.