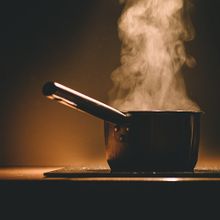 I need to vent to those who understand.

Our hot water heater decided to become a fountain Tuesday morning. Instead of delivering hot water to the first floor, it wanted to greet the holiday season acting like a fountain and was spraying water from its top!

Okay, we knew it was going to blow. And it's December--something ALWAYS happens in December. "He" went into a blue funk over this. I told him I would research a new tank while at work and off I went.

So, while expensive, I found our utility company could provide a new tank, plus have it installed. And the best part? They would finance it--interest free!--for two years with payments for it added to our monthly utility bill. Sweet deal, yes? So I called them and made all the arrangements. They were to come the next day--between 2 p.m. and 6 p.m.

So, the next day (yesterday), he never called me to let me know they had arrived so when I finished work, I called him. "Oh, they're here and gone already" and he then tells me that the tank I ordered wouldn't fit, so they gave me a smaller tank (that now didn't qualify for the two-years financing) and to pass inspection it needed a new vent pipe that would cost us around $300 more and we had to find someone to do it.

I held my tongue but I was livid. From what I understood when I made the arrangements, we had the opportunity to agree to additional charges and if we agreed, they would be done and added to the bill. I had explained all of this to him after I placed the order. How could this have happened? (Murphy's Law?)  When I got home, I called the utility company back.

God bless the gal on the other end of the phone. She was so sweet and understanding--and empathetic! After she understood what happened, she called the installer. The plumber told her that "he" said he had someone who could do the work cheaper! I assured her we did not and she assured me this could be added to the install and being so much extra that it would qualify for the two year no interest plan!

"He" got down on himself, saying he could never get anything right and he should be dead. I told him to "shut up". He continued to snap at me at every opportunity. I decided to go out and run errands for the holidays.

I tried to tell the girls last night I thought this was something easy that he could still "do" and not mess up. They told me I was wrong.

Thankfully I have a great boss, who when I shared the story said, You will be home when they come to finish the project.

It is so frustrating watching him continue to fail, both mentally and physically. I pray for strength and grace for the inevitable and, even more so, to deal with these things while he is still alive.

I mourn the loss of a love-filled marriage. He is so self-centered anymore there is no room for him to care for anyone else.  I may have to have surgery on my hand/wrist soon, and when he thinks to ask how I'm feeling with it, as soon as I start to tell him it hurts, it becomes a "can you top this" scenario so much so that I won't talk to him about my concerns any more. I don't want to burden the kids so it leaves me talking to myself or through myself like this.

I've said it before and I'll keep saying it: I absolutely LOVE Advent/Christmas/New Year's and I live in a house of Scrooges.

I am so glad you Vented!! Yes, Water heaters/Repairs/Promises are so tricky and you navigated those sticky situations so well!! You've got an awesome boss and hope you can continue to enjoy the holidays even with the \"Scrooges\" in the house.

Ugh, sorry, Hussy - I had just written a post, only one more sentence to add and now I can't find it - gone never to be seen again I think. Ha. Sorry, will dig around a bit more and hopefully I can still find it..... :-) I always LOVED gardening and I am begging to think that the Good Lord had made the decision for me, way back then, to leave technical, computer things alone and to stick to gardening....... :-) :-) :-)\r\nColette xoxo

Your hot water heater may have blown up, but amazingly you did not. I realized I was gritting my teeth as I read your post. I can totally relate to your situation -- we do the research, we find a solution for a problem, we carefully craft a fool-proof plan and they still manage to bollix it up! \"I know we agreed to do this, but then I thought it would be better to do this.\" NOOOOOO!!!!!! I've got a handyman at the house today. He arrived this AM and we went over everything before I left for work. I totally trust him; it's my husband I don't trust! I'm crossing my fingers that I don't come home to something that stands my hair on end. Vent as needed!

Thanks for making the effort to share what's going on in your heart and mind, and trusting us with these personal thoughts. I had to go back and refresh my mind on your story, and see that you've been blogging here now for a year. A year is a very long time in the caregiving world. And still you managed to hold your tongue in this situation, regain control and make new plans, express your story to your boss, share the journey with your children, know when to walk away and holiday shop. You continue to do an amazing job in a situation electric with possible emotions. I hope you can still find the opportunity to do some of the holiday things you love best.

Vent away! What an awful situation, but glad you had understanding utility rep. and boss. It just has to be so overwhelming to have those situations all lined up and then have him step in and mess it all up... and then have that be a vivid reminder of his/your journey... So so sorry.