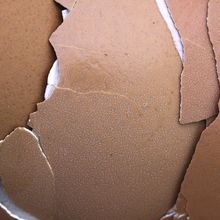 Well, my back is healing up and I am now walking upright. Woohoo!!! No more cane for me. :D

I was at my chiropractor's office today getting some treatment and I called Mom to check on her as she wasn't doing too well when I left. She answered the phone and was barely able to speak - I could tell her breathing was labored and she just wasn't well. I told her to turn on her oxygen and to try to control her breathing and I was on my way home. I raced out of the clinic and got home six minutes later to find her in extreme distress and almost hanging off the bed. She hadn't been able to turn her oxygen on and she was now hyperventilating. I quickly got her oxygen flowing and tried my best to calm her down. I spoke softly and slowly until her breathing slowed down some.

Once she was able to calm down a bit I asked what had happened.  Apparently she had gotten up to use the restroom and somehow, she doesn't know exactly how, she managed to possibly break her thumb. She made it back to her room and managed to sort of half fling her body onto the bed (normally she doesn't attempt to transfer from her bed to her chair while I am gone, but when nature calls...).

I was able to get her better adjusted onto the bed and I looked at her thumb. it doesn't look right, kinda leans a bit off to the side in a way that it never did before, and when I barely touch it, the pain is through the roof. On top of this possible broken bone, she has a broken toe on the left foot, a severely infected toe on the right foot. It's been infected for months, I have been treating it vigorously at home and have left messages for the doctors and nurses but the doctor doesn't seem to care about it, not even with her diabetes!!! I asked the nurse last week how to identify gangrene and she seemed nonchalant!

My mom had FULL body fire so she couldn't be touched and every bone in her body felt broken. I was kind of at a loss as to what to do with her! There is no way I could get her to the doctor for an x-ray and a splint, not even if I called the EMTs. No one and nothing could touch her!

I called my neighbor and asked to borrow a splint. They didn't have what I was looking for exactly but they did supply a wrist splint with thumb support. So I wrapped her hand in that and then put her arm in a sling to help ease some of the ache. Once she was calmed down enough, I ran to the pharmacy and purchased a thumb splint. I got home and got her all bandaged up.

The poor thing! I hate this disease more and more each and every day! It just attacks everything and it seems it is now weakening her bones to the point of them breaking for stupid reasons!!!

Will there ever be a day when there isn't a new injury?

I\"m certainly glad your back is better....\r\nDo you ever feel as if one thing gets better just so your can be ready for the next challenging situation?

I am overwhelmed with sadness reading your post. You are trying so hard to ease your mom's burden. I am glad to hear that you are feeling better and your back is on the way to recovery. Just know you both are in my thoughts tonight.

Oh, LH, so much! I hope this is the last thing! You both deserve a break!\r\n\r\nI'm thinking of you and your mom. I'm so glad you keep us posted. I hope you have sweet treats today. :)