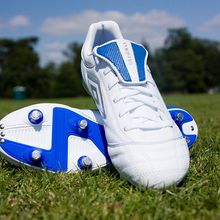 I thought it would be best to leave the room and come to the lobby and do some writing.

You are probably wondering about the title. Well, one of the things I am passionate about is a  soccer team (or football as they call it in the UK) that is located in the UK called Chelsea Football Club.

i have been a Chelsea (or Blues) as they are called for a few years now. I started watching them on TV and have followed them ever since.

i own a Chelsea jersey that I wear on days that the Blues play. Our late dog, Dakota, also had her own Chelsea jersey. I'll have to use it as an avatar one of these days.

Everything stops at our apartment when Chelsea is playing on TV. With satellite now, I can pretty much watch every Chelsea match on TV.

On my bucket list is a trip to Chelsea's home ground, Stamford Bridge in London.

Even though I am with Val here at the hospital. I can watch Chelsea play today on my iPad against West Ham

While watching the match, I'll be singing a Chelsea song to myself.

Flyin' high up in the sky.