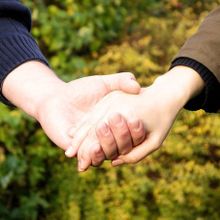 For the past 17 years I've been doing a lot of "letting go" when it comes to my husband Dean. There were so many losses involved with his brain injury. I had to let go of the man I had married . He was no longer a provider for the family, at least not in the material things of life.

He was always the handyman too, fixing almost anything you'd throw at him. But neither of us could fix what he lost with the traumatic brain injury he sustained at age 54, when a tractor ran over him lengthwise giving him multiple life-threatening injuries.

The only bright spot was that I've been able to care for him at home all these years. I knew 17 years ago he would benefit most from the care I could provide right here at home.

But now that he's aging (but only 70, mind you), several medical emergencies over the last year have brought me to the conclusion that his care would best be provided somewhere outside the home, especially due to my own respiratory problems and shortness of breath. I deal with much more fatigue than most people already.

Having hypertension, arthritis, sleep apnea, being a fall risk, losing your teeth, are not major diagnoses for the average senior. However, Dean, with his brain injury and dementia symptoms, does not fall into the category of average. Each medical issue has involved months of challenging, stressful work on my part, getting him to comply with his aging body's new demands and keeping him safe and out of the emergency room.

Our last emergency visit was a couple of weeks ago, when they found his blood sugars to be 810. He's on insulin now and in a rehab facility, trying to get this new diabetes regulated. It was the straw that broke the camel's back for me. I just knew I couldn't deal with this new major setback at home, even with the home health agency's help.

After consulting with his care coordinator and other providers, it seems right that we now try to find placement for Dean in an assisted living or long term care facility. I was the one who suggested it, so this hasn't been due to any outside pressure. I just feel the time is right. I know my limits.

Fortunately, his Medicaid waiver allows him this outside care when I can no longer provide it at home. But unfortunately, not many facilities accept Medicaid payment plans, at least for the first two years of your stay with them.

I can see the system is highly flawed, especially for those who fall in the financial middle, but we are trying to swim our way through the maze without drowning. Right now, he's staying at Homestead Rehab (the same one he was in last fall when he broke his foot). He seems to like it there alright, and loves to go to all the social activities.

I was glad to see he remembered as much as he did from being there before. He's getting more exercise, walking in the halls, more social interaction and mental stimulation than I could ever provide him at home. I think he'll thrive there on many fronts.

But I'm missing him here at home. And of course, he misses being at home. He admits that the only reason he's going along with our plans is for my health benefit. Well, that's good enough for me. I do feel rejuvenated without the stress that was wearing me down so fast.

I'm still calling myself his caregiver though. Because no matter where he lives, I'm still going to be his chief advocate. And to me, that's the biggest caregiver role of all.

(See my personal blog for more details, especially how it's impacted our faith.)

I hear so much of my story in your story and it touches my heart. May God bless as you do what has to be done.

You are his caregiver. :) Caregiving is not a location-based experience. It's an emotional one and those emotions remain regardless of where are carees live.\r\n\r\nYou are soooo strong to know and respect your limits. It seems like such an easy thing to know--limits. But in caregiving limits can become so messy because of our guilt or our need to control or our fears. You really are wise to be able to look straight at your limits and see what exactly what they say. \r\n\r\nPlease keep us posted as you work through the dratted system to find the best facility for him. And, please know you take our support with you always.