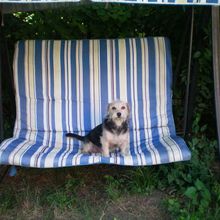 I've decided that pets are little furry four-legged angels who are here to help and they have been working over time since Gramma's been home. The one in charge is our little Terrier who keeps a constant eye on her. If he's not in her lap then he's on his bed where he can keep an eye on her since its elevated.

I work from home taking phone calls so for about 7 1/2 to 8 hours a day I'm here, but I'm not here. Scruffy lets me know if she needs help and if he can't get my attention he sends in our Rottie. Today he had an absolute tantrum when she went to let the dogs in from the backyard without her walker. Later she was walking around her recliner without her cane and Scruffy sat down right in front of her and refused to move until she started using her cane and then he was fine.

But we've realized that he does so much more than this. Before Gramma was first diagnosed with having mini strokes he had acted very dumpy around her. When she started doing better he perked back up. He started acting dumpy again and then the second one came. Needless to say, if he starts acting dumpy again we'll be heading to the doctors.

Whenever my grandmother has fallen our Rottie is usually there and has let her use her to help get into a sitting position until I get there. They are truly wonderful and loving family members. It also sounds like our Rottie is with her deflated soccer ball like yours is with her frisbee! LOL

I'm so glad that your dog is able to help you with your daughter. I think pets are under appreciated in some cases because so many can help in ways that we can't.

Your post confirms the truth pet owners understand. How comforting and loving it is to have your four legged friends stand guard and show their concern.

Thanks for sharing about Scruffy caring for Gramma. I'm always in awe at how pets play amazing roles in family caregiving.