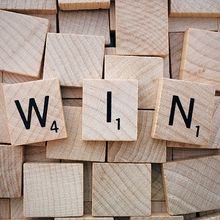 After last week, I needed a few positive things to happen.

First... last week: After thinking I had killed my father by trying to irrigate his ears and learning that I hadn't killed him, just kinda ripped a little hard wax off his ear canal which tore the sensitive skin, I paid for my negligence by taking him to his appts, shopping, and going twice a day to put drops in his other ear to help soften the ear wax in that ear. I also had grandchildren duty several days. I was exhausted and on the verge of a migraine and knew I had to make it through the next day. I woke up early last Thursday, picked Dad up and took him to his follow-up appt, then took him home, rushed home myself, fixed myself a peanut butter and honey sandwich and proceeded to eat it quickly so I could get to the school in time to pick up our grandson. My husband would have only grumbled a little bit had he been asked to do the picking up of said grandson, but he was on strict NO DRIVING while we waited for his pharmacy to screw up his seizure meds prescription one more time.

I choked on the peanut butter. Really choked. I mean really really -- can't breathe gesturing to my husband and daughter to call 911 and my husband doing the Heimlich maneuver on me while shouting at our daughter - choking. Our daughter called 911, but even I could hear the phone just ringing and ringing. Fortunately, the Heimlich worked (so far, thankfully.. and obviously, it always has) and, as no one had picked up the call yet, she just hung up. This meant my husband had to explain everything to the nice person who called us from the police station and we all had to explain to the two nice policemen who came to the house and quizzed us and obviously had expected to find domestic abuse going on. Fortunately we got all that out of the way and I still had time to go get our grandson.

That night the migraine really hit and I was down for the count all weekend. Migraine meds did little to help and by Saturday night I was in a full dystonic storm, feeling like I was being beat up. I would have gone to the ER except my husband couldn't drive and he reminded me we always have at least a 3 hour wait when we get there. I weathered the storm.

Something is shifting with Dad in the ear department because he can hear better than he has for a long time. Whew!

I got Mom's computer to connect to the Internet and figured out why it hadn't been connecting. She then asked about a particular friend whose phone number she had lost. I went to Facebook and looked up the friend and sent a message, saying Mom had been wanting to phone. Not 30 seconds after I typed the message and hit send, the phone rang and there was Mom's long lost friend. I was suddenly elevated to the realm of miracle worker, magician, and good daughter!

Then checked my email and found a message from our Medicaid consultant with the word HALLELUJAH! in the subject line. Mom and Dad are back on Medicaid as of February 1st!

I got a referral for a swallow study and therapy! Okay, while this doesn't sound like fun and sitting together and watching a video of "Breathing and Swallowing in Parkinson's Disease" isn't the most romantic way to spend an evening, I realize it's all good for our relationship. As lovely as it is to have my husband come up behind me and throw his arms around me, it's much nicer when he isn't doing the Heimlich maneuver and I'm not choking and spewing bits of bread and peanut butter across the room.

Tomorrow we'll turn off all media and spend the day doing something away from home -- after going over to give Dad his ear drops and open up Mom's computer and get her pages set for the day. We might even stop for a bite to eat. I think I'll have the applesauce.

Oh, Goldie! I'm still stuck on the choking! What a scary, scary moment. I'm going to say thank goodness your husband couldn't drive so he could save your life! \r\n\r\nYour posts are so vivid, I love how they take us in the moments. You share the reality of life when life contains elderly parents, chronic illnesses and a full family life. \r\n\r\nWhat a relief about Medicaid!! It feels like a miracle when the system does work. So glad it finally worked for you.