0
Recently The Husband got a letter from a government agency explaining he would lose part of his benefits if he didn't call them and correct the address. Okayyy, we thought that was a little strange because he had been getting correspondence from that agency at our new address for over a year. So, he called them. After waiting for 275 hours he finally got through.

Husband: Yes. I got a letter telling me I would lose some of my money...
CSA: Yes. It says we need your correct address.
Husband: I've been getting correspondence from your agency for over a year at my new address.
CSA: The system says we need your new address.
Husband: I have a letter in my hand from your agency with the correct address on it.
CSA: Yes but...let me transfer you.

He got the person's answering machine and left a message. The next day, Lo and Behold, the agency called back. My husband was informed that it was a different system and it needed the new address.

So, apparently the address thing has been straightened out. But then the agent said the person we live with has to fill out a form stating we contribute to household expenses.

I'll say this again: Even though  they've known we lived here for over a year. If The Husband does not do so he can lose part of his benefits. Yay.

I've helped family members for over ten years and I've dealt a lot with insurance companies and various other agencies. The privately-owned companies are very easy to deal with; they're helpful, friendly, and explain things well. And it's doesn't take an Act of Congress to get permission to talk to them about a loved one's needs.

However, the government-run companies are a little different. Usually the person I get a hold of  acts like I interrupted their nap and don't seem to know how to explain things very well. It's the same with correspondence; the government owned agencies send their letters out in Swahili. My cat Lucky could explain things better: 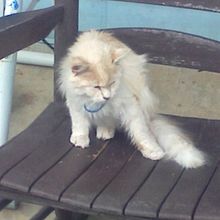