0
Friday was a little dicey. Saturday was much better!

As I pointed out in "Mooned,", my partner's most recent ER visit had occurred right around the time of the last Full Moon. She had panicked following abrasion of her ear canal (from her fingernail, after she had stuck her finger in her ear and scratched).

On Friday she again regaled me with her "CT-scan X-ray brain surgery" theories, pointing out the "symbolism" in Ammonite, a book by Nicola Griffith that she is reading. Griffith has MS.

I have not yet read Ammonite, but my partner pointed out a passage in which "three miners" had beaten a character. My partner sees hidden meaning in the text -- namely, she had experienced three CT scans while hospitalized in 1982. She believes the doctors had deliberately used the scans to give her MS.  In her words, they had "bludgeoned" her.

She reads the sentence from Griffith as a hidden message.

She was also upset that she had, multiple times, read "miners" as "minutes" and had thought the sentence was awkward until she realized her error.

She then tried to sleep in the afternoon, without success, and was awakened because she felt her legs move. That led her to believe the Requip was ineffective, even though she hadn't yet taken her dose for that day. She had taken a couple of Benadryl-equivalent pills to try to fall asleep.

She now logs the times she takes any Benadryl. She uses it infrequently because she had overdosed on its active ingredient, diphenhydramine, in October of 2011. She also believes she had overdosed in 1982, and that the overdose had landed her in the hospital. She does not remember taking those pills back then. It was only after her October 2011 overdose that she "remembered" -- pointing out that amnesia is a side effect of overdose. In other words, I have no idea whether she had actually overdosed back in 1982 or not. I was present for the overdose in 2011.

She believes the doctors in 1982 had overreacted to her diphenhydramine overdose (again, the overdose is not recorded anywhere; she had entered the hospital with aphasia and mood disorder) and had therefore deliberately given her MS. She is very angry and upset over that.

It's a repeating refrain.

On Friday she wanted me to take her to the ER again. She wanted to see a neurologist. She did not want to take her Requip.

I pointed out her emotional upset, which is not conducive to sleep.

She was angry at that, too. She told me that what I said made her think of Edgar Allen Poe's line, "Making a mockery of my horror."

We were three days away from the next Full Moon.

Part of her harangue was about how we live in an oligarchy, in which doctors run the country.

I didn't think her situation was an emergency, but saying I wouldn't take her to the ER was a tough call for me -- on the order of, "Am I withholding care?" I had to take care of myself, too. It would be different if this were a palpable emergency, but I didn't think it was.

I pointed out that after last month's ER visit, she did not follow the doctor's recommendation (to take ear drops for a couple of days and then see her GP for a follow-up). She said her ear was okay now. I didn't think we'd had an emergency then, either, but I had given in to her panic.

During February's ER visit (which was not around the time of the Full Moon), when her body had flushed and her pulse ran high, she was fine after she had eaten an energy bar on the way over and her vitals were back to normal. I had asked the doctor if this could have been a reaction to Synthroid (which she had begun taking not long before). He said no, but my partner believes otherwise. She hasn't had that kind of reaction since. The doc had said to take Benadryl if it happens again. For all intents and purposes, that reaction is still a mystery.

But MS can be like that. It can include false exacerbations, in which case the best thing to do is wait. According to the National MS Society, "To be a true exacerbation, the attack must last at least 24 hours and be separated from the previous attack by at least 30 days." I read that statement to my partner.

I shut and locked my door because my partner was after me to get my "emotional reaction" to what she was saying. I tried to beg off, but she pressed on, saying it was unfair that I wasn't giving her my emotional reaction.

So I raised my voice. Which she didn't like.

Then I lowered my voice, but my tone was sarcastic (let's just say I wasn't at my best). She didn't like that, either. I was frustrated beyond all get-out and just wanted her to Go. Away.

After a while, things began to calm down.

We had a better discussion later on. Partner was pressing me for my beliefs about her beliefs. I kept resisting because, as I told her, I respect her need to believe what she believes. She knows that I do not share her beliefs. I'd also been following the guidance that advises against trying to talk someone out of a delusion.

But she really wanted to know and asked me for a single example to start with. I felt caught between a rock and a hard place. Finally I said that the most polite way I could think of to put it was that I chalked her CT-scan X-ray brain surgery theory up to paranoia.

She wrote it down on an index card, front and back, along with questions for the neurologist when we see him next month, and for the hospital where she had stayed in 1982 (I've removed actual names): 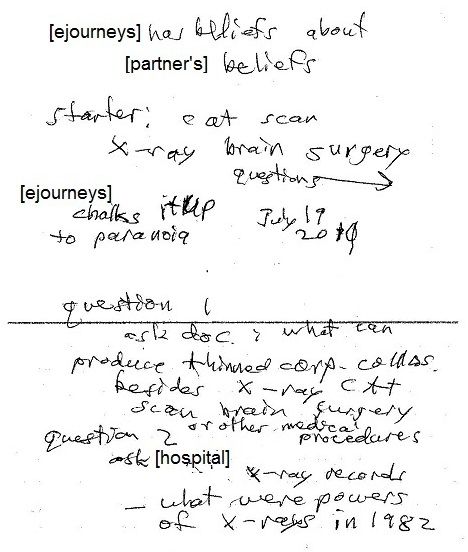 She told me our discussion had helped her shoulders un-tense. (Whew!) And, she was able to sleep. (Double-whew!) Plus, she had taken her Requip. (Triple-whew!)

On Saturday we celebrated her birthday. (I can't help but wonder if her upcoming birthday might also have been a source of stress.)

A friend of mine is a dance teacher (and wears several additional hats). My partner felt up to attending a dance recital to benefit one of the students, who is recovering from a near-fatal accident. Still in a wheelchair, the girl joined her classmates on stage for several routines, to a huge ovation.

Both my partner and I enjoyed the recital very much. At one point anyone who wanted to dance could come to the stage and we did a (very easy) routine together. I love to dance, so I joined them, encouraged and supported by my partner, who pushed me to get up there. :-) I also wore my beaded vest, which now fits me for the first time in probably over a decade. :-)

We then had a terrific dinner out. It was a great day, especially coming after Friday's panic. 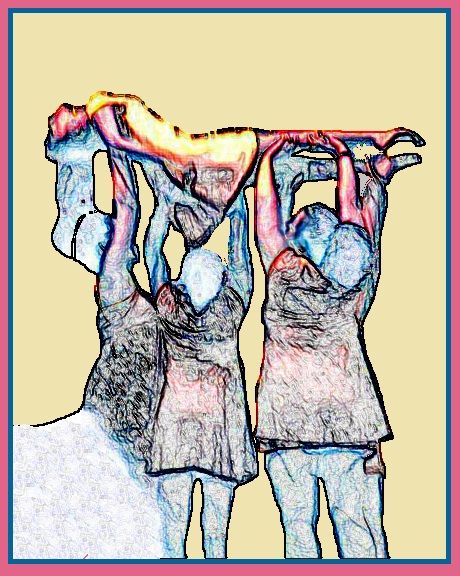 (Several dancers at the recital. I've altered the shot to preserve their privacy.)

I've been on the other side where I think everything with Marc is an emergency. So, I can see it from both perspectives. Panic is it's own emergency to some people. I am glad things calmed down and you were able to have fun :)

Hi EJ--I completely understand the worry about whether or not you're decision not to go the ER is the right one. I can only imagine how difficult it is to understand what's real, when so much that's real to your partner is simply her disease speaking. I wonder if it help you to write out what's a true emergency for your partner that dictates a visit to the ER. Perhaps referring to the list can help you feel confident when you have to defuse your partner's wishes when her decisions are dictated by her disease rather than by what's real.\r\n\r\nI love that you were able to dance yesterday. And, how awesome is it to dance wearing what you couldn't wear a year ago. !!! I love the photo of the dancers, which symbolizes what the event was all about--helping each other. \r\n\r\nHappy Birthday to your partner. :)