(This is the second in a series, Meet a Support Group. Today, @deborah, who cared for her mother-in-law and cares for her mother, shows us her support groups.)

Caregiving.com: Tell us about your group--how it started, how long it's been going, who hosts or sponsors your group, where you meet and how often you meet.
Deborah: Both groups are Alzheimer's Association Caregiver Support Groups - Western Carolina:

The Greensboro group has been meeting for about 15 years and was started by Norma who at the time was a social worker at a local nursing facility. She was the leader until 2008 when a job change meant she couldn't continue and asked me to help so we didn't have to look for someone from outside the group to come in to lead it. I've been facilitating the group since.

Caregiving.com: Tell us about the members of your group.
Deborah: The group in High Point is mostly women, but there are a few men. Most of the people are caring for a parent or spouse, and are able to pay for help with in home care or have them in nice assisted facilities. The group is small, about two to five per meeting, and tend to be newer to the caregiving experience.

The Greensboro group is larger, averaging eight to 12 at each meeting. It averages 30% men to 70% women, although it's often 50% of each. The group usually has one or two new members each month, has kept a steady attendance level, and there's a strong core of those who attend. They are really nice, open people who are willing to share their knowledge, emotional energy and encouragement with others. They are very compassionate people who are realistic about the issues, challenges and positive aspects of caring for those you love.

Caregiving.com: Tell us about your group's purpose. How do you hope to help each other?
Deborah: We want you to leave knowing you have more control and power over your situation than you did when you walked in. We want you to know you are not alone, that everyone is overwhelmed, upset, stressed, crazy, but that this too shall pass and in the end you will survive the experience and be a stronger and better person for the experience. You will not fail.

Caregiving.com: Tell us about some of your favorite moments or meetings or speakers or topics.
Deborah: Mr. Bowen was our favorite person. He was a member of the group for more than 15 years. I knew him for ten. The first day I came into the group he watched me, sitting quietly and listening. Mr. Bowen didn't talk much, unless someone new came in really distressed. He would point at me and tell new people who were overwhelmed, "Look at her, she was a mess. A mess. She was just like you, came in here crying and lost about what to do. But she kept coming and it's been ten years now. Look at her! You'll be like that one day, just keep coming to this group and we'll help you through this, isn't that right, Deborah?"

He had cared for his wife many, many years, because he said he "owed it to her" for all the years she'd put up with him. He loved her dearly. When she started going to daycare she needed to be "tricked" into attending, so he told her she was going to "work" there and help take care of the old people. At the end of the first week she wanted to know why she didn't get paid, so he put $20 in an envelope with her name on it and the next week the day care people handed the envelope to her for her wages. She'd give it to him Friday nights, he'd take it back to the daycare Monday mornings, and the cycle continued. Until she asked for a raise six months later, so he started putting $25 in the envelope, and gave her a $5 raise every six months.

When she entered the memory care facility he went every day to feed her breakfast, lunch and dinner with their dog Peaches, a Jack Russell. After she died he continued going to feed others, because he knew he'd just curl up and die if he didn't. He was a sweet, kind, caring man. I'll never forget the night he called me just after his wife died asking for help because of a serious family issue, and this so far very private man told me everything that had happened, trusted me with very personal information about his family. A few weeks later as we were finishing a phone call before I was to go to the hospital for surgery, before he hung up he said, "I love you, Deborah." Those words meant the world to me, for I admired and respected him so much.

I felt very close to Mr. Bowen, as did so many others, and he knew we were always around to help if needed. This last summer he called to talk many times about finding a place to live if he couldn't stay in his home with his daughter. During Father's Day his son came from Detroit and the three of us visited the VA to sign him up for benefits, we had lunch and talked about options for his future and other family issues that he was trying to settle. Less than a week later his son called to tell me that Mr. Bowen was in the hospital ICU with symptoms from CHF and a UTI. I went to visit him when he was moved to the step down unit the following Tuesday, and he wasn't doing well, but he was positive. We had a good conversation, he was positive, and we saw the most magnificent thunderstorm from the window of his room with wild lightening. I'd planned to go see him again two days later, but his son called from the airport early that morning in Detroit to tell me that Mr. Bowen had just passed away and he was on his way to Greensboro and he wanted me to know.

His funeral was the day of our next support group meeting, and about half of us left early to attend. It was amazing to see the rest of his life, and they were surprised to meet the people who knew his caregiving life. We were honored to teach his church family and his real family what a remarkable man Mr. Bowen had been as a friend, caregiver and husband.

Caregiving.com: Tell us about the upcoming meetings you have planned.
Deborah: We have a few special speakers a year. In 2016 we hope to have a doctor from Wake Forest University Baptist Medical Center's Sticht Center talk to us about their current programs and research studies on dementia (http://www.wakehealth.edu/agingresearch/); have a nighttime Virtual Dementia Program at a local Assisted Living Facility to allow people who weren't able to attend the daytime event to participate; and have social workers from Adult Social Services and VA Benefits Offices come talk about what programs are available and how to apply.

Caregiving.com: What suggestions would you offer to others considering starting a similar group?
Deborah: Just start. You can get free brochures from the NIH, so go online and pick out the topics your group will focus on. Go to local community support programs and get brochures for those services, and ask questions about their services.

Pick a good time and location for the largest audience. It should have free access, have enough free parking and be in a safe area of your community. Ask local churches, rec centers, nursing or assisted living facilities for a meeting room. Make sure the time of the meeting doesn't conflict with a meal time - so avoid noon hours, times around dinner, late night hours. Start with an hour meeting and consider up to two hours, depending on the size and needs of the group. All these ideas depend on the kind of group you want, you might meet in a coffee house and change the times you meet each time because of shift workers or class schedules, cater to your group.

Advertise in local free newspapers, at churches in the area, senior centers, other support groups, nursing and assisted living facilities and through social media like Facebook (ask friends to repost, community services pages, etc.), hospital social workers, doctor offices. Again the way to get the word out depends on your group and who you are trying to reach.

Have coffee/soda and snacks, again depending on the group. Food changes the dynamics of the group. People are more relaxed with food. You may be able to talk the local donut shop into donating a dozen and coffee each month, or a business may sponsor the snacks each month. Make the room comfortable, temperature, light, the table or chairs. It's best to have a round table or chair grouping so everyone can see the others, people talk better that way. Have a "sissy box" (our group's name for a box of kleenex).

Be flexible. Have a storm plan, if school is cancelled because of a weather situation, then the group is cancelled, etc. Have an "attendance" list for phone numbers, names, addresses and email addresses. This gives you several ways to get in touch with people if needed. I send out a reminder a few days before the meeting to remind people of the meeting and to share any new information, any new info about programs or research and treatment. Have a backup plan if you can't attend. Watch the people in the group and ask someone to take over if you can't attend so the group goes on even if you can't.

Start meeting and adjust as needed. You'll be surprised, it will go well.

Caregiving.com: Please feel free to include any additional information about your group you'd like us to know.
Deborah: I don't have photos to share because our groups are anonymous, so people feel free to say what they want and don't have to worry that anything will get out in public that may identify them or cause worry for their family. But thanks to a Swamp Family Member I did include this: 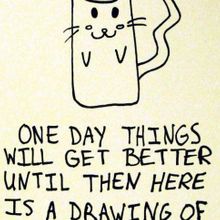 Thank you so much <a href='http://www.caregiving.com/members/deborah/' rel=\"nofollow\">@deborah</a> for sharing your support groups with us. I loved meeting Mr. Bowen.

Hi Deborah, I enjoyed reading about your groups. It sounds like you and your members are doing a great job of supporting each other and I loved the cat drawing..