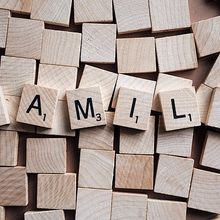 Friends seem surprised when I say I do not see myself as family oriented. I am 65 years old and 33 years sober and clean. This puts my mommy years smack in the middle of all the chaos of my drinking, drugging, awful lifestyle choices and all the associated trauma. I have judged myself for years based on those years The years when I loved my children more than I loved my own breath yet abandoned them, if not in body, from having a healthy, functioning mother. I have spent many years beating myself up and making the assumption that everything that could be said about my 65 years was said and done during "those" years. I could relate funny stories of how I believed I was not providing one thing or the other only to find out that I was providing that thing but was completely blind to what I needed to be providing. At best the love I had for my children confused me and them. I loved with all my heart and I protected with my broken part. What does this have to do with the topic of this writing?

For whatever reasons my life circumstances and those of my husband's have brought people into our lives on a more intimate level than I allowed in my "other" world. Though outgoing with a flair for the dramatic I am also an introvert who has kept most of my cards close to my chest and have made our home a veritable fortress. This means we do not invite people into our home. My husband does not go out. I go out to see friends and family and I love them all. I have many friends who love me and I love them. Until my husband began showing symptoms that were impossible to ignore of something we did not know we spent little time together. He fished constantly and after work, I spent time with friends, my folks, church family and family. There had been many, many indications that something was wrong on a number of levels. I kept these times to myself. They involved psych ward visits, multiple medications, disappearances from home for up to a week at a time, a period of respite and then another cycle. I cannot say that all of this related to the formal diagnosis of Frontal Temporal Degeneration. I have done in-depth reading of FTD and I believe part of the long slide to the loss of the use of his legs began at least several years before that loss. It is this turn of events that brought me out into the open along with my husband. Suddenly we were visible at the doctor's, at the emergency rooms, at the nursing homes with the rehabilitation teams and in our home as home health care and social services began to involve themselves in our lives.

In retrospect, the process of becoming visible happened in the shock and after-shock of the changes that were coming at us one after the other. My husband learned to hear himself discussed and poked and prodded by complete strangers. I learned to speak up and advocate for him, inform medical personnel, hear the tough news, sign papers one after the other and listen. In different ways we have come to trust and depend on people in our lives. People aware of us. People who care and want to be involved. People we will never meet who help me through chat rooms and organizations on the internet. Both of us, intensely private in our own ways, have become visible and in need of being visible. It is in this new part of our lives that I began having people identify me as an intensely family oriented woman. The first time I heard those words I looked around outside and inside myself and made no reply. This person clearly did not know me. I was a failure at being family oriented. Look at my history, I wanted to say, but I remained quiet. At first these were professionals who expressed admiration and encouragement to me as an intensely family oriented person. I heard the words and I wanted them to be true. I so wanted that to be about me but I knew I had failed and I knew they did not know I had failed. I allowed the words to be said without my input. The story was too long to tell and no one seemed to want to hear anything about me that had to do with how I had failed at anything, let alone being family oriented. And so, I lived in this world of caregiving my husband, interacting with strangers, asking God for strength and once in awhile I took a peek at the idea that there were people who saw me as an intensely family oriented person.

But, that is not the end of my story. Friends began to identify that trait in me. They were surprised that I did not know that about myself. With friends I could argue, point to the obvious shortcomings of my past and still they persisted. They would not allow me to change their perceptions of me and they would point out where I was wrong and how I needed to wake up and accept reality.

So what does this have to do with my topic?

We have four indoor cats. They are all adopted and we have had them for several years now. Each one has a distinct personality and there are times when I would love to drop kick each one of them out the door and into the street. In addition I feed and water two outside cats who found out there is free food on this corner and now they are family by proxy. My husband loves to grouse about all these cats and how did he let this happen and I stumble over them uttering words not meant for paper and I clean the litter and buy treats and one by one they each spend time with me for snuggles, peeling off with their claws (because I do not believe in declawing), leaving scratch marks that led one doctor to ask if I had started cutting myself. "Oh yes, doctor, I am 65 years old and have seen heaven and have seen hell, and now, now of all times, I have decided to start cutting myself!" I answered sarcastically. I explained the cats, got a roll of the eyes for my trouble and left carrying my battle scars with me.

My black and scrawny cat goes outside and comes home or I go and chase him down and bring him in when it is time to come back to the house. All of us know this game and all of us (my husband, myself and the cats) know the ending. But, about four days ago, the golden orange cat with the golden yellow eyes shot out the door, rounded the corner and ran off the deck. He has done this before and he has always come home in a day or so. I started to chase after him but threw a choice word at him as his fat, house-fed buttocks rounded the corner of the trailer and disappeared. He will come home soon is what I told my husband on the first day. On the second day my husband told me that he will find his way home when he is ready. By the third day I am wondering if he is lost or off in the field with the feral cats playing and forgetting his home. The two outside cats are not giving up any clues. My heart is sinking. I love that orange cat. The big, white and so un-siamese Siamese cat is walking around the house quietly, going into rooms he never visits, creeping along quietly and I realize he misses the orange cat. I miss the orange cat. My heart is starting to fill with sadness as I pick up the siamese and hold him tightly. He is not interested in me. He wants down. He misses our friend. He likes to wrestle with him and bite him and make him scream that awful cat howl. So, I say a prayer and I let it go and I check outside once in awhile and no orange cat. I want him home. I worry about him. He is a part of us.

Last night, just as it got dark outside, I stepped outside to see if that orange head would pop out from the trailer underpinning. Nope. An opossum ran out and the two outside cats ran towards me as I took the garbage out. I was pondering the oppossum trying to remember if I should be alarmed or not when up jumped the orange cat onto the opposite side of the deck. He gave me a look. He gave the two cats a look and turned as if to leave. He is easily frightened. I called his name. "Tigger! Tigger Come here, Tigger!" He paused and I swooped down and grabbed him and hugged him and whispered happy stuff into his ears and opened the front door for him to jump inside.

He was disoriented. He clearly had not meant to be gone so long. The other cats began sniffing him to discern where he had been and catch the scent of adventure. The siamese cat approached him, backed off and later made overtures at him to engage him in a small battle. But the orange cat followed me around. He came into my room and mewed until I picked him up. I put him down. He mewed again. O.K., I thought, you want me to go into the living room and stay where you like to stay. You want to feel safe and you want me. I got up, stretched out on the sofa with my husband stretched out on the other sofa and four cats finding their individual spots. The orange cat stopped mewing. I slept.

In the morning my husband told me I was surrounded by three cats as I slept. The black cat is too cool to find himself in that number. I looked over later and I saw the orange cat gently reach out one paw and put it on the white cat. I watched him snuggle down a bit with that outstretched paw and I felt so happy, so happy deep inside. This afternoon I understood. This afternoon I believed. I am an intensely family-oriented woman. I love my family, I love my animals, I love my friends and I love loving them. I get it. I understand now. A deep sense of peace entered me as I saw it for myself and I claimed it. I am an intensely, family-oriented woman.