Peggikaye
I sat in the Social Security Administration next to my 21-year-old son -- it was crowded. The day after a holiday is probably not the day to take care of the business of every day stuff. The office was filled with new wives changing their names, newly disabled people whose faces showed the strain of filing for something they desperately needed and hated the idea of getting, people on the verge of retirement getting ready to change their lives forever. The faces told their stories -- probably more than they wanted.

I was there to fix a snafu with my name. No big deal. A hassle but nothing else. (A big one, a funny one, but a hassle that had to be fixed before I could get a job after I graduate.) My son was with me to replace his SS card after his wallet was stolen.

We were stuck in a corner -- the two of us jammed into a corner like a couple of sardines. There were about 25 more people than seats, so we counted ourselves lucky that our two-hour wait was seated. We talked and talked.

He'd had his heart-broken and, for the first hour, the talk was over the girl he'd brought home for Christmas. This was supposed to be his forever girl. She did not break up. He did. He took a stand for integrity and because he did not deserve to be lied to. That didn't help to lessen the pain.

He got quiet for a few minutes and I thought he was thinking about her. And then he said,

"Yeah, Benjamin, he's not ok. But ... we don't know ... it could be tomorrow, next month, next year or 10 years .. we just don't know. There aren't enough polio survivors for them to tell us -- and there aren't ANY scoliosis patients that are this bad for them to have any basis for prediction ...the combination of the two? They have no prognosis."

"Mom, he's not ok." The tears fell freely in front of all those people. My 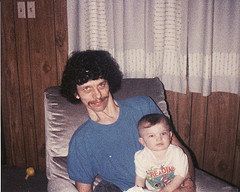 21-year-old, 250-pound son, was crying and I couldn't pick him up and hold him. This isn't a skinned knee or neighborhood bully. This is a bully of the worst kind and we can't fight back.

"I hate that I wasted so much time fighting with him over music instead of getting to know him as him."

He has three days a week that he's not ever doing anything. He's decided to come home for those three days every week. He wants to get to know his Dad, help his Dad...be with his Dad.

Peggikaye, you and your husband raised a beautiful son, with both great heart and great resilience. (((Hugs))) to you all.

Thank you all so much. \r\n\r\nBob, they really didn't have the generational gap type separation. They just butted heads. We had no rebellion from either son. Both kids felt free to express opinions (which is what Benjamin is now referring to fights -- they got into heated debates over opinions on music .. he now wishes he'd just let his Dad have his way and, ya know, that'd not have been good for either of them ... his being able to have those debates helped him to form some very important interpersonal skills, integrity and critical thinking skills)

Same happened with me and my dad PeggiKaye--we called it the generation gap youmay remember. I'm so grateful that my dad and I healed our relationship. He had Altzheimers the last six years of his life. Imagine my joy when very often he would remember my name. I get teary thinking about it. I'm grateful to God that he died peacefully. My mother took care of him those six years of his life at home until the last three weeks when it was time for him to go into an Altheimers Unit as my mother could not handle him at home any longer because he was getting aggressive. He passed away about two weeks later--just kind of fell asleep and a few days later took his last breath. My thoughts and prayers are with you, your son, and your husband. Bob

Peggikaye,\r\n That broke my heart! SO sorry you our having to go through this right now!\r\nHugs from Kansas!\r\nMaria

Hi Peggikaye--What a wonderful son you and your husband have raised. His wisdom will enrich his life, as his visits with his dad will enrich all of yours. \r\n\r\nPlease keep us posted.