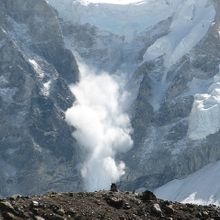 Mom's been in a steady decline for about two years now. First a heart attack, then kidney failure, and now it's obvious to me and everyone else, except Dad, that she's got some form of dementia.

My dad insists on doing everything himself, will admit that bringing in outside help is a good idea but he just won't act on it. Mom can't be left alone anymore, not for more than five minutes. She has gone from using a walker to a wheelchair, and her dementia has gone from vivid recollections of events that never happened to violent, angry outbursts. I feel very sad for her -- she was always a very competent and active woman. It has to be terrible for her now.

But it's my dad I really worry about. He seems to irritate her so much these days (rather like the way I always used to) and he's very clearly showing the strain. At the rate things are going, he's going to be the next one having a heart attack or worse.

I am seriously considering calling their PCP, and trying to convince her to have a long-overdue talk with my dad. Because, even though he calls me for advice and help, he won't act on my suggestions. And something has simply got to give.

Thank You for your kind words. My parent's doctor is also Grandma's, and the PCP for many of my former clients. So she and I are already acquainted. This doctor is in great demand, books appointments weeks in advance, and isn't in her office on Fridays. Getting in to actually speak in person may be difficult. I put a call in to her office today, haven't heard back yet. I'd be happy to just get in a quick chat over the phone. I'll need to give alot of thought to what I want to say, and how to say it. \r\nThank you again.

Hi Desiree, \r\n\r\nOh, my gosh, what an upsetting and overwhelming situation.\r\n\r\nWhen my dad was overwhelmed with my mom's medical crisis and his own medical issues, I did rely on his PCP to set limits. I think calling the PCP is a great idea. Perhaps you could give her a heads-up before the appointment (like sending her an email) so she's aware of your concerns and can address them effectively.\r\n\r\nI think Jean's got a good idea -- that your dad may be too overwhelmed to take action. Perhaps you could say, \"Dad, I want you to focus on being there for Mom. I'm going to take care of what we've agreed to -- getting more help.\" \r\n\r\nI'm so glad you blogged. Keep us posted as you can.

An additional thought... Would it work for you to set up outside help for them or at least start the process like making appointment for in-home interview? Your dad might be too overwhelmed to take action.

Desiree, I think calling your parents PCP is a really good idea. We made appointment with my MIL's PCP years ago and told him our concerns. When we took MIL to see doctor, I was surprised to hear her agree that she needed help. Coming from the doctor was more credibility than our advise. \r\n\r\nMy mother had Alzheimers and my MIL vascular dementia. They both went through period of being very angry and nasty (really out of character for both) and my MIL actually got violent at one point during a nursing home stay. But when they both got dementia care, their anger subsided... truly a blessing.\r\n\r\nHopefully hearing an assessment from his doctor will crack your dad's denial. It has to be so terribly frustrating and stressful for you to witness. No one can get the help they need when the problem isn't named. I'll pray that he will see the light! Hugs.