0
(From the Community Caregiving Journal 3-word prompt Before, Flood, Right.)

According to the dermatologist, there is a small chance that I have an early actinic keratosis, which could lead to a squamous cell carcinoma. Then again, it could be a bug bite.

Bottom line: If it doesn't go away before the end of 2-3 weeks, I need to see him again. In the meantime, I have a steroid cream to help in getting rid of it and decrease the chance of any lasting marks.

The office had left a reminder message on Wednesday, which prompted my partner to ask me what this was all about. After I told her, she offered up a flood of explanations, including that I could have been snagged in the face by a morning glory vine. I explained that I hadn't been near a morning glory in months, if not years. (I had gotten some arm irritation from morning glory vines when I kept a community garden plot years ago. What's on my face is not that.)

She proceeded to bring up a litany of other plants and how they snag people. I reminded her that I haven't done yard work in months and reminded myself that at least she wasn't going on about skin cancers.

She went on about skin cancers on Thursday. Those worries paled, however, beside her fretting about the front door. She's still upset about the man who stopped by to ask if the house was for sale. She proposed keeping a disposable camera by the front door, so that we could photograph any strangers who rang our bell and then call the police on them, before they forced their way into the house.

She is not, however, worried about using her fifth burner as a space heater. I do not use the word "hate" lightly, but I hate that coil with the force of ten thousand suns.

Here she's put the coil on cork and covered it with a utensil normally used to drain pasta. The handle doesn't get hot. Notice its strategic placement smack dab in the middle of foot traffic, requiring us to be Jills Be Nimble. The schmutzy hallway used to be much schmutzier. The white cardboard pieces are warnings: hot stuff ahead! o_O

She liked that I took a picture of her arrangement, of which she is quite proud. O_o Our negotiations have progressed to agreements that (1) absent natural light, a light near the burner will be on at all times that the burner is on; and (2) one of us has to be awake while the burner is on. (I have found her sleeping on the floor near the burner and have turned it off.)

She doesn't like the blowing from our central heating and has not found a space heater without a fan that she would want to use. She wants the burner near the thermostat so that it fools the thermostat into believing the house is warmer than it actually is, before it can register the cold. That way, the central heating doesn't blow as often, while the burner adds some heat on its own.

That's her, standing in the background (she doesn't like socks, either). Behind her is a fire extinguisher that I relocated from the kitchen. I want to flood her precious coil with extinguisher foam and then take a hammer to it -- but then she has her backup burner.

I have since picked up two additional fire extinguishers, along with a kennel for the coil. She didn't like the kennel at first, but she is now using it, having relocated some schmutz. 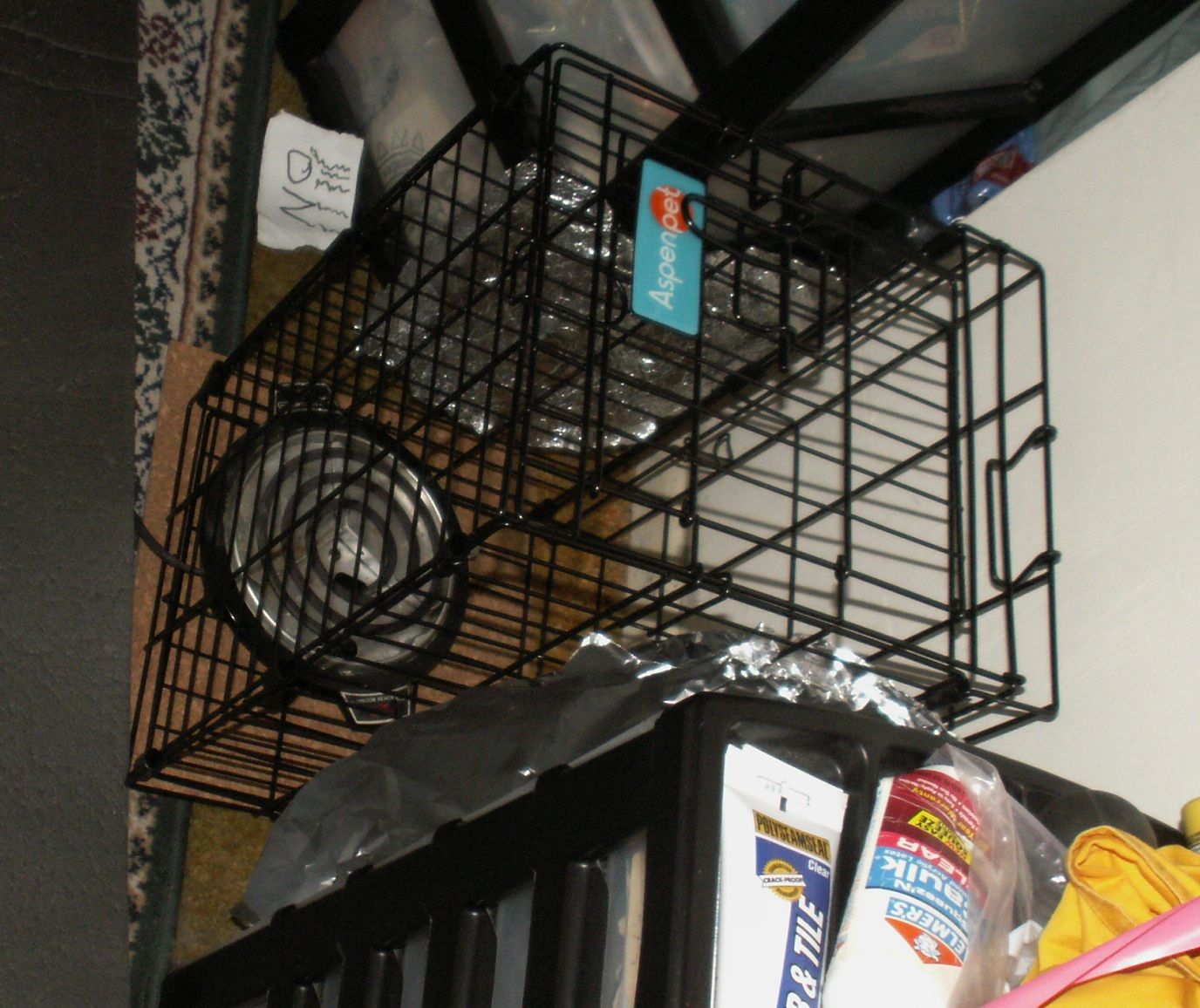 At least now the blasted thing is out of foot traffic. But as long as we have cold weather, I'm being as vigilant as I can be as far as safety goes. Fortunately this is Florida, but we still get our version of winter. We had a freeze last night (another one is expected tonight) and it was still in the 30s when I left for the dermatologist.

After my appointment I picked up a few groceries. As I took jaunty steps back to my car, a woman called out to me that she liked my smile. She asked me how I keep smiling.

After a moment's thought I said, "It boils down to the fact that I'm still on this side of the grass."

I mentioned that I'm a caregiver, which tends to boil things down. Turns out she's one, too, and would be right at home in the sandwich shop group (which I also mentioned).

We talked for a while, hugged. She's new to the area. I popped back to my car and pulled out a Caregiving.com flyer for her. I believe we made each other's day. :-)

Thanks, Kathy! Yep, it's definitely one day/one moment at a time here! :-) A case of what can I do/how can I do it/what are the potential consequences? Brainstorming cocktail with a blind faith chaser. :-)

Thanks, G-J! As I said in the chat this morning, your comment inspired me to work on a blog entry. In my case, I see a fine line between \"sainthood\" and \"learned helplessness\" :-)\r\n\r\nI sometimes practice therapeutic lying or, more commonly, complete omission. In this case my partner was already going down her list of plants. One of her suggestions was that I'd been snagged by a bug on the skunkvine that's been climbing our elm (and which I hadn't been near in months). She worries about the skunkvine, too. And she was adding in stories about her encounters with plants over the years -- so for the most part I just listened. I can see her wanting to hunt down the offending plant, too, and talking about that at length; but right now she's more distracted by our persnickety toilet. She also wants to ask the sheriff's office if Roto-Rooter has robbed anyone after they've been let into the house. I've told her that we'll deal with the toilet (which needs attention but is not dire) after this round of medical appointments has ended.

Thanks, <a href='http://www.m40.siteground.biz/~caregiv6/members/gail/' rel=\"nofollow\">@gail</a>, and thanks for your prayers! If you click where I've typed \"Caregiving.com flyer\" it will take you to a .pdf of the flyer itself. You can save the .pdf file to your computer and print out however many copies you want. I print out a bunch and keep them on a clipboard inside a Caregiving.com tote bag that lives in my car. :-)

EJ--You light up the world. :) That's what the other caregiver saw in you. I'm so glad you made the connection with her. \r\n\r\nHow did it feel to say that you're a caregiver?\r\n\r\n(Thank you soooo much for spreading the word!)\r\n\r\nI would like to hand you a hammer. How frustrating to have to live with the \"burner as a space heater.\" That's the worst kind of roommate. \r\n\r\nI'm so very glad you made the right call.\r\n\r\nThinking of you today and wishing for warm weather to arrive and stay.