The music blared out, full volume, from the stereo speakers. I was walking home from high school and when I was still three houses down from ours, I could hear the music as clearly as if I was standing at the door. Inwardly I cringed. Outwardly, I cringed, too. Already, the neighbors were opening their doors and glaring at our house. They knew, as I knew, it wouldn't help to complain. Mom would let them know, in no uncertain terms, she could listen to her music however she wanted.

The door actually shook in my hands as I walked in the house. Mom was there, in the middle of the room with her hands on her hips. Her lips were pursed and she was staring out the front window. I thought it best to try and slide by and get out of her way.

"I'VE BEEN INCLINED TO BELIEVE THEY NEVER WOULD..."

"Who's making dinner tonight," Mom was still staring, but she had seen me.

"I don't know, Mom. I've got homework," was the reply I gave her everyday. She said I'd need to work it out with my sister because one of us needed to make dinner. That, too, was the daily response. 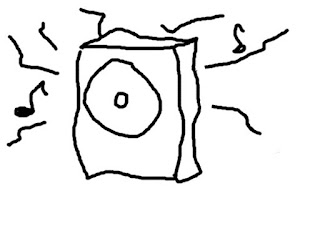 I grumbled and hurried down to my basement bedroom and closed the door. The music rumbled on, back to John Denver and "COUNTRY ROADS TAKE ME HOME TO THE PLACE I BELONG". Later, I found out our
neighbor had called over to her in a friendly way asking if maybe she'd like to turn the volume up a little. His cousin, three blocks away, was having a hard time hearing it. Mom was not amused.

Looking back, whenever the music was at full volume, it was a signal that something was off with her. At the time, I was more embarrassed than anything.

Fast forward again to 2009. Things were getting harder at home for Dad and I told him to call whenever he needed me. If he couldn't talk, he was just to say, "I need you" and hang up. I would come. The calls were coming more and more frequently. One day I walked into the house to the music blaring again...


"LAMB OF GOD YOU TAKE AWAY THE SINS OF THE WORLD"

I am certain John Michael Talbot did not intend for his liturgical music to be played at that volume. And there was Mom, sitting in her recliner, staring at me with her lips pursed. I wanted to be anywhere but right there.

"You just sit down and listen to this. Maybe you'll learn something."

"HAVE MERCY ON US"

I had come over to help and figured the best thing I could do is just sit and let Mom go on with her lecture. At least I was giving Dad a break. Mom couldn't articulate just what I had done to anger her, I don't think she really knew, but from then on, I always knew when I was in trouble. From three houses down as I drove up their block, I could hear John Michael Talbot roaring his meditative music at me. I like John Michael Talbot. I've met him. He's a very nice man. But I cannot listen to his music anymore without seeing Mom's glaring eyes and pursed lips.

Dad and I looked at each other.

"GRANT US PEACE", the stereo bellowed.

"Amen," Dad said, with a completely straight face, then, turning his head ever so slightly, he gave me just a hint of a grin and winked.

They are doing much better now that they are in assisted living and Mom's meds are tightly controlled, as in, she has no access to them. The music isn't as noticeable, either. Just about everyone listens to music or TV at a very high volume. She has friends. Everyone says, "Your parents are so sweet!" She doesn't glare at me so often and she's probably nicer to me now than she's ever been.

I wish I could enjoy her more, but I'm always on alert. The switch can happen in an instant--no full moon or magic potions necessary. I guess I'll just count on music to keep one of us calm, anyway.

Without my Dad's gentle sense of humor, I may have ended up just as angry and bitter as my mom. At some point, I started coming home and telling my husband \"I TAKE AFTER MY DAD!\" Graciously, my husband would smile and say \"Yes, dear\".

Goldie, your writing keeps me glued to the story and I can just feel the tension and humor. I'm glad you are sharing your history and present journey with us.

You are taking me to places I really wouldn't choose to go, but I know you went there and you had no choice. Your ability to bring me there is powerful. And you remind me that coming out \"normal\" from the other side is possible. It's like watching an auto accident and glad you aren't in it. But you still have to watch. Thank you for sharing your writing skills with us here; you are sharing an aspect of life I, for one, am curious about and find so helpful.....