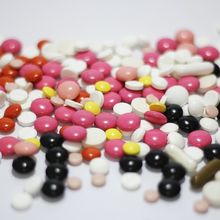 Thanks so much to all who commented with kind and supportive words to my last post. I'm feeling a little guilty for being inactive on the site, taking some support when I need it but not being around to give it back.

Mom is having pain or discomfort in her lower abdomen these days. It feels to her like bladder pain, but it's a constant ache rather than the burning pain typical of a UTI. I took her to a walk-in clinic last Sunday and the person we saw there started her on an antibiotic, but called back on Thursday to say that the culture had come back negative. So on Friday, we saw her internist, who did a more detailed exam, including a pelvic exam, but she didn't find anything. So Mom will have a CT scan sometime in the near future--they're supposed to call me to schedule it.

She's taking AZO and Tylenol for the pain. Although her pill caddy is a system that works, over-the-counter medicine is a big disruption in her routine. She has been getting hopelessly mixed up about what to take when and not remembering what she already took. When we got the AZO, I opened it up and took out the first dose and gave it to her and she took it with a glass of water. We talked for a few minutes about how we hoped it would help and then I was getting ready to go upstairs, she said, "Well, I'd better take that medicine," reaching for the AZO. Hmmm. I took the AZO upstairs for the night. The Tylenol is a problem too because she could really overdose on that. She can't remember that it's every six hours, or when a six-hour period begins and ends. During this busy day, I repeatedly asked if she'd taken anything. When I knew she had taken a Tylenol, I put a note on the cabinet: Took Tylenol @ 2:00, no more Tylenol till 8:00. I thought that was working, but then she revealed that she wasn't sure if the dose was one or two pills. I wrote "ONE pill" on the note. Is it enough?

I'm trying to protect my time and come up with systems where she can still operate without my constant supervision. But am I getting it right? If she overdosed on something, I think it would be my fault. It's hard to know when to completely take over.

She seems more aware of her memory problems lately, and says frequently, "Everything gets mixed up."

And yet, she still seems to manage her daily activities okay. She still makes coffee every morning, still bathes regularly and dresses herself appropriately--unless we go out, in which case I must always remind her to take her sweater! She still feeds herself breakfast (Cheerios with blueberries) and lunch (a chicken pot pie, usually) and I take care of dinner. She still drinks wine moderately--at least, I haven't been aware of her drinking more than her normal amount (1 - 2 glasses). She was able to anticipate going to my son's piano recital today and enjoy it despite her discomfort, and she was able to remember and talk about it afterward. She remembers about the family wedding coming up in Florida next month. We're still able to talk about things though her responses to things I say tend to take familiar paths.

She tells the same stories repeatedly, and I'm starting to notice gaps in the stories where details have fallen out. One story she likes to tell is about how much my father loved me. :-) She's told this anecdote many times, how she asked him if he minded that I was a girl instead of a boy, since most men in those days wanted sons. And he said, "A boy? Boys are no good! What would I want with a boy?" But recently she doesn't remember who asked him the question. "Somebody, I can't remember who it was, asked him if he minded getting a girl instead of a boy...."

A lot of the time I feel weighed down by a deep sadness about all of this.

Jean, thanks for the sympathy and understanding. Your mom's list is such a good picture of what that stage of dementia is like. :-(\r\n\r\nDenise, I took the OTCs upstairs and I've been doling out the Tylenol. I feel better about it, and she was accepting of it. She is keeping to her routine still of regular meds, so I haven't messed with that yet. It's hard to find the balance between taking over for her and preserving my time as long as possible.

Hi LM--I'm slow to comment (I hope this will make you feel less guilty) but wanted to check in and see how the past week went. Were you able to start taking on the responsibility for giving the meds?

\"I feel weighed down by a deep sadness about all of this\" -- says so much. It's such a hard path your going down. I realize in retrospect how much that weight also affected my functioning... ie. memory.\r\n\r\nI agree with Jan that it's never to early to take over the meds. Looking back and knowing what I know now, we waited way too long. MIL used to write lots of to-do lists. One morning I saw this: \r\n\r\nSunday:\r\nget up\r\ntake shower\r\ndo make-up\r\nfix hair\r\nget dressed\r\nchurch\r\n\r\nAt the time I thought that list was just ridiculous, but now I realize how much those pedestrian lists had to do with her dementia. She was trying to keep a grasp on her routines. \r\n\r\nI understand your fear of not remembering to give your mom her meds. P and I would constantly check on each other when caring for his mom-- ie. did you do her eyedrops, did you add her Ducolax to her protein shake, etc. I would get lost in my own work on my computer and lose track of time. One time I totally forgot that I had given her a laxative suppository; routine was to put her on commode one hour later. Five hours later, after dinner, I realized I totally forgot. After that I set timers and iPad reminders for when we had to do her medications.

Thanks so much Lillie and Jan. Jan, that sounds like the logical next step. But I truly worry about my own ability to remember to deliver pills on a regular basis! I don't take any prescriptions myself, and I figured out a long time ago that I was not a good candidate for BCPs because I could never get through an entire month without missing one or two pills. :-(

Your care of your mom is so attentive, that it's hard for me to imagine she could overdose. At the same time, being very pro-active as I am, I don't think it's ever too early to take over the medicine dispensing as long as she'll agree to it without feeling dependent. It may come to the time that she dispenses her own pills from the caddy (so you would see an empty slot when you checked) but she doesn't take them all, and they end up in a pocket, or on the floor, or in the glass of liquid she's taking with the pills. We are WAAYYY down the road passed this at our house, but if you can not make a big deal about it, just make it part of whatever routine you already have, and take all the possible medications in her living area into your space so she can't have any mistakes, and sell it to her as just one more thing you're doing to keep her safe and comfortable. Good luck, you are doing the right thing.