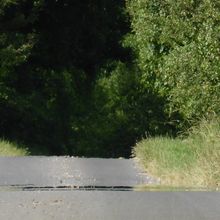 Sorry I've been MIA for a while but my life has been crazy! I added a new client to my caregiving business in June and just day-to-day life has kept me busy!

My friend Darcy who has bladder cancer started chemo in April. When they went in and operated they also found that she has a tumor in her lungs, and pelvis. She has a 27-year-old son who lives in Lawrence which is about two hours from Wichita and a 22-year-old daughter. She has been divorced for about 20 years. We were very good friends when her kids were little. About five years ago Darcy disappeared from my life and any attempts to get together were met with excuses about having other things to do. About a year ago she came back into my life and we were friends again. We got together a few times.

When she started to have troubles with her bladder cancer and the cancer diagnosis all of sudden they wanted me and all of my help. At first I was more than happy top help out. As time has gone on I have many many suggestions for them to contact Victory in the Valley (a very good support network for people who have cancer in Wichita). I went over and spent a few hours with Darcy a few weekends ago as Mattie was going to be out-of-town and wanted someone there to be with her mom. After that I heard nothing from them.

All of sudden out of the blue on Monday I got a call from Darcy's boss and good friend wanting me to organize things as things were really bad and Mattie could not handle this. Carl is coming home every weekend. I told Darcy's boss that I had not heard from them in several weeks. She wanted me to drop everything and  go over there right then and there. We are on vacation right in Colorado and I couldn't just drop everything and go over there and take charge. I told Darcy's boss that I would call Mattie and check in. I did that and Mattie said everything was going pretty good. I called Darcy's boss to report this and she basically told me that Mattie was lying to me and I had to get involved! I really think Mattie has it control the best she can. At this point I'm going to try to stay out of this but still remain a friend and be supportive.

At the same time this was going on I developed Iristis in my left eye the middle of May this is the same eye that I had a blood vessel burst eight years ago. I had intense pain in my left eye brow and me eye was bright red. Thankfully with eye drops and my awesome eye drop it has gone away and I still have  pretty good vision. Then Mark's father refused to go out with us for Easter and Mother's Day as there would be too much noise, people, and he couldn't eat the food. On Maundy Thursday in front of my AH at church he asked the assistant pastor out to lunch at Golden Corrall. The last thing was we went over for mother-in-law's birthday and their was plaster falling from the ceiling. I pointed this out to AH and he said it had been like that for some time. I was SOOO ready for our vacation!

That's it for now!

Wow, you sure have alot going on. Glad to hear your eye improved so you can keep on top of all of it.

Oh, Maria! You've had a lot of tugs--everyone wants a piece of you. \r\n\r\nI'm so sorry about all that's happened with your friend. It sounds like there's quite a lot of dysfunction there. You are wise to understand how much you can do while remaining a supportive friend.\r\n\r\nI hope you and Hubby are able to enjoy the day today. \r\n\r\nGood to see you. (And, you thank you so much for your help welcoming one of our new members.) :)