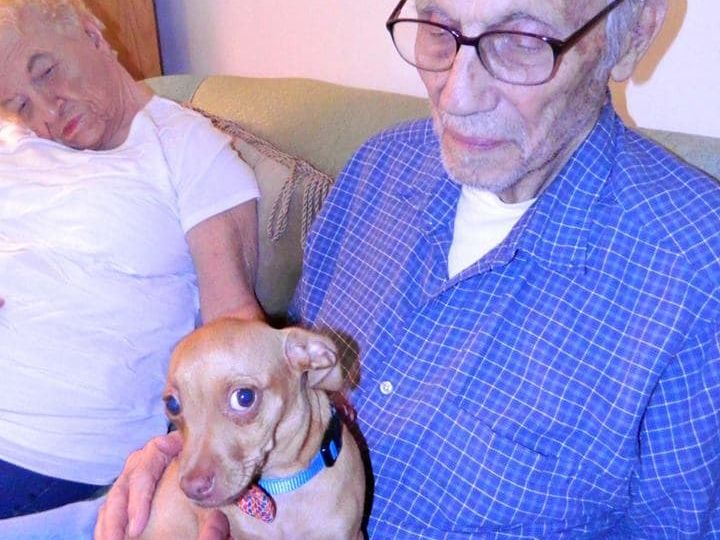 Goldie
According to the doctor, Dad's cognitive scores went down dramatically between last November and February. I wasn't surprised. He asks me over and over if we've put the cookies in the grocery basket. He doesn't remember why he's going to the doctor. He can hear better since the wax was cleaned out of his ears, but in a group, he cannot follow conversations. He will sit quietly until he has something to say and then just burst out with it, regardless of who he may be interrupting. I can't get angry or even impatient with him. He's so good-natured about it. If I correct him when he gets confused, he laughs and says "oops!" Also, he had an unbelievable amount of patience with Mom when she was going through her psychotic episodes. He just kept saying how much he loved her and wanted to take care of her, even when she was really awful to him.

Now, Mom is responding to Dad's challenges by becoming very impatient with him. She often tells me that she needs a vacation from dad. She wants me to take her places, anywhere to get out of the apartment. When my brother suggested they take the couch out (2 reasons: she's discovered it's more stylish than comfortable and it's stained) and replace it with a recliner just for her. That's fine with her, but she doesn't want the two recliners side by side. She wants some distance between her and dad. When I come to pick up Dad, she's still in the dining room with her lady friends. When we come back, she leaves the apartment again.  She really grumbled when we returned to the apartments, saying sarcastically, "oh goodie, we're back here".

It's really hard to not feel angry with her. In my opinion, she's never treated Dad well. She's always been very critical of him and she has never, ever acknowledged his needs. Even when Dad's truck died completely and even though Mom hadn't driven in two years, she was really upset that Dad was driving her car; the car he bought for her. She holds on to things and she holds on to the image she has of herself as the attractive young woman who has men falling all over themselves to be with her. This is the image which the benzo addiction allows her to keep. Take her off the benzos and she becomes more aware of who she really is, and she can't deal with that. She's on a minimal dose now. What exactly that means for her emotionally, I don't know. It's just more mom weirdness, being 87 going on 15.

I'm trying to find the neutral space, the space that allows me to see her, not as my mom, but as a struggling human being. Dad is declining. He's almost 93 and he won't be with us a lot longer. The remainder of his life will most likely be measured in months, not years. She's dependent on him and, though she won't admit it. She's scared. Dad's decline is reminding her that she is getting old, too. She's suddenly wearing more make-up and trying to act like she's too young to be in assisted living.

Today we took load after load of their old things to the thrift shop. Though I said I wasn't going to feel guilty, I did. I felt it all weekend. Even though the experience with Mom's car has taught me how crazy it is to hold on to things we aren't using, especially when someone else could use them, it was really hard for me to do this. Now the bulk of it is done, I feel so much lighter! No more guilt (at least for now). I let go of Mom's hold on me to hold on to her stuff.

Now, if only I could feel lighter about the coming months.