0
John Belushi nailed it in the 70's, when his skits on Saturday Night Live "Weekend Update" placed the phrase "but NOOOOOOOOO!" into the everyday lexicon. I swear he foresaw visions of my mother, and I would bet a free pass to the adult day care that caregivers with a dementia caree would agree. And it is a mere head-jiggle to include a morph of Murphy's "if anything can go wrong, it will".

The latest scientific evidence indicates dementia carees have no capacity for intention and do not stay up all night plotting ways to confound your plans. I beg to differ. If it is a day I have commitments, a day I would prefer that she sleeps, she will get up at 7:30 and spread the wealth of her swilly underpants on the carpet so I must cease my personal toilette and give her a bath. If it is a day I would prefer that she rises, she sleeps so deeply that I have to drag her out of bed in order to serve breakfast for lunch.

One particular day I had planned to leave her at the day care, a mere block from meeting a psychologist who was going to prevent me from doing something geriatrically illegal. It was a brilliant no-fail scheme and appeared entirely plausible to accomplish by 11 am. I started the "wakey-wakey process" around 9. Florida sunlight streamed in between the blinds. First I pulled off the blankets, then Mom's slippers and socks. Next off came the Depends she was wearing on the outside of her clothes. Then I removed most of her clothes and her hair net, talking all the while in a rhapsodic, chipper voice. She was almost naked when I resorted to tweezing her chin hairs, and the only response I could elicit was a gravelly, "SHUT THE DOOR". She wasn't going anywhere that day. Why should she? She could have cooperated. But NOOOOOOOOO! I had plans.

I purchased magically absorbent quilted bed pads to control the incontinence issue. Much like The Princess and the Pea, I have piled layer upon layer of quilted pads and sheets in the hopes that at least one layer will work and prevent a complete meltdown of her bed every day. Her bed, fresh and crisp, awaits. Lift sheet, get in bed, body fluid control system engaged. But NOOOOOOOOO! My mother gets on top of the bed and uses the quilted pad as a blanket, her spindly legs poking out from underneath. Or she pulls the pad up under her head so she wees on the bed anyway. She gets up in the middle of the night, undresses, takes off her Depends, stuffs them in the toilet or underwear drawer, gets re-dressed, and goes back to bed. Such a simple thing to stay nocturnally dressed and protected but NOOOOOOOOO!

My sister bought her an amazing bath chair. With this reliable addition to the household I can bathe my mother with great peace of mind. She could sit on it. But NOOOOOOOOO! That would be just so easy. It makes more sense to my mother to wipe it down with a washcloth, or use it to hang up bath linens, or careen and wobble in front of it, but never, never never will she SIT on it.

I work diligently to provide her diet with fresh fruit, yogurt, fibrous cereals, lean protein, juices, crunchy salads, meats geometrically cut to prevent choking. the occasional cookie. She could eat these offerings, and so maintain her strength. But NOOOOOOOOO! After a few mouthfuls she is shuttling, forkful by forkful, unwanted mashed potatoes into the garbage pail. Then I find her squatted down in front of the refrigerator, digging around in the crisper drawer for a dessicated pecan half. Of course getting up is not so easy as going down, and she loses her balance, tottering back to smack her head on the pantry door and her bum on the vinyl floor.

So many perverse examples, so little time! I hope Mr. Belushi and Mr. Murphy are having the grandest chuckle at our expense together, wherever they are. 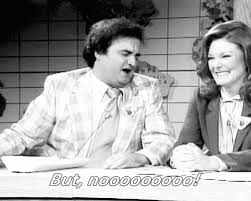