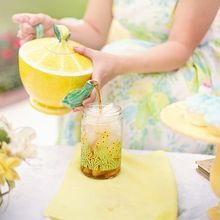 Someone had asked me to share something about my mother-in-law, Beverly.

When I met her, Beverly was so happy and so much fun to be around. I also met her mother, Dee Dee, who was also so much fun to be around. These women were so sweet. One day as I entered into Beverly’s home, she was sitting with her mother and they were having sardines and crackers with lime sprinkled on it. I asked what they were eating and they told me. They asked me if I had ever had any. I said, No. They said that I probably wouldn’t like it then. They asked me if I wanted to try some. I said, Sure. It was my first real tea party. I liked what we ate and enjoyed their company. We did that.

Every once in a while, it would be a snack or a light lunch for me. We grew close and I called Dee Dee, Granny Dee Dee. I called Beverly, Mom. Beverly is my husband’s step-mom. She loved to play her music as she dusted her living room. She was a good cook also. She made a pasta dish with garbanzo beans and fresh fried garlic in it. It was so good. I can never remember the name of it or say it. I would just say, I Love your pasta dish.

We played Scrabble a couple times and she was really good at it. She had a live pet frog in her kitchen which lived in her kitchen a very long time until someone stepped on it. It died. She always helped people when they needed help with things. She let us stay in the little house behind her house in Florida when we became homeless and had no where to go. There was no electric and no hot water because it was used for storage, but Denny fixed it up so we had electric and running water, even if it was cold. We had no heat, we had lots of blankets when it was cold. We eventually had a little heater which we used a little until we were warm.

Beverly was a woman that Denny’s dad loved so much. We all loved her so much. These last six months or so Denny and I grew so close to Mom (Beverly) because we helped take care of her. We found out she had lung cancer. She went for radiation treatments for five weeks, then after a while her health declined. She eventually ended up bedridden since Christmas and we really loved helping with her taking care of her.

On the 25th of March she slept all that day and in the evening she had trouble breathing, so we put a mask of oxygen on her and watched her breathing levels which jumped back and forth. She was also in pain. She sobbed. We gave her pain medicine and called the nurse to come see her. The male nurse whom was on duty came and checked her out; he told us to give her pain medicine every half hour as long as she is in pain. We did. We knew that it was either going to be that night or the next day when she would pass. I stayed awake with her all that night.

One of the signs we saw and knew when it was time is when she told me that she wasn’t going to worry about him any more, pointing at Dad, her husband. She was talking about Dad. The next morning when Denny got up around 9 a.m., I went to bed and told Denny that the last time she had any pain medicine was at 5:30 a.m. and to watch her. He was watching her and she stopped breathing about 10:00 a.m. and so he came and got me. Sure enough she had finally gone home to Heaven. Denny asked, why did she do this on my shift? We told him it wasn’t his fault, it was time. He was the one God and Mom trusted to be with her is why it happened when he was there.

He cried when he helped carry her body out to the hearse. When I told my mom how Denny asked about it, she explained what someone finally explained to him. God knew that I had two losses in my family losing my sister, and my mad and He knew that I wouldn’t be able to handle it. He chose Denny to be there because Denny was so loving, gentle, and kind with helping with her. He knew Denny was strong and could be there for Mom.

The funeral was beautiful. Mom looked beautiful. I don’t however understand why there has to be discord such as unforgiveness and hatred there with some family members. Material things seemed to be the only things on their minds. It is just too sad.

Beverly Joan Dyer Shaffer was the most wonderful woman I have ever known and I had such an honor to take care of. I loved her so very much. I will miss her. She died on March 26th,2015.

Thank you for sharing that very beautifully written memory. How wonderful that you had such life-giving women in your life, and you were wise enough to see and understand that. I hope you continue to remember the little things that bring joy and comfort.

What a great tribute to your mother-in-law! I can tell that you really loved her &amp; cared for her.\r\nMaria

Thank you for sharing precious memories of your MIL. What a touching scene as your husband spent his last moments with his mom. May your family continue to share the memories through these days of grieving.