0
The speakers and panelists at the Second Annual National Caregiving Conference were informed and engaging. The attendees were enthusiastic and appreciative. The food was tasty. Chicago Marriott O'Hare Hotel was sleek, modern, beautiful and drafty.

I enjoyed Teepa Snow’s talk in which she explained and role played, using the humor she is known for, how to redirect a caree who is prone to inappropriate touching.

Chatting with Teepa after her talk she  stated that people in all areas of the world get Alzheimer’s. I asked about India.  Teepa replied, “They get it too. Not as much as we do but they do get it and they  hide their people when they get it “

Teepa took another minute to take a selfie with me and she was off to catch her plane to her next speaking engagement. 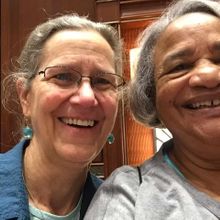