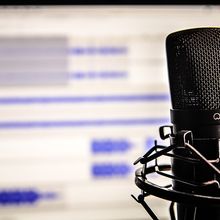 I have a lot of hobbies and interests in my life. The one thing that I do and have the most passion about more than any other thing is radio announcing, specifically, sports announcing.

When I was a kid, my mom told me that I started reading the sports section of a newspaper when I was five years old. I started getting into sports like baseball, football and basketball.

One day, I was watching the Illinois High School Association State Basketball Finals on TV and it dawned on me that I could watch sporting events and get paid to do it. i thought that was the coolest thing in the world. i knew that I found my life's calling.

Some kids wanted to be fireman or policemen. I wanted to be a sports announcer. i was going to be the next broadcast star.

As a kid, I remember being in my room and creating my own fictional radio station. I called it WLO Ottawa. I used music cassettes that I had to play music and I also wrote my own promos and commercials that I recorded after I announced a song or two that I just played. I wish i still had those tapes.

After I graduated from high school, I went to Lincoln College in Lincoln, Ill. It was a two-year college that had dorms and it also had a radio broadcasting program. It also had a student run radio station, WLNX. The mascot for Lincoln College was the Lynk so the stations call letters reflected that.

I loved working at WLNX. We could get away with saying just about anything outside of what would get our license pulled from the FCC.

I had my own show on the weekend and played Hair Metal from the 1980's which made sense since i went there in the 1980's.

I also got to do play-by-play for a few of the Lynx men's basketball games and i also did a wrestling match. (Don't ask.)

The one problem that I had was going to class. If I could just do my radio, I would be okay but the school insisted that I take other classes and they kind of frowned on not going to class.

So after my first year in Lincoln, the school administration thought that I might not be a good idea for me to return to the campus.

I then transferred to College (now University) of St. Francis in Joliet, Ill. Again, I loved working at the college station that was there but again I didn't like going to class. I lasted a semester there.

Eventually, I ended up getting hired at WCMY/WRKX Radio in my hometown of Ottawa, Illinois. I started doing sports in the morning and engineered high school sporting events and then started to do play-by-play for the sporting events.

WCMY showed a lot of faith in me as I did three separate tours there. I would work there for a couple of years and find a full time job and then something would happen and they would hire me back.

I even left for a job at a rival station in the same town. When that didn't work out, they still hired me back.

My last tour there started in 2002. Ottawa has two high schools in the city--Ottawa Township High School and the Catholic high school where I went, Marquette.

I was hired to be the lead play-by-play person for the Marquette Crusaders. That was pretty cool since I was a graduate there. There was an opening for my old job doing sports in the morning as well. I knew it was the best fit for me.

I stayed at WCMY until March of 2006. I was offered a full-time job as the Director of Media and Public Relations for the Rock River Raptors indoor football team.

Long story short, I lasted until after the regular season ended when the new owner decided that instead of four full-timers in the office, they only needed two.I was let go. The team has since gone out of business.

I needed a job and I needed one fast. I took my wife's advice and applied at the Menard's Distribution Center and i was hired as a Team Member.

I have been with Menard's for eight years. While I appreciate them giving me a job when I really did need one, I can tell that I am burnt out. I have no more passion for wanting to drive a forklift.

I have realized in the last year that I miss being a radio announcer. With the encouragement from my wife, I have signed up for classes at the Illinois Center for Broadcasting in Lombard, Ill.

I start classes on April 21st and I only have to go three days a week. I am going to learn Radio, TV and Online Media.

I am very excited about this project and looking forward to seeing what this new/old career will bring me.

My Name is Jamie Newell. I AM a Radio Announcer.

Thanks everyone. I just completed my first online class with a 100%\r\n\r\nCan't wait to get into the classroom on the 21st

This is awesome, Jamie!!\r\n\r\nI just love how you ended your blog. Perfect!!

Oh Jamie what absolutely fabulous news! I wish the best for you as you follow your passion. Your awesome wife sounds like your biggest fan so we will all become your groupies!

YEA! This is awesome. Proud of you!\r\nMaria

How exciting! That is great, Jamie. I would love to join you for the online media courses!. And how great that your wife is encouraging you to follow your passion.