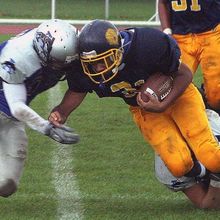 Well, the Big Game is over, with many disappointed fans. I don't follow football, or any major sport, so forgive me for not understanding all the ins and outs. I'm just getting the impression that some were "bored" with this year's game. Am I correct?

I'm not sure how to take this news. Was there not enough sports violence going on to make it interesting enough to watch? Were not enough heads getting bashed... Opps, you may have guessed where this is going.

Up on my soapbox I go. I've lived fourteen years now with a brain-injured man. It ain't a pretty future for anyone. For years now they have identified a new form of dementia, tied specifically to former football players. It's called chronic traumatic encephalopathy.

But the NFL, and I assume other leagues, have been in denial about it. Establishing their own biased doctors on committees to study the problem, it resembles the tobacco industry's first lackadaisical attitude about smoking risks.

You can read more about it in a book called "The League of Denial" by Mark and Steve Fainaru-Wada, or try to catch it on a PBS program of the same name (see link below).

It's vital information, especially for parents of kids who want to play contact sports. Is it really worth the repeated concussions? They have found that youth are even more susceptible to even the mildest forms of brain injury. Some states thankfully have provided laws now that require a minor to be taken out of a game after a hit to the head, until it has been assessed and cleared by a trained professional. Make sure your school or team is fully aware and are taking stringent precautions.

My question is how this is going to change the game of football for the future. They may be required to make the game safer, and I'm guessing it won't be as much fun to watch. Rather like the Super Bowl game last night.

Well, I say--great, bring it on...maybe with less violence, there will be fewer fans watching, and the game will lose its grip on our culture a bit.

Just to tie this highly charged (because that's how I'm feeling about now) article into the topic of caregiving, let me give you a few glimpses into our life, to let others know what you may be looking at:

We wake up in the morning (only if the night before I remember to set the alarm, after I've let the dog out, brought the portable phone to the bedroom, make sure we've BOTH taken our pills, covered the bird cage, checked to see if the doors are locked, and the trash is out on the curb, if it happens to be Monday night).

If Dean is awake when I am in the morning, I put his socks on, make sure his clothes are laid out (clean ones, by the way--otherwise, he'd wear the same clothes, well, probably forever), fix us some breakfast and hope he isn't hungry ten minutes later, knowing there is no hope for that one. Then I bring him his pills to take, check afterwards to make sure all the pills fell out of the organizer. He's been known to miss one.

After that, I do laundry, dishes, empty trash cans, make doctor's appointments, prepare for his bath aide to come (if it's the day for his shower), pay bills, babysit for granddaughter, bring loved ones to and from work. Well, the list goes on and on...because I am filling two people's shoes for work around here. Who has time for a "real job"?

And if that isn't enough, Dean has an anger fuse that's about as big as my little fingernail. He reasons and behaves like a three-year-old (believe me, I've seen enough similarities with our grandchildren). He is half deaf, so loud is the normal volume for our family, but still requiring me to repeat myself numerous times throughout the day. And to top it off, Dean has taken up singing. I would love him to put it down again. Fifteen thousand refrains of "Rock-a-bye, Baby" every day can rock your world!!!

On the plus side, he gives me lots of hugs and kisses. It's like a honeymoon, but without the s**. Yeah, try to picture it, if you can.