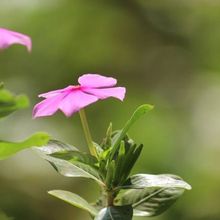 (Editor's Note: Today, we welcome a new blogger, Joshua. You can connect with him on his profile: @jb01.)

My story begins in the fall of 2009. Samantha, my first wife (of 9 years, at age 30) started to develop a cold. We were planning to go to an out-of-town concert in late October, and she did not want to miss it!  Her cold got a little worse at first, then progressively much worse over the course of a couple of weeks. She refused to go to the doctor because she had her heart set on going to this concert, and she wasn't going to let a doctor order her not to. Over the next couple of nights, she spent hours coughing up both of her lungs.

The concert was on Friday. On Wednesday evening, after I got home from work, I saw that she was in terrible shape, and now she was coughing blood. I insisted that she go to the doctor, and she finally agreed to it. Once we got into the office, the nurse took her back right away - there was no waiting. Five minutes later they came back out. The nurse told me, "Take her to the ER right now. Do not wait. I've called them to let them know you'll be there, and they will see her as soon as you both walk in." As it turns out, her SpO2 level (blood oxygen saturation) was so low that three of their SpO2 sensors - those things they clip on your finger - did not register anything. The low limit on those sensors is approximately 68%, or so I've been told; if your SpO2 level falls below 80%, you are on your way to the ICU. And we were indeed on our way to the ICU!

Approximately 85 days and three hospitals later, my wife's hospital stay was coming to an end at the long-term acute care (LTAC) hospital. She was "well enough" to no longer qualify for LTAC. But there was a problem: she had been on a ventilator since she was admitted in Fall of 2009. Under normal circumstances, pneumonia victims are able to wean off of the ventilator in a matter of weeks. Due to a rare aspect of my wife's physiology, this was not possible for her. There were two options: send her to a nursing home, or take her home, with the understanding that I'd take care of her and we'd have some friends to step in when I needed a rest. We got some friends to agree to this, but her family was dead set against it. Her mother called all of our friends and threatened to sue them if anything happened. But the only nursing home that could support a ventitlator patient was two hours away from home and my workplace! So Sam and I went against her family's wishes and I brought her home.

The first night home was the second worst day of my life. The LTAC had me doing basically everything towards the end of her stay there so that they could make sure I was able to care for her. But there were doctors, nurses, and respiratory technicians at the LTAC 24/7 - when something went wrong, it was easy to call for help. We didn't have this convenience at home. So when she woke me up at 3:30 am pleading for help because she couldn't breathe, it was the most terrifying thing I've ever experienced. She was hooked up to a ventilator, it was running, the settings were correct, but she couldn't breathe! How am I supposed to fix that? What can I do that would have her breathing better than the ventilator did? Should I bag her? I completely lost it and did something that I regret to this day - I wasn't physically violent but my actions were, shall I say, very unkind. Luckily, she was able to breathe again shortly after I adjusted her breathing tube.

In the following weeks and months, we finely honed my caregiving routine. I was in charge of administering a myriad of medications whenever I was home. I also had to maintain the equipment, keep track of doctor's appointments, and spend 90 minutes each day cleaning out her tracheoscopy tube. This was wearing on me... but it had to be done, there just wasn't any other option. There wasn't anyone else who was willing to do this, and she did not have enough energy to help.

Our intent was to continue the ventilator weaning protocol at home so that eventually, she could be off of it altogether. Unfortunately, this outcome was not in the cards for us. One fateful Sunday evening in late June of 2010, I could not wake Sam up from her sleep. She was breathing, but very lightly. She was otherwise completely unresponsive. So I called 911 and the squad took her to the hospital. By the time I got there behind the squad, she was awake and alert. Over the course of a few hours she had tests, x-rays, and labs done - but nothing out of the ordinary for her. During this particular hospital stay, she was in a lot of pain, so the doctor ordered morphine - and she went to "sleep". She was released and I took her home, carried her into the house, and put her in her bed.

The next morning, she was again unresponsive. Unfortunately, this time the unresponsive condition was permanent. At that time, she was 30 and I was 34.

A big part of what I struggled with in my grief process was the fact that I was overjoyed that a burden had been lifted from my shoulders. Indeed, when I returned to our house a week after Sam's passing, I had no idea what to do with myself. I told my employer I would be back "at some point" and they were good with that. I didn't have any further caregiving responsibilities, or any real responsibilities for that matter. I was thankful for this lack of duty, however, because I was able to use the time to start recovering from this grave injury to my soul.

A year or so later when I started dating again, I made a rule for myself that I would only become involved with someone who is 100% healthy - someone I can go jogging or bike riding with, someone who is my equal. Interestingly enough, this wasn't in the cards for me - sometimes, when you meet the person that you are going to spend the rest of your life with, lightning strikes and any rules you have for yourself just don't matter any longer. So in my next blog post, I'll share a bit about my current wife, Heather.