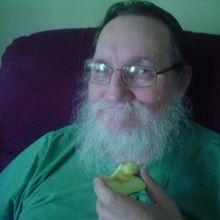 After noticing incremental changes with Dean's condition for the last few weeks, we finally ended up in ER yesterday. I drove him there myself, and wondered what could be going on with him. There were just little things I've noticed lately: increased irritability, a little less appetite, and him just reporting that he didn't feel good. (Our home health nurse, who Dean calls "Katy-did", agreed with going to ER with him.)

I suspected pneumonia because he has had more problems keeping his O2 sats up, not always using his C-pap and oxygen when he needs it. Plus there's been some coughing and a touch of wheezing. But the chest X-ray showed the lungs were okay.

The problem was his blood sugars. I was starting to suspect that too because of his increased thirst and lethargy, beginning two days earlier. I think we were all floored when they came back 810!!! This is a totally new diagnosis. And I am shaking in my boots for what it's going to mean for my caregiving.

I've been stressed out to the max with his oxygen issues this past year, keeping him using his CPAP, etc. And now it looks like at the very least, we'll be on a restricted diet (I say "we" because I'll have to be on it with him), plus pricks and insulin shots.

He's pretty compliant in the hospital right now (dementia is never easy), but don't know how he'll behave when he gets home with it all. He's already talking to me on the side about walking out of the hospital when he feels HE'S ready.

Don't know how we'll get through this, but I know we will. Appreciate your prayers, and will reciprocate. I know others here are going through similar or worse. Just comes with our job description...

The thought that uplifts me is he has survived so much. He walked into that hospital on his own, with blood sugars that high. He's my "superman". I think he's made of iron. (P.S. His traumatic brain injury was the result of a tractor running over him 17 years ago!) God must want him here with us for a reason.

Note: This is a picture of Dean (age 70) eating an apple with his three surviving teeth. They must be make of iron too!

I love the photo! With his beard, he looks a bit like my husband. \r\nAt least you know what's up now, but I know it isn't easy. Adding my prayers, too.

I prayed for you for strength! We'll lean on Him even when our strength / energy is low.

Oh, Teresa, I am so sorry. \r\n\r\nI'm definitely keeping you in my prayers. It is intimidating to think of adding one more thing to the care regime! And, it's not a little thing -- it's a big thing!\r\n\r\nThank you so much for keeping us posted. Please let us know how you're doing when you can.