CatKBorn
Today we went to the neurologist. I really like this doctor. That said, I liked the previous one but in comparison this one actually appears to have experience with Mom's condition.

We looked at the MRI results from the scan we had just had done. Oh. My. God. The degeneration in the last 3 years - almost 4 - since the first MRI is staggering. Frightening. It is as though the left frontal lobe has nearly vanished. The spacing between the lobes is much larger. You have to wonder when you look at this how in the world she can function at all.

The diagnosis is confirmed: PPA that has evolved into corticobasal syndrome  (degeneration) - another rare form of FTD. Medication adjustment today - increase the dose on the Zoloft, add Sinemet (helps with the tremors) and in a few weeks after we get that stabilized then add Namenda. Dr. T has 50+ patients also with corticobasal and 2/3 respond well to it so worth a shot we figure. I now though have to get a pill keeper that has slot for different times of day not just once per day. Sigh.

No accident in bed last night which is good because this morning she did not have the Walgreens version of Depends pulled up all the way so leaking would have occurred had there been an accident. Also good that there was no argument over today's shower. Actually we were pretty compliant last night and today. Maybe if I can stay matter of fact about things we can continue to be compliant. Yeah, I don't really believe that either.

In the "Grrrr" Department, last night I posted on Facebook a simple sentence: "We've reached the phase where I have to buy Depends". Keep in mind that this is NOT a public post on a public page - family and close friends only. So after I make the post, my cousin - who is a nurse working in an assisted living facility about 3 hours from here - starts bitching at me for putting this info out there because she feels it is inappropriate and too much information. I growled back some but the gratifying thing was the way my friends - some of whom who are also caregivers - jumped in and told her that I shouldn't have to filter what I have to say, that they understand how isolating this situation is and that MAYBE it would be nice if I had some help.

This cousin and I were close as kids. Even though we lived hundreds of miles apart, we wrote to each other weekly. Then she went and married a guy and cut herself off from family which was very painful for her mother, me and her younger brother. She said last night to a friend of mine that she didn't like to see her aunt talked about "like that".

Like freaking what? Like someone who is aging and suffering? Like someone whose daughter is doing the best she freaking can with NO support? So if we don't talk about this rare condition it won't exist? This from a nurse. This from someone who works in a facility with people with dementia, just like my Mom. This from a person whose own mother is struggling to care for this woman's father who is all but incapacitated. Someone who should be supportive and understanding. But no. She doesn't want to hear it about her aunt. She wants to think things are peachy. She's the closest family I have around here and instead of helping 9 times out of 10 her words are hurtful.

The bright spot in the last 24 hours - After 7 months Mom's cat ventured out last night into the kitchen while I was making dinner and explored my room (chicken apparently smelled good). This is HUGE. Tonight Miss Callie Kitty not only came into the kitchen, but she also explored the dining room and joined the others at 10 for treat time. A few more days and she will be out and about as a regular member of the kitty clan. I can not begin to explain what a major load off of my mind this is.

I met a friend for a glass of wine tonight before I went to pick up the new meds (thank God for Medicare by the way) and that was nice. I stayed longer then I told Mom I would but she was pretty all right with it and actually stayed up until a little after 10:00 - so that was good. I needed the break very badly. Family may not come through but thank you God for friends. 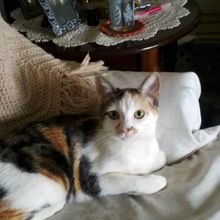 Glad to hear about even the littlest victories. They are important! So sorry to hear about your cousin and her lack of understanding.

Glad you found a doctor that knows FTD, it makes all the difference in the world.