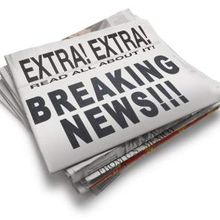 Fame isn't all it's cracked up to be. My husband and I just got our pictures in the local newspaper under an article I wrote about caregiving. I was feeling a bit of fame when a few church members said they saw it this weekend and how good it was.

Not subscribing to the paper ourselves, I had to go to the grocery store to get my own copy and see what a couple (notice I said just a couple) of people were gushing about at church. (I wasn't sure what picture they used and what it would all look like in print.)

I picked up four copies of the paper, even though they were a dollar each, causing the check-out clerk to look skeptical. I told her it was because I'd written an article in them. She then gave me a totally neutral look, which read to me as a "so what?" look.

On the way out the store, the papers almost blew away from where I had them in the cart, causing my neatly pressed copies to have a "you-forgot-to-take-me-out-of-the-dryer" look. There went my pristine, scrapbook-quality article copies.

At home, I thought surely my husband would be a big fan of the article as I saw him bent over it studiously at the dining room table. But upon closer examination, I noticed the pencil in his hand. He was working on the word search puzzle on the opposite page of our notorious picture and article. Guess I had read it to him too many times prior to publication.

I did end up calling my sister in Florida, because I knew she'd at least feign some excitement with me, which she promptly did. Let's hope she went and read her email with the link to my claim to fame later though. She's not a big computer fan.

After all this, I have once again come to the conclusion that caregivers are just human. Not the angelic beings we're portrayed as. We can get too much pride for our britches and we can even get angry, oh my, as I pointed out in the article about caregiver anger. Here it is, if anyone's inclined to read it. (No pressure, I promise I won't be angry if you don't read it. It's not very long; I had to abbreviate it almost by half for them to publish it! another grrrr)

That must feel great to see your thoughts in print. You deserve it, not to mention the situations you have experienced, which give it authority. Great job.

I really liked your article! This article can really be helpful for other caregivers too! You are awesome!

This is awesome!!! I love the photo!! Kudos to you--what a fantastic accomplishment. (I've got a tweet going out about it and will share on our Facebook fan page, too.)\r\n\r\nWill you be able to contribute regularly? You'd be a huge asset to the paper. :)