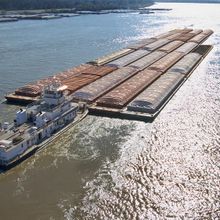 During Dad's 40-year career as a tow boat captain, his daily routine involved getting up at 4 a.m. every day. And, he was usually in bed by 6 or 7 p.m. I suppose after that many years old habits die hard as this has continued to be his daily routine for the past 20+ years of his retirement. Prior to moving him into the assisted living facility last month, I made sure their kitchen staff knew he would be up early each morning, demanding coffee. He has since proved to them that I was not kidding!

Tonight around 8 p.m., I receive a call from Dad on my cell phone. That's strange, he should have been in bed over an hour ago. This past week he's had a pretty heavy bout of dementia, so I cautiously answer the phone, unsure of what I may experience. "Hey, what are you doing?" he bellows with a cheerful, but somewhat groggy voice. He goes on to explain that he has night watch duty tonight, so thought he'd give me a call to pass the time. OK, we'll jump on this fantasy and see where it takes us. I visit with him for a few minutes, trying to intentionally embrace this fascinating and bizarre new phase of my life.

When this latest round of dementia showed up last weekend, Dad transported back in time about 50 years and became a tow boat captain again. He is convinced his apartment is his captain's quarters on a tow boat, and he marvels at how quiet the engines are (normally there is a very noticeable hum and vibration due to the massive engines). The boats would "run" (move) primarily during the day, and on clear nights they would sometimes travel the river as needed to stay on schedule or make up lost time. But on stormy or cloudy nights, they would "tie up" (dock) somewhere for the night, and on those nights, someone would need to sit up all night to make sure no unexpected visitors came onto the boat, no barges came loose, or who-knows-what-other issues might occur. I guess Dad must have been watching the local weather tonight, as we are expecting storms overnight. So a good Captain would certainly choose to tie up, and then plan to stay up and keep an eye on things. And Dad took pride in being a good Captain.

It's 10:00 now and I just called the night nurse to see how he's doing. He's sound asleep in the recliner in his room, but I'm confident he's keeping a close eye on things in his dreams.

I just love that when your dad needs good company, he calls you. :)\n\nDid your dad work on the Illinois River?

Thank you for sharing this insight into the life of The Good Captain. You are doing great in allowing The Captain to continue his work with peace. Your ability to journey with him in wonder and ap[appreciation, not anxiety, is a big part of it.

TBD, you have brought tears to my eyes this morning. My dad was the engineer in charge of safety at a large photo products plant. He had many duties, including taking care of the pool the effluent was filtered through, the safety of the facility and OSHA requirements. When his dementia had fully taken hold we moved him to a nursing home near me. The staff liked to keep him near the nursing desk during the day. He would often look up and remind me to tell them about the hoses and structures on the ceiling that were dangerous. They might fall and injure someone. He would look out the window and comment on the locomotives that were in the train yard. (The large air conditioning units for the facility) Funny how their mind goes to the past, familiar places where they were in charge. I miss him.

Beautiful! What a wonderful life your dad has had! It's so nice you and the staff can recognize and allow him to have his vocation even now. Who knows? Maybe there's some tow boat out on the river benefiting from his care and thoughtful energy.