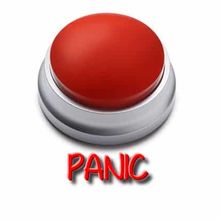 It's so easy to hear the panic in Mom's voice. And no, it's nothing new, she just wants her stuff that is still in my studio. I've hardened myself to her pleas to the point she has stopped asking me to bring her over so she can look through "all her stuff". Once in awhile, she'll tell me how she's going to ask someone to bring her to my house so she can get her clothes and knickknacks and the other glider rocking chair and, and, and. I ignore it and change the subject. When my sister is in town, mom goes on a rant about me and complains about not having her things. My sister works at a nursing home in another state. She gets it. She ignores mom. Brother-in-charge-of-finances flies in for a couple of days and, sometimes, takes them shopping. That's how he deals with the stuff issues. He just buys them more stuff.

My youngest brother is a different story. He's a heart guy, the warmest, gentlest, kindest soul around. He can't stand it when Mom gets upset about her stuff. Youngest brother wrote me before he came for Christmas saying HE would take Mom to my studio so she could see that her things were still there and safe. Uh huh. I decided not to tell him one more time that this would not make Mom happy, it would make her want to take it all back with her. She would also see how little is left. Would he like to stay here and deal with her outrage because we couldn't keep the 50 years of hoarded stuff they had in the house? I have said it many times. I'm tired of it. His response is always the same.

"But if she could just see it's there and safe."

Fortunately, the snow gods heard my plea and delivered some snow and cold weather for Christmas and they didn't even mention the possibility of going out to the studio. In addition, the tree stumps I use as steps are rotting out. I wouldn't take Mom out there for anything. Not safe, I told him. He left to go home to Kansas the day after Christmas. I got the following text from him later in the day: "if you get a chance, can you pick up Mom and bring her over to look at her stuff? I know it’s a long shot. She really needs to be reassured that her stuff is okay. It would seriously rock her world. Hopefully in a good way. Don’t respond to this, just do it if you can."

I give up. I didn't respond. He obviously doesn't want to hear what I would say. I'll just ignore and change the subject. I know, I know. He just wants to make her happy.  I'm just exhausted.

Two days ago, we had another Not A Crisis moment. Mom called. Something was wrong with her computer and she needed me to come and fix it. I waited till the next day. She kept complaining about "that book" on the computer and "someone must have done something. Did you?" She asked me. Uh, no. It took me a long time to figure out exactly what she was talking about. My mother, who can't figure out how to turn on the computer (which I fully understand), but can't not keep up with every current fad, is on Facebook. Youngest brother had taken a photo of her and put it on as her profile picture. She didn't like it and wanted it changed. THAT was her crisis problem. "It's ugly", she said. "But... it looks just like you", I said.

Oh my. That didn't go well. Not nice daughter. We'll skip over that bit.

This led to a third Not A Crisis moment. On my way out, Mom just had to get one more thing in: "We've got to make an appointment for Dad to go to the dentist. He's been complaining about his teeth." Most of you have heard the saga of Dad's teeth and the huge amount of Fixadent he uses to hold them in. The Fixadent builds up and up because he doesn't clean it out, and eventually, he looks like a not at all politically correct old Chinese movie character. I asked Dad if he was having problems with his teeth. "No. They're fine." "But they look awful," says Mom, "AND, we still haven't found his hearing aid. It's horrible." Oddly enough, when he loses a hearing aid, it is always for the ear closest to Mom.

For the new year, I resolve to remember:

I cannot change my brother. He will always want to please Mom and Dad, mostly Mom because she demands it. I'll never convince him that it's better for her in the long run if we just distract and redirect her. I cannot change Dad's Fixadent habits. I cannot keep track of his hearing aids, nor can we replace them every other month. I cannot make sure he puts FRESH batteries in instead of spent ones. Mom will always hate her Facebook photo or any other recent photo of herself because it doesn't show what she looked like when she was the most popular girl in her high school and all the guys were attracted to her. She will always want her stuff.

And everything will always be a crisis.

Oh Powers that be in the Universe - grant me the ability to deal with the real crises when they come, the patience to ignore the Not A Crises, and the wisdom to know the difference.

Crisis vs non crisis. Fantastic way to look at it! Mother is also suffering from \"Wanting her stuff\" after a move. There is already more stuff than I am comfortable with in her apartment!

I had a dream last night that we were given a trip to Hawaii. We were scrambling to pack our suitcases because we didn't get much notice. It was an unspoken understanding that my Brother-in-charge-of-finances had paid for the trip. What I realized later was my mom had put him up to it to get us out of town so she could come and get all her stuff.

My brother hears the panic and responds to it because he's not here all the time and he doesn't get it. If she had been in a panic about something he KNEW was not reasonable, maybe he would have gotten it. Unfortunately, Mom comes across as functioning much better than she really is.\r\nPictures! That's worth a try. Thanks for the suggestion!

Goldie, \r\nThanks for sharing. It sounds like you're aware of the patterns and have developed the best responses you know. I love the Serenity Prayer concept as a way to cope.

Goldie..I need to remember that part about the wisdom to know the difference between a crisis and a non-crisis. Really great read. Thanks for sharing.