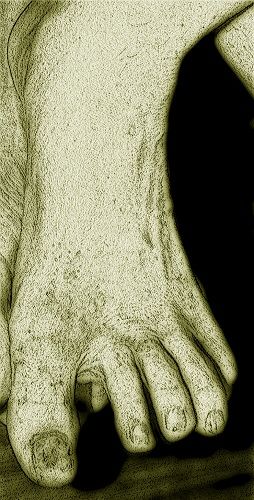 Part of the challenge of caring for my partner has had to do with setting limits and saying "no." Over the years I've learned to do this, more or less, with claiming time and space for myself. Given her neurological-mixed-with-mental illnesses, I can exercise only so much influence. Most times I have to back away, detach, and keep reminding myself that the only behavior I can control is my own.

But there is a fuzzy and disturbing threshold in all that, when saying "no" feels like I'm withholding care. Except that I'm really not, when all is said and done.

For example, there was the time she had trouble sleeping and wanted to go to the ER and I refused to take her. It was not a palpable emergency; after a while her agitation lessened and she was fine.

Today she saw the podiatrist. She has a hammer toe, but she is not in any pain; her pinky toe is just turned in a little. She wants the toe straightened out because she says it will improve her posture. She says improving her posture will make her more independent and able to get a job.

She walks fine. Or, as her neurologist's notes attest, "She has basically normal balance." He has her walk for him every time she sees him. I might argue that she does not walk enough, since her main form of exercise is taking short walks around the house.

She wants surgery for the hammer toe. It would mean part of her bone gets shaved off and pins get inserted for four weeks, with overall healing taking two months. Infection would be the main potential complication.

I asked the podiatrist if this kind of surgery was recommended in cases where the person was not in any pain.

Partner didn't like that at all. She didn't like my speaking up for her and angrily interrupted me when I asked if new X-rays of her feet were necessary, since things were generally unchanged from when she'd had X-rays done two years ago. (The new X-rays were taken.)

After the appointment, she told me I was not taking income into account -- namely, the income she expected to make once the surgery improved her posture and made it easier for her to get a job. (Yeah, right.)

And for the first time, I told her directly what my lawyer had told me, years ago.

I said, "I am not legally responsible for you."

I said, "If you have this surgery done, I don't have to pay for it. And I won't. I've been paying for everything else, but that is only because I have chosen to do so."

I know that's the right call to make, but it's also a hard call. I have been deeply conditioned in my life to be The Responsible One (same as you all!). I have been well-schooled to jump through hoops to fulfill others' expectations. I have been the Provider in our relationship for well over a decade now. Frankly, sometimes (like today) it feels as though I am being blackmailed in a neverending drain.

The bottom line is that I don't have infinite resources. I have to think of the future, and of medical needs that are bound to come up that really matter. This doesn't. She's not in any pain. Her walking is fine. In my judgment, it's her neurological/mental illness talking here.

The way I see it, by saying "no" now, I'm making future care more possible.

Years ago my lawyer told me, "You are not responsible for her." Not legally. I don't have to feed her, clothe her, pay for her medical insurance, her doctor/dental/eye visits, her prescriptions, her therapy, her truck insurance/maintenance/taxes, whatever she puts on her credit card, and all the rest of it. But there's "legally" and there's "morally." I have to be able to look at myself in the mirror each day.

It doesn't help that the savings I had given her years ago (to access quickly in case anything happened to me), and that she refuses to touch (she calls it her "retirement fund"), has made her ineligible for SSI. It doesn't help that her insistence for years that nothing was wrong meant that we had missed a crucial window, such that she is also ineligible for disability benefits. (It also didn't help that we had been sent on a wild goose chase to that effect by health care professionals -- but the silver lining around that cloud was that the goose chase gave me valuable information on (a) her disorders and (b) the ways the legal and medical systems don't work.)

As far as her financial support is concerned, other than the savings she won't touch, I am it.

And, as the one who is "it," I can say "no" when I feel that such is warranted. It's a tough and scary thing for me to say because on the surface it feels as though I'm withholding care and shirking responsibility. But I know it's not, especially when the podiatrist himself said, "I wouldn't."

My partner now says that she thinks the podiatrist wants to wait until her Medicare kicks in (nine years from now), which is why he said, "I wouldn't." She also says that the shiny metal fallen end cap she picked up off the floor beside a shoe display case was the podiatrist's way of calling people's attention to the display case so that they would buy the special shoes.

I think I am learning a new skill here in communicating with her. If I stick to my guns but do it in as non-threatening a way as possible, remaining calm and using a soft tone of voice, chances are that she will rearrange her reality to accommodate the limit that I set. It's still too early to tell, but that's my working theory. Hey, I can have theories, too! ;-)

She was hungry afterwards, so we went to a local diner where she had a meal and I had coffee. While I was in the bathroom she went ahead and paid the check, but I learned after we got home that she had forgotten to leave a tip. I'm going to go back there and hand something in (she doesn't have to know), even though she told me she wants to do it herself. I have no idea when/if she will actually get around to doing that, and I don't mind if we end up giving a double tip especially since it's a small, family-run business.

She had already gone out to the car when a man at an adjacent table brought my attention to a bag underneath our table. It was a plastic grocery bag and it contained several paper napkins and emptied, unclean 2-oz. plastic food containers. I thanked the man and brought the trash to the counter for disposal.

Later my partner realized the bag and the trash it had contained had been hers. She'd been keeping it in her fanny pack, and she had taken it out in order to get to her cash. She was upset with me for getting rid of it, despite the fact that (a) I didn't realize it had been hers, and (b) she had already left the diner and had gone to the car. She said I should have known the bag was hers, since it had been near her seat.

I have learned to numb out at times like these and not add fuel to her fire.

A few minutes later, she said that since there was nothing really valuable in the plastic bag, she could cut us both some slack. :-)