Nothing Ventured, Nothing Gained

Nothing Ventured, Nothing Gained

As my partner's caregiver, I am in a legal limbo. Although I hold POA for her (and thank goodness for that!), I am not her legal guardian because she is "not sick enough." The bottom line there is that she can perform her ADLs (activities of daily living).

That said, her cognitive dysfunction makes life dicey, especially when it comes to communicating with healthcare professionals. To wit:

Therapist #1: often rambled; suffered from a flight of ideas; self distracted; couldn't stay on task or subject; became lost in her explanations; and had difficulty answering simple questions....When asked a closed ended question, cannot answer with a 'yes' or 'no', but continues to ramble on non related topics in an attempt to rationalize her thoughts or actions." (4/20/09)

Therapist #2: "It is very difficult to keep client focused and on task during this two hour session. Her thought processes are very disorganized, rambling, derailed. Client is a poor historian..." (1/12/11)

Cognitive psychologist: " had difficulty articulating her presenting complaints, exhibited poor insight, and had trouble with the focus of her thought processes, making her a somewhat limited historian." (5/10/11)

Cognitive neurologist: "It should be noted that it is very difficult to obtain historical detail from because of her tangentiality and her tendency to fixate on subjects that are not relevant to the neurologic problem." (12/22/11)

Therapist #3: "Patient is intelligent and researches every nuisance to her body. Patient's sessions were often disjointed skipping from one topic to the next with no segues. Her dialogues indicate obsessive compulsive and paranoid tendencies, and hoarding is a problem....talked about an equal partnership and how is imprisoning her and not being a good caretaker....I did not see that I was helping, as she needed more than I can offer....Only supportive therapy was possible with this Patient." (7/18/12)

Neurologist: "She is still managing her activities of daily living but otherwise is felt to have significant cognitive difficulty impairing ability to make decisions, demonstrate good judgment, etc." (2/11/13)

When I can, I run interference when we are with a medical professional and my partner starts rambling, especially when she is giving inaccurate information. But she is the patient, which means my responses have been reactive ones (and they often elicit arguments from her).

One of the things I like about her neurologist is that from our first appointment onward, he has questioned her first, and exclusively, but he has then spoken with me. All three of us are in the examination room. Then he dictates his notes in front of us.

Between her recent spate of confabulations and her changes in medication, I felt that this time I needed to communicate with him ahead of time. On Friday morning I faxed him the following:

On June 17, 2013, began taking Ropinirole HCL 0.5 mg, nightly before bed, for restless leg syndrome (self-diagnosed; received Rx from ). She stopped taking the medication on her own as of July 22, 2013. She has also been changing her consumption of iron. She has made small changes in her Synthroid consumption, but for now seems to have stabilized at 50 mcg/day. Her most recent TSH reading, taken on July 31, is 3.43 [i.e., within normal range].

Though she has not mentioned it in recent weeks, has been concerned about Parkinson's Disease, for the following reasons:

1. In June she reported to me movement difficulty, such that her body sometimes hesitates when she wants to move. She said some difficulty may be due to lack of exercise at the time, or to "stage fright" when she has trouble expressing a word. (Please note that the reasons she gives also change over time.)

For example, she had trouble saying a word and made it clear to me that her difficulty was physical, rather than cognitive (i.e., she already had the word in mind). She is unsure when she first noticed this difficulty but estimated in one discussion that it began happening "within the year" and in another discussion that it has been happening since 1982 and "in a different form" as early as high school (1970s). This difficulty applies to conveying novel thoughts, rather than practiced or familiar ones. She differentiates between thinking and speaking; she said she "draws blanks" in the first half minute for a novel thought. In June she reported stiffness in her joints and said this goes back "about a month," which she linked to calcium intake at night (500 mg). She also took the calcium in response to restless legs.

2. Roprinirole is also (and was originally) prescribed for people with Parkinson's.

3. She has a genetic predisposition for Parkinson's; I am including printouts from 23andMe with her permission. We have more detailed genetic information as well and can provide upon request.

She also has an increased genetic predisposition for Alzheimer's Disease and possesses one copy of the APOE e4 variant.

On July 15, 2013, underwent an endoscopy, which showed food still in her stomach. The gastroenterologist...said this could be due to gastroparesis, which can occur in people with MS.

In recent months has been talking about various "surgeries" performed on her during her 1982 stay at . These include "CT scan X-ray brain surgery," based on CT scans taken at that showed increased brain lesions; "lachrymal surgery" to make it easier for her to cry, and now Roux-en-Y, because she believes she sees "stomach stapling scars" in the photographs from her endoscopy. I wanted you to be aware of her "theories," which I perceive as confabulations. has also experienced weight gain and stomach distension in particular.

Many thanks for any advice you can provide, and thanks also for your continued support.

Given my legal standing (or lack thereof), I don't know what the neuro's response will be -- I did not tell my partner I was faxing this memo to him. This time I just said Damn the torpedoes, full speed ahead! -- so that he has at least some of my input in advance of our Monday appointment with him. 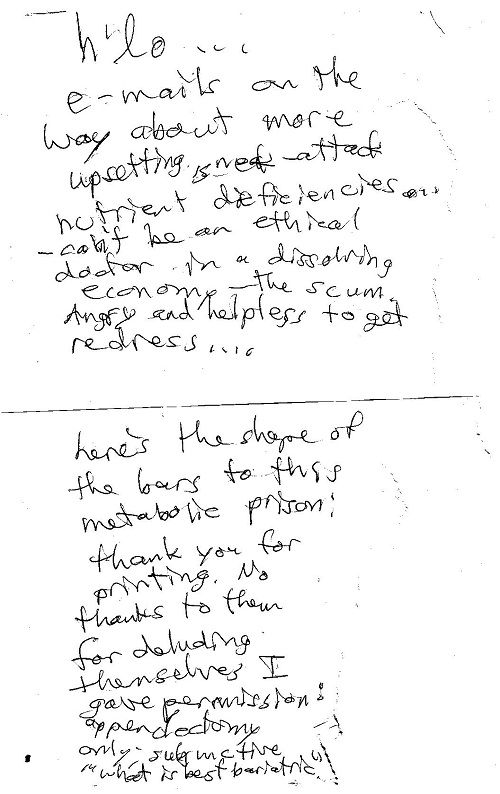 My partner wrote this note on the backs of two pieces of a can label. There's nothing in her medical record of an appendectomy or any kind of bariatric surgery.

Hours before I sent off the fax, I registered to participate in the 4th annual 9/11 Memorial Fitness Challenge. It will be held at our local hospital on Sept. 8 to benefit the National Fallen Firefighter Foundation. From the description: "Participants in this grueling fitness challenge are tasked with climbing 110 flights of stairs to symbolize the floors in the World Trade Center Towers. Many firefighters who participate will have the added challenge of completing the climb in full bunker gear and air packs."

I hadn't heard of the event until now. I had seen the announcement on the hospital's Facebook feed and immediately knew I had to give this a shot -- for several reasons:

1. Fitness challenge. Since last September I have lost 44 pounds and am seven pounds away from my goal. I weigh just two pounds more than I had when I began the first Boston-New York AIDS Ride in 1995, bicycling 261 miles in three days. (I was five pounds lighter at the end than at the start.) Granted, my body fat percentage had been considerably lower then, but I'm considerably older now. According to my Accu-Measure calipers I'm at the upper end of the "ideal" range for a woman my age. What better way to celebrate my weight loss than to put it to the test? Plus, I plan for that to be one heckuva VRide day! :D

2. I've missed these events. This will be my first athletic benefit since we moved here a decade ago. My partner and I had both participated in benefit runs up north, the longest being a 10K. I love the physical camaraderie and the terrific positive energies at these gatherings.

3. Networking and info gathering potential. The hospital's hosting of this event sets it apart from the other ones I've done. Co-sponsors include the hospital's Heart and Vascular Center, along with our local firefighter's union and sheriff's office. If I can catch my breath long enough on and/or after the climb, maybe I can get some information that can help me in my even more arduous Caregiving Challenge. Or at least make some connections.

4. I know climbs. Two years after we got together, my partner and I summited Mt. Monadnock (elev. 3,166 ft.) in New Hampshire. The following year, we hiked to the floor of the Grand Canyon and climbed back up the next day, taking the Bright Angel Trail (9.9 miles each way, with an elevation change of 4,314 feet, more than four-fifths of a mile). Add in our Massachusetts climbs to the top of the 221-foot-tall Bunker Hill Monument in Charlestown and the 252-foot-tall Pilgrim Monument in Provincetown. Back in 1987 I had climbed to the top of the 376-foot-tall Duomo in Florence, Italy.

According to FEMA, floors in the World Trade Center were 12 feet apart, which would total 1,320 feet for 110 flights.

5. History. I grew up in Brooklyn and rode the subway to high school. From my stop's elevated platform I watched the Twin Towers being built. I traveled through them to catch the PATH train in my commutes to and from graduate school.

When 9/11 occurred, my partner and I lived in Boston, close to Logan Airport. I was still reeling from the death of my cousin, whose body had been discovered the month before. We had called each other "sister" -- for over a decade she had been the only relative with whom I had spoken. My partner had stopped working and I was supporting her fulltime.  I lived within walking distance of a dilapidated track in a city park and started running to save my sanity. Whenever I felt like quitting I thought of the first responders and what they were doing, and I pressed on.

If there's anything we caregivers know how to do, it's press on.

A panorama taken from Mt. Monadnock during my climb with my partner in July 1997.

Hi EJ--I think the Sept. 8 event sounds awesome!! Good for you!! Amazing how far you've come in just a year. Wow! You are an amazing inspiration.\r\n\r\nI hope all goes well tomorrow and you receive the help and support you need. Please keep us posted.

Thanks, <a href='http://www.m40.siteground.biz/~caregiv6/members/worriedwife/' rel=\"nofollow\">@worriedwife</a> Pegi! The notes are taken from the actual office notes made by the docs and therapists themselves. I get copies of whatever I can snag. :-) And I <i>did</i> give myself a treat, which is winging its way to me -- found a pen tablet on sale to use with the freeware paint programs I recently downloaded. Am looking forward to creative play! :D