0
(Reprinted from my blog Studio Foxhoven 2.)

I'm sure those words were meant to keep me calm. I hadn't started to panic because I really wasn't sure what to panic about, but I'll have to admit, those words had caused a small alarm to go off in my brain, even if it was just because I didn't know what he was going to say next, and especially since, HE was a police dispatcher at the other end of the phone line.

The day started off with such promise, really it did. My friend, Marie, had offered to help me pack up things at my parents' house and I was looking forward to the company. We stopped at Starbucks to fuel up for the job ahead and got a couple of sweet rolls, just in case we needed something to sustain us through the morning.

My goal today was to get most of the kitchen packed up, find some of the items my parents needed at their new apartment, and take the old rifle bullets we found in my dad's office down to the city police station. No problem.

Until we found the tear gas in the back of the kitchen drawer.

I didn't know what a tear gas container looks like and I wouldn't have known what this was, had it not been for the paper wrapped around the canister and labeled with my dad's handwriting: "Caution, military tear gas." Actually, the writing looked nothing like that because it was my dad's handwriting and almost illegible, but I've had lots of practice reading his grocery lists in the last six months and I figured it out quickly.


My only goal at this point was to get rid of it as safely and as quickly as possible. I put it in the box with the old rifle bullets and we drove down to the local constabulary. Somehow I assumed I could just walk in, hand it to someone, and walk out. I was wrong.

"You'll need to call the dispatcher." The woman behind the glass pointed to a black phone on the opposite wall. "They'll send an officer to pick it up."

I did as I was told and told the dispatcher what I needed. A moment of silence.

That's when he said, "Now, I don't wish to alarm you, but...(long dramatic pause)... you need to go outside and wait by your car. An officer will meet you there." He went on to explain to me about how tear gas can become unstable and he didn't want to chance having it go off in the lobby of the police station. He also took my name and asked where I was parked.

So I went back out and explained the situation to Marie. She was supportive.

After about ten minutes, an officer came and asked to see what I had brought. I started to hand the box to him and he backed away, saying, "I can't take it right now, I just want to see it." So I opened the box and showed him the bullets and the bag with the canister.

"I'm sorry," he said, "We're not allowed to dispose of tear gas. We'll have to call the bomb squad."

So, we waited and waited some more, all the while Marie made comments on how the police obviously would be watching me, they probably already had a file on me, and how they'd probably search the car.

"It's okay," I said, "it's not like I have any dru... oh shit." I had forgotten about the trash bag filled with expired prescription drugs in the trunk of my car. I hadn't yet figured out how and where to dispose of them. There were even a few... narcotics... in there. 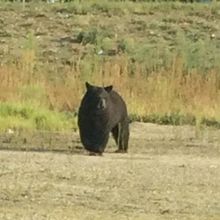 We laughed till we cried and then got hungry and debated whether or not to call and have a pizza delivered to the police station parking lot. We decided against it when we realized we'd have to explain the possibility of the pizza delivery person encountering the bomb squad.
Eventually the officer returned and said he'd talked with the bomb squad and since this was a small container of tear gas, it was okay for the officer to take it.

"It's military strength," he informed us, "It could stop a bear."

Which leads me to the one question I forgot to ask my dad when I told him the story.

I'll be on the safe side and assume they had a bear infestation at some point and needed to keep them out of the kitchen. Anything else, I'm not sure I want to know.

Oh... and the really weird thing is, we had a bear in our neighborhood last weekend. It was a young one and caught fairly quickly. That was a first for us! We have coyotes, foxes, raccoons, skunks, and occasionally a deer wanders down too far along the creek, but this is Denver! ... or at least a suburb. We're just half mile from the city line.

I love your sense of humor. :)

Oh, my, gosh, I can't even imagine how your dad got it to the house! It must have traveled with him in planes, trains and automobiles. Can you imagine?\n\nYour friend sounds like a treasure. And, I love a sweet roll and coffee. :)

Thanks for sharing this, Goldie. I have a feeling it is going to be very fascinating to read your blogs in the future.

Oh my gosh. What an experience that was. Thank goodness for a sense of humor!