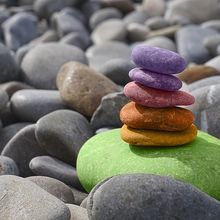 I've been through so many twist, turns and changes I don't know which way is up. Seriously, y'all know.

Just about the time I think things are going to level off and another monkey wrench gets thrown into the pot. I lost my job yesterday, was actually fired. I bet I haven't been fired since I was in my 20's!

Why, you ask? Because I didn't meet their "specifications" for the production floor. I had actually been in training since the end of March when I started this circus. Took them this long to realize this? I don't think so. I wasn't their type of employee. Their type is young, immature, smart mouthed, unprofessional. Need I go on? They looked at me like I was from Mars and treated me like their grandma. Seriously. Also, there was so much stress involved in "who will make it, who won't" that I developed a nasty case of shingles again.

So what now and where do I go from here? Off hand I want to say who knows? I had already began looking for another job so I will continue. Hopefully it will be something closer to home so I don't have to drive so far, even if it's lower pay. Less stress would be nice. I know, listen to my wish list. I'll also file for unemployment and see how that goes. I heard through the grapevine that the Employment Security Commission calls them constantly to verify applicants.

Well, first thing I have to get well. I'm already feeling better but it's a slow healing process. After that, I plan to continue working on some home projects. I had gotten absolutely nothing done on my room because I was physically and emotionally exhausted from that job. I'm thinking of putting out an "official" blog about my home projects, complete with pictures. What do you all think? I could include pictures. (I'm hoping the end result will be much better than what it looks like now lol.) I could also  in some recipes, DIY tips, just thinking of something productive.

I did apply for financial aid for school and am registered for one online class, but if I don't get the funds it won't happen right now. Due to lack of a job, there's a lack of funds. So I'm batting around ideas, and I have a good friend who also is an  author and I'd like to get her input on the blog.

I feel like this job loss was a blessing in disguise. From the day I began that job, I felt it was probably a stepping stone. Unfortunately, I just don't feel as secure about things as I once did. Job security seems a thing of the past, as are so may other things. I'll get there, I know I will, but I sure do miss my guy in my corner (aka Daddy) I sure do miss him.

I've missed everyone here too. It seems everything went by the wayside and I feel like I'm playing catch up.

I am so sorry, Lisa! It sounds like you did a great job but you worked for an employer that operates a revolving door. \r\n\r\nI love your ideas for your blog. I hope you are feeling better today and are moving forward into a better opportunity.

Sorry to hear of your job loss. Like you said, it is probably a blessing in disguise. I just lost my mom on July 12th after caring for her for 2 and 1/2 years after my dad passed away. I do work part-time so I was able to bring in some income (and keep my sanity) while being able to bring her to various doctor's appointments and such. Hang in there. It will all eventually fall into place. At least that's what I keep telling myself.

What great ideas you have for your blog. All of them sound good. You could do inspiring before and after pics for your home projects. The unknown is often scary to contemplate, but it sounds like you've got plans and activities you're focusing on instead. That's a great attitude to have. It takes time and I hope you've soon got something that works much better for you. So glad you don't have that stressful job any more. Now you've got a new opportunity. Hang in there and it'll happen!

I feel like I'm in perpetual catch up mode, but that is another story for another day. It sounds like a good idea to do some home projects, but I think it would be nice to do something just for you too -- a treat. Enjoy some free time! You will get through this!