Of Memory, Hers and Mine

Of Memory, Hers and Mine

0
(Editor's Note: We welcome Steve, who cares for his wife, to our blogging team. You can connect with Steve via his profile page: @stevelew.) 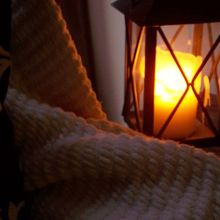 Tuesday night, late.  Not much energy.  Violent thunderstorms the past couple of days.  One last night knocked our power out not long after I went to sleep at about twelve thirty.  I had put the ceiling fan on because the air was so humid.  I roused when somehow I realized the fan was not turning.  My night’s sleep was interrupted for several hours while I retrieved lanterns and a flashlight and tried contacting the power company to tell it that the call I received indicating power was back on did not apply to our house.  Tuesday is my shopping day, so I dragged myself into town and bought groceries.   Carol had a bed bath today as she does now every Tuesday and Friday, leaving her tired so I took the opportunity to rest.

More storms are predicted.  I have one of the lanterns on the table next to the couch where I can reach it.

Carol’s condition seems stable, and in some ways almost a little better.  For the most part she eats fairly well, and does not resist the necessary handling of her body.  She seems to have, as I have observed before, developed new memory capability, in having learned the steps involved in the transfer process, sometimes even anticipating the one when I encourage her to stand up and she begins to rise up off the seat of the wheelchair.

Not always.  But often enough to suggest the idea has found a resting place in her brain that can be reached.

She does have occasional difficulty swallowing.  But that does not appear to be a neuromuscular issue caused by her disease.  Rather, as confirmed by a speech therapist whom I asked to check her out, the difficulty is caused by mucous collecting in Carol’s throat because she does not, cannot, blow her nose.  I have this issue as well, perhaps because of allergens in this old farmhouse.  I blow my nose throughout the day, and still occasionally a bit of food gets caught in my throat.

Musenex has helped relieve her problem.

The well is dry.  Will let it fill again and resume, perhaps tomorrow.

Friday afternoon in the community library having popped into town for a follow-up blood test ordered by my doctor.  Frankly, I don’t recall which of my numbers had shown a slight rise leading to the retest.

Lot of traffic in town, likely because this is the beginning of the last big weekend of the summer leading to Labor Day on Monday.

As I turned onto the road to the library I passed a fine looking horse in the pasture to my left.  The image reminded me how Carol would stuff a couple of apples in her pocket when we walked a dirt road along a different pasture where there were usually several horses grazing.  She would stand by the fence with an apple in her hand and one or the other of the horses would notice and trot up to take it.  Her farm girl roots were very deep.

The memory of those walks stabs.  I’d like to curse it.  But if such memories disappear, then what is left?

I left off last time saying that Musenex has helped relieve the food trap issue for Carol. It has, but not completely.  It would have been foolish to think any such problem can be fully eliminated.

On a more positive note, yesterday there was another instance when Carol’s mind seemed to have held on to the present moment.

We were finishing breakfast, when she kind of started, as sometimes she does when her brain appears to be refocusing, coming back from wherever her imagination had been taking her.

“Mom,” she said, quite distinctly.  I was unsure whether she was calling for her mother, as perhaps she had done when she was a child.  Her tone did not suggest that.

“Are you thinking of your mother?” I asked.

“She’s in Orchard Creek, being taken care of,” I said, offering a factually correct response.

She did not seem puzzled by the specificity of the response.  Did she remember the facility at Orchard Creek where once when she was still able to travel we had visited her mother?

Or maybe she was only indicating she was glad that her mother was being taken care of.

But even that involves her remembering that her mother, indeed, requires care, and can no longer be expected to provide it for her or anybody else.

When I get home, I will mention that at the post office I met an old friend, more hers than mine.  I will be curious to see how she responds to his name.

Respite time about over.


She did not respond to her old friend's name, even with a little prodding.

Monday night, late at the end of the three-day Labor Day Weekend during which motorcycles roared up and down Center Road throughout the daylight hours.  Maybe there was a biker convention in town.  I am sure these vehicles could be made to run more quietly.  But the noise is part of the point, isn’t it?  I recall an incident from years ago when we were living in Centereach on Long Island, N.Y. in a house that backed on to the power company’s easement, an area of sand lanes between scrubby vegetation.  Those sand lanes attracted dirt bikers.  One day, the noise from those was particularly irritating, and so as one approached, I walked out of our back yard onto the easement and stopped the approaching bike, on which sat a boy of about ten or twelve.  “Your bike makes a hell of a lot of noise,” I said to him.  His expression, which had been apprehensive as he was confronted by an adult male, broke into a broad smile.  “Yeah,” he replied.  I let him think that we were bonding over our mutual appreciation for making a lot of noise.

Carol does not seem to be bothered by the noise even though I am becoming convinced that she is dealing with the world primarily through sound.  It is clear to me that she listens intently to the music I have playing, but also the occasional spoken words from the hourly news updates or other commentary.  In that regard, I do not believe she retains much information.  But if I tell her about something I think she might react to, she sometimes does as when I told her Aretha Franklin, whom we had seen at Interlochen, had died.  The fact of Aretha’s death registered and produced a facial expression of regret, but the concert we attended did not seem to provoke a memory.

This afternoon, Tracy, back from a trip to Colorado called.  Carol was sleeping, and the music was still playing, so I moved into the green room to talk to my daughter.  During the conversation, I heard loud sounds coming from Carol.  I couldn’t tell if they were cries or laughs.  Carrying the phone, I went back into the living room to her bed, and heard again what now was clearly boisterous laughter.  Tracy heard it as well.

A little later, while I was back in the green room, I heard that laugh again.  As did Tracy.

“I’d love to know what that’s about,” Tracy said.

And I certainly would.

In fact, although I may be mistaken, I believe Carol has been somewhat more verbal lately, more likely to respond with words, or the occasional sentence.

A pleasant note, to close this writing session.

Wednesday night late.  A productive day insofar as I attended to some writing business.  I sent off Carol’s stories to a university press editor who asked to see the whole MS.  Turns out she had some preliminary conversation with Carol about the story collection some years ago.  And as long as I was in that frame of mind, I sent out two of my stories that still need to find a home.

Then a good supper with Ryan, good because I always enjoy his company, and good because Carol ate well as she had done throughout the day.

Kyle called this afternoon at the suggestion of Clare, the nurse practitioner, who no doubt informed him of Carol’s progress in responding to the transfer process by starting to stand.  He agreed that this was remarkable and said he would get back to us when he figured out when he could again work with Carol.

I don’t know what Kyle might be able to accomplish, but the fact that he thinks it worth pursuing is encouraging.

At dinner with Ryan, Carol again participated in our conversation, laughing at something humorous, and verbally expressing her enjoyment of the Chinese takeout.  In this regard, and in a continuation of the seeming improvement in her cognition, she has lately used my name again, which she had not done for some time.  It is still not absolutely clear that she associates my name with the physical me, but I am beginning to suspect, perhaps willfully, that she does, at least some of the time.

The past couple of days I have tuned in to the hearings on the Supreme Court nominee.  As I sat there, the thought struck me with considerable force that these hearings are something Carol would have loved to watch, combining her law background with her political views.

I suppose these moments when I am reminded of our past time together will continue t0 pop into my mind, unbidden, and I can choose to welcome them or not.

I hope I have the strength to accept them as a way of being thankful for what we were able to share for so long, to hold onto and cherish those memories and refuse to yield to self-pity at what has been lost.

That is a hard lesson to teach myself.