Of Music and Writing

Of Music and Writing 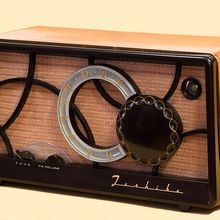 Wednesday late morning between breakfast and lunch, the dog rises stiffy from her bed, old joints beginning to stiffen, Carol restless in her chair, music playing some kind of classical trombone piece, didn’t catch the name, but an unusual sound of the brassy trombone against a string quintet.  The  piece ends and the announcer tells us that the trombone we’ve just heard is of the alto rather than the usual tenor version.

I don’t write during this time period.

But today I want to capture a moment, which in some ways is insignificant, but in another perhaps quite meaningful.

During our breakfast in the kitchen I have, as I do throughout the day, the radio  that sits on top of the refrigerator tuned to Interlochen Public Radio.  After breakfast when we move into the living room, I turn on the second radio, this one sitting on the piano,  to the same station.

Because it is Wednesday, the program that comes on at ten o’clock when we are pretty well through with breakfast, Performance Today, offers a once a week feature—the piano puzzler, wherein the very talented Bruce Adolphe rewrites a familiar tune into the style of a classical composer, let’s say Over the Rainbow as Beethoven would have composed it.  Fred Child, the host of the show, invites a telephone caller to identify tune and composer.

I have become addicted to this challenge.  Sometimes I guess the composer.  Sometimes the hidden tune.  Rarely both.

What is important is that Carol listens intently as well.  I am reasonably certain she is playing along.  I mutter my thoughts.  Today, after hearing a few bars, I said, “I think it’ Debussy.”  I don’t know enough music terminology to explain why I came to that guess.  I’ve just been listening to classical music my whole life, starting when my parents bought me a subscription to an RCA program that on a regular basis sent an LP of some famous piece of music along with a smaller disc that provided an analysis.  I listened to the music.  The analysis, not so much. As I grew into my teens, of course, I listened to the emerging rock and roll, and later developed an interest in folk and jazz. But always at certain times and in certain moods I would switch back to classical music.

So, I heard Debussy this morning.  And then I heard the tune.  I said, “There it is.  But what the hell is it’s name?”

Carol was listening.  To the music.  And perhaps to me.

I hummed the tune.The caller was having the same problem.  She nailed Debussy, but said the tune was on the tip of her tongue but she couldn’t pin it down.  Bruce Adolphe played it again.  I hummed along.  Carol nodded with the rhythm.  I remembered a snatch of the lyrics

“Smoke Gets In Your Eyes,” the caller said.

Carol did not seem to respond.  Perhaps her interest flagged.  Or the Platters, of my generation but not hers, meant little if anything to her.

But we had, I believe, shared the experience.  And that is the more significant point to be made, an indication that her impaired cognition still responds to music as well as my words, and can provide us a moment when we are in the same place.

A little later, I checked my memory.  Yes, the Platters did produce a hit version of the tune.  But it had been written twenty or so years earlier for a 1933 musical and had been recorded by among others Judy Garland.

Getting close to lunch.  Need to shut down this brief writing session

Wednesday evening after supper.  Carol was sleepy and did not eat with much enthusiasm, and now she is asleep across from me in her chair.

I have been thinking lately about my very good relationship with Ryan.  Over the years, he would lend a hand for us, sometimes, but not always, on a paid basis, such as mowing the lawn, or dealing with the fall leaf cleanup.  More recently, that relationship has deepened as I have, without having intended to, assumed a kind of mentoring role as he navigates some life difficulties.

Nothing unusual in that.  If not by blood, I am his uncle, and I have a life of experience different from the members of his farming family.  And as one who taught young adults for over thirty years as a college professor, mentoring comes natural to me.

But the idea that struck me just a little while ago, not to make too much of it, is that he is sort of the son I never had.  Not for a moment do I regret the luck of the biological draw that gave me three daughters whom I love dearly.  Nor did I ever at all lament not having an offspring of the male persuasion.

Still, I realize that I am enjoying this opportunity to discuss matters with Ryan,  to offer him perspectives not readily available to him, such as talking to him about writing and publishing since he has some ambitions in that direction.

His weekly visits have deepened our relationship. It is a pleasure to have his company and he, without being asked or prompted, joins in my caretaking responsibilities, such as standing behind the wheelchair as I transfer Carol to it, and securing her in the chair with the gate belt, all the while encouraging her. He does this, I believe, in part because it is in his nature to be helpful, and more practically because he served as his grandmother’s main caregiver for a number of years. Other visitors, understandably, don’t quite know how to interact with Carol. Nor would I if I had not been obliged to learn.

Lately I have been telling Ryan that I expect to soon receive contributor copies of the magazine in which my short story will appear. He asked me if I knew when they would arrive, and I replied that I knew that the copies had been mailed.

Yesterday, Tuesday afternoon, into my repaired mailbox there arrived a fairly thick package.  The packaging was an oversized manila envelope, not the kind that would contain any product I might have ordered.  A glance at the return address showing Wisconsin confirmed my guess.

I brought the envelope into the house and opened it up, not too gently, and removed my three contributor copies of Rosebud Magazine in which on p. 56 I found “Like Water Over Stones,” my Holocaust themed story written originally years ago, and then rewritten a number of times to reach its final neat and clean self. It actually grew up to be a novel, still unpublished, but stands up admirably as a short story.  I stood in the kitchen looking at its opening page.

Of course, I was pleased to see my name in print. I would read the story over another time. Along with the jolt of excitement, there is also always the lurking suspicion that I will be disappointed in the rereading.

I closed the magazine and enjoyed the positive energy until the sense of satisfaction I always experience when I get something published faded.

There would be little point to hurry over to Carol and show her.  In fact, I decided, doing so would not only be futile, but bittersweet with the emphasis on the bitter.  That time of sharing such good news with Carol was irretrievably gone. I would mention the news later when it was no longer buzzing around in my head.

From a different perspective, the magazine in my hand underscored my commitment to that part of my life. That will continue. I will show Ryan the story when next he comes. I will order copies and send them to my daughters. I will get the word out through social media.

But more important than any of that, I will rededicate myself to getting Carol’s collection of stories published. The collection is out at one university press now. I need to research other possibilities.

If Carol can no longer participate my my writing life, I can still work to get her the recognition she so richly deserves. She was always passionately supportive of my work as a writer, as I was about hers. I make sure new acquaintances are made aware of how good a writer she was.

When I do so, as happened recently, the individual will ask where a copy of her work can be found. However, since the stories were published individually in various literary magazines, they are nor readily accessible.

A collection will take care of that problem.