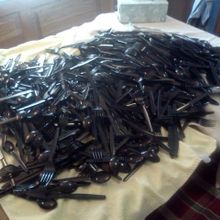 Or rather... forks... and spoons... and knives. Plastic ones. Filled two drawers, three grocery bags, and piles under the table and behind the couch. It seems my dad won't throw away any of them and won't let my mom throw them away, either. He let me take them because I could "use" them at home. Well, they went to recycling. Even I cringed at that because I knew many had never been used. Some, however, had obviously been used and never washed. Lots had spent time on the floor. Oh, and just to give perspective, that's our dining room table that seats 6. The pile is about 8 inches high in the middle.

It's interesting. Mom's the hoarder, not Dad. This isn't quite the same as hoarding. He's willing to give them to anyone who can use them, he just doesn't want to throw them away. I assured him I had made more room in case he needed to save more. Dad started giggling. He knew it was a getting older quirky behavior and he wouldn't have denied it had I said so specifically. It's so much easier to be patient with Dad.

I also found stacks of dishes in their cupboards which belong to the main dining room and an air conditioner, also property of the facility, in their closet. When my sister was in town, she spied a nice wall hanging and looked at Mom. "Did you do that?" she asked, "Or did you take it off the wall and bring it in here?" My sister is an activities director at a nursing home in California. She's been around the block a few time. Mom's jaw dropped and then, amazingly, she started laughing! Yes, she had taken it off the wall. What the heck?

I was tempted to give them a stern talking to. I didn't raise them to be petty thieves, you know.

Uh.. that didn't sound quite right. Caregiving can get confusing.