Okay, Maybe I'm the One Who Needs Meds

Okay, Maybe I'm the One Who Needs Meds

0
Can't breathe today. In fact, as I type this she's trying to read it. I can't even journal/blog/whatever in peace. If I didn't have low blood pressure I'd be worried that mine was on the ceiling. Shoulders and neck are so tight. Anxiety. Anger. Not sure how but I am sleeping all right.

Couldn't sit on the deck and read this morning without being interrupted every 10 minutes. Couldn't catch up on General Hospital without having to stop the DVR every few minutes. Went to fold laundry in the other room, thought I would watch House of Cards while doing so. Nope. Not allowed. Came coming in and fussing as to why I wasn't watching TV with her in the other room -- never mind the huge pile of laundry that needed dealt with -- ended up having to turn off the TV. Put the radio on, Portraits in Swing (NPR) had Manhattan Transfer on, which I love. In she comes again. I ended up having to shut the door in her face so as to be able to finish the laundry folding and listen to the radio.

There's a three-foot high pile of ironing that needs done. Can't do it though because she will NOT leave me alone. Not for a minute.

Now out in the living room, because not allowed to be anywhere else. She's pissed that she doesn't like what is on the major networks (we don't have cable or satellite as I can't afford it) so I was able to push to watch House of Cards. FINALLY! The television thing drives me nuts, makes me feel trapped and angry. Have to watch what she wants and the ONLY network she will watch is CBS. There are a lot of things on Netflix and Hulu I would like to watch, things she won't like. So I'm screwed.

Trying to drink green tea to calm down. Not working yet. 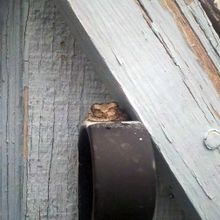