My partner looks forward to the MS support group meetings, in large part because the members accept her for who she is and listen to what she has to say. I've basically stayed in the background, but today I saw my opportunity to speak up and did.

Information-sharing and Q&A take up most of the meeting, plus potluck. The group leader talked about the cold weather (that is, cold for Florida) that we've been having, and pointed out the difference between real exacerbations and pseudo-exacerbations. If it's a pseudo-exacerbation, it will go away within 72 hours. This can include a worsening of existing symptoms and/or the introduction of new symptoms.

I mentioned my partner's acute reaction to we-still-don't-know-what (as reported here) and our trip to the ER. The bottom line is that it's still hard to tell when to go to the ER and when to wait something out.

The discussion about the cold weather gave me my opportunity; regardless of whether my partner liked it or not, I was going to be square with the group. I brought up her dislike of the HVAC fan, her use of the heating coil (meant to warm food, not to be on as a space heater for hours at a stretch), and my concerns over our safety. I added that it had already set off our smoke alarm twice -- the first time when my partner's jacket got too close to the coil and was singed...

I didn't get a chance to mention the second time, which had likely been due to burnt insulation in the extension cord from extended burner use. My partner snapped that all of that had happened in the past and she kept arguing that I was distorting the facts, now that the coil was inside a kennel cage and she was using a stronger extension cord.

The group leader minced no words: Do not use the coil; it is unsafe. Someone else said that if the extension cord is warm it poses a danger. (I've tested it; fortunately it's not warm.)

My partner argued back, clearly agitated. I pointed out that part of the problem lay in her agitation (which she was demonstrating to the group as I tried to speak) -- and that I was trying to find a balance between our safety and keeping her stress levels manageable. Because stress can bring on an exacerbation.

I was thankful for the peer pressure. My partner enjoys socializing with this group and looks forward to the meetings. These people accept her. Those group dynamics combine in a way that gives them influence.

I asked if anyone could offer us advice on alternatives to the heating coil. The group leader mentioned ceramic heaters that don't use fans and told us where we could get them locally.

My partner then argued with the leader over the definitions on an MS fact sheet. After trying to clarify things, the leader suggested that my partner could contact the organization that supplied the fact sheet directly. I fished out my notepad and later, out of my partner's view, gave the leader a note explaining that my partner had been diagnosed with primary progressive MS, that most of her damage is in her prefrontal cortex, and that she has lack of psychological insight as a result.

The leader told me that she had picked up on that. I was glad (and relieved) for our mutual understanding.

More people attended this meeting than the other ones we'd been to, so we had introductions and reintroductions. It led the group leader to suggest that we could start wearing name badges. Time to wear mine! :D

One of the stores the leader mentioned was in the same strip mall where I take my recyclables. I've been cleaning and organizing my studio and had a huge bag filled to the brim with paper for the bins. After the meeting, we went to the store and came home with an honest-to-goodness real space heater. :D

Unfortunately, it has a manufacturer's defect in the molding of the base. *sigh* But the return policy says they'll replace it with another of the same model. *fingers crossed* The important thing is that my partner accepts it.

At home, she accused me of "blindsiding" her and of "airing our dirty laundry" in front of other people, and added that I started doing this right when she was learning to assert herself. She argued that I did not give the full description of the coil and how it worked, thus giving the people around us the wrong idea.

I let her harangue me and continued sorting my papers. I'm keeping my eye on the prize: a working heater that does what it's designed to do and a safer environment as a result. 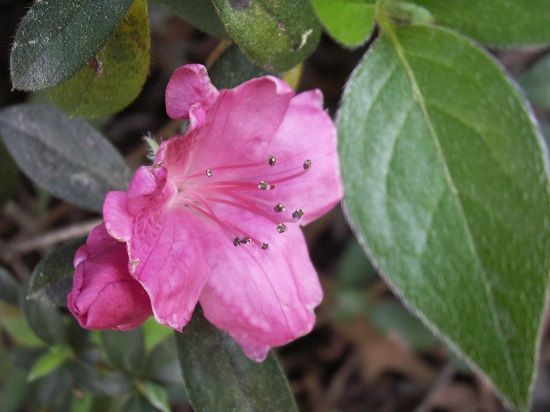 Azalea in our hedge. Spring is coming!

YES!!! EJ, this is terrific. Good for you!\r\n\r\nI'm so glad this has been resolved. In addition to a new heater, I think you now have a new perspective on managing your partner's unsafe decisions. Your voice--the voice of reason--can be the voice that decides.