These past few days have been quiet as our days go, and for that I am immensely thankful. My partner's main complaint has been that she has a hard time waiting the half hour between when she takes her Synthroid and when she can eat. When picking up her refill, she asked the pharmacist if she could take extra Synthroid and not wait before eating. She figured the food absorbs the drug, so if she takes more of the drug, more would be left over from whatever the food absorbs.

As I expected, the pharmacist told her to take the pills according to directions. So far she's complying under duress. That in itself is huge.

Other than that, we've been pretty much on an even keel.

We've reached the time of year when daytime temperatures outside are no longer too cold for my Florida-thinned blood, and the weather isn't too hot, muggy, and buggy. All told, conditions here have combined into The Perfect Non-Storm -- and I have found Paradise on my front porch. 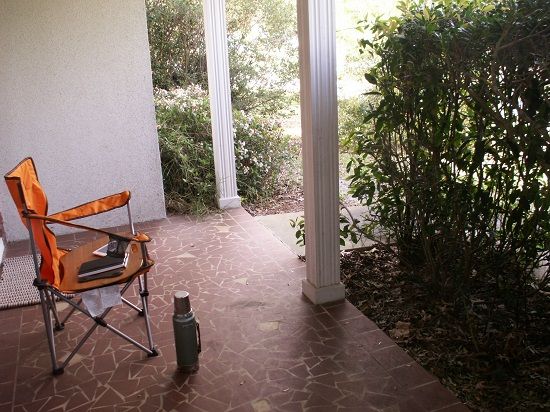 I've been spending about an hour a day out here, two hours on a couple of really good days. I bring my folding chair and lap desk, journal notebook and pen, eReader, camera, and thermos of fresh-brewed coffee. At these times my partner is usually asleep, though sometimes she's engaged in her own reading. Sometimes she joins me on the porch for a few minutes and I point out to her what I've seen. Like the toad flax (snapdragon) that sprouts in the yard this time of year: 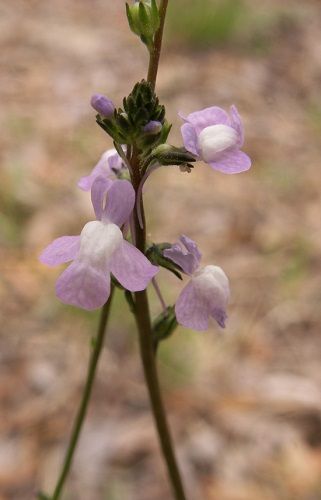 Or the Indian hawthorne, which has been drawing pollinators: 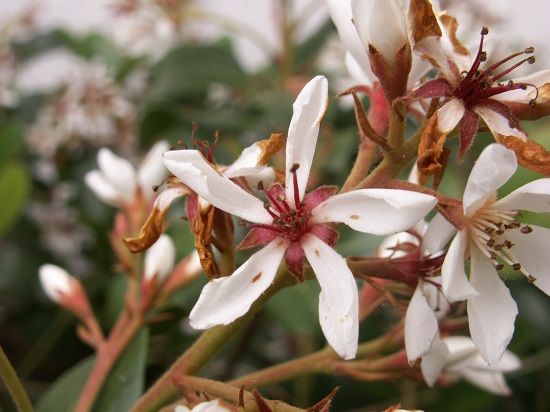 Most times I am out on the porch alone, but in this case "alone" refers only to human company. Or, more accurately, in-person human company, because the books I read are filled with people.

I put my reading down to watch the animals who share this space. Like the male eastern towhee perched on the elm beyond the hedge: 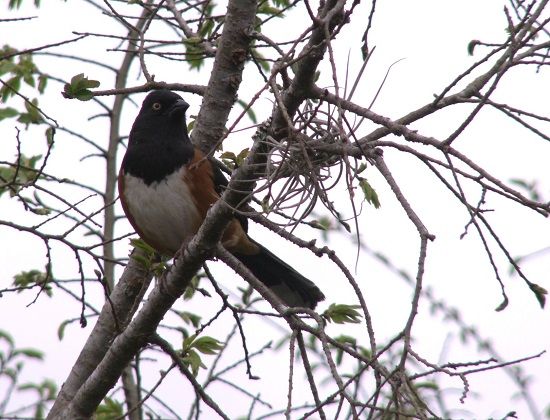 This might have been the same individual I had seen the day before, chasing a much smaller bird that I think was a Carolina wren. The wren had spent a fair chunk of time busying itself under the hawthorne and then hopped across the walkway and into the hedge. That brought the towhee over from one of our volunteer oaks. For several minutes the towhee hop-chased the wren from one end of the hedge to the other and back again. At the end of the drama -- which came to within five or six feet of me -- the wren was back beneath the hawthorne and the towhee was back at the oak, which also hosted a squirrel: 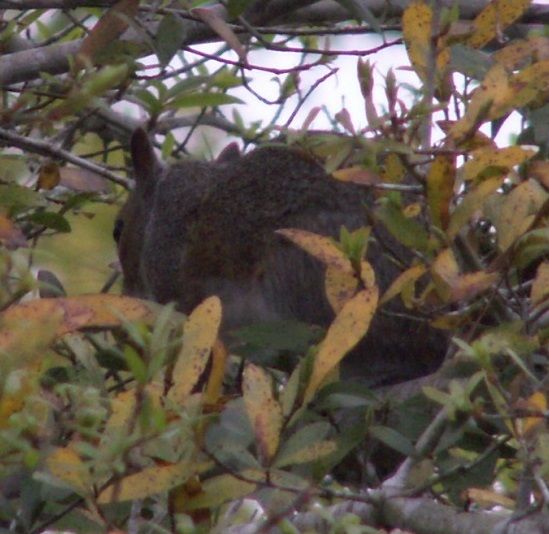 A male cardinal, perched in a different volunteer oak (because the birds poop trees in our yard), remained uninvolved: 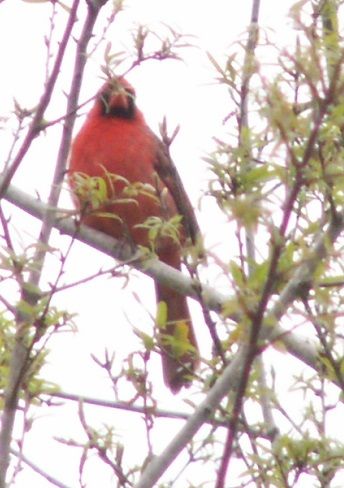 A female cardinal, perhaps his mate, inspected some twigs on the ground not far from the squirrel.

A male lizard (probably a brown anole) lives in the hedge. When I first saw him, he was on the patio, doing the push-ups that are part of his territorial display. Maybe the porch is really his. :-)

Time becomes a different entity here. I am not waiting for my partner to get ready or numbing myself during her monologues. I am not sitting in a waiting room. I am not huddled in my studio away from her clutter. I am sitting in the fresh air, outside a house whose doors and windows she has sealed up with blankets and towels. To get to the porch I have moved the heavy wood plank and the crutch that she has positioned to seal off our front door with a blanket: 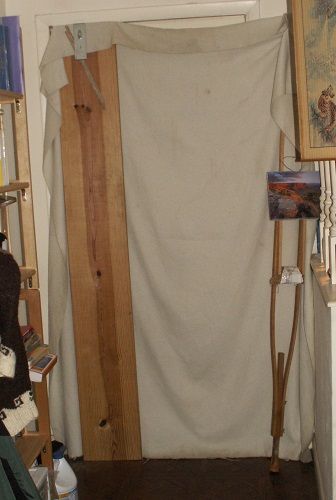 To the crutch she has added a photograph of a wide-open landscape, taken from a calendar, because the image soothes her.

She points things out to me, too. In a rare social outing, we both attended the wedding of a friend of mine this past weekend. During the reception my partner noticed a bird that had wandered inside the building: 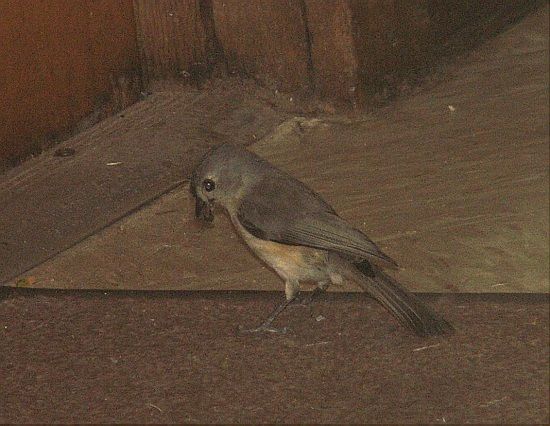 I haven't identified this one yet. But the bride told us that a bird crashing the wedding is a good sign. :-)

My partner and I stopped at the post office on the day we picked up her prescription. She immediately noticed a waved sphinx moth (wing span over 3 inches) on the external wall. I've posted the shot here.

Those are magic moments, within the sense of wonder that we share.

I remember the greed I felt for things that seem distant now -- like community involvement and socialization beyond a few times a year, a living space that I could open up to visitors, my own projects and the drive to accomplish things that take more energy and commitment than I currently feel able to give. My own sense of control. I remember feeling increasingly alone as all those layers fell away.

These days I feel as though I both grant and live under a pardon. I no longer pressure myself. My partner and I can just Be.

I pause in writing this entry to listen to her oft-repeated theories about her 1982 "brain surgery" to give her MS and her "lachrymal surgery" to help her cry. She now wonders if those "surgeries" had disrupted her pituitary gland, creating her need for Synthroid 31 years later.

I know that nothing I say will make a difference. The best thing I can do for both of us is to just listen.

She asks me to look at her computer screen, which displays a Pub Med article written in the technical jargon she studied and knows well and that makes my eyes glaze over. She tells me she has a question about something on the screen. I can tell that the article is about cell lines, but that's my limit; this is her field of expertise. She still has great intellectual capacity in the midst of her cognitive and emotional dysfunction.

The question she wants to ask me isn't related to the article. It's related to a cartoon in the sidebar, similar to this one: 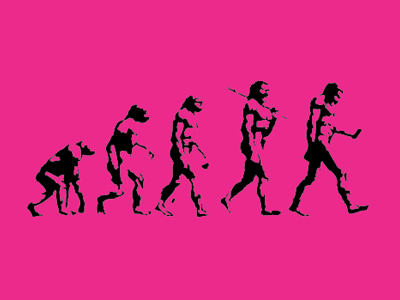 She wants to know what the human on the right is holding.

I tell her it's a mobile device. I point to the text by the cartoon, which says you can now read Pub Med on mobile devices.

On March 17 I wrote in my journal, I feel like a cartoon guru sitting at the mouth of a high mountain cave, to which a traveler makes an arduous climb and asks, "What is the secret of life?" For me, right now, this is it. A front seat on the front porch, watching and listening to the drama of birds, squirrels, lizards, insects, wind. Cars drive by. I wave to and greet a couple walking their dogs.

Inside, my partner updates her list of prescribed and OTC medications, which I type up for her. She adds miscellaneous items that I include at the bottom of the page. Among these are, "Identify/express feelings" and, "When cry, ingest salt," both marked, "As needed."

Sometimes the simple reminders are the most important.

Ah, EJ, thank you for this. I so enjoyed our visit on your porch, especially because the visit brought an escape for me from our very cold weather in Chicago.\r\n\r\nI'm soooo glad you are being--and being so well. It's good to be good. :)