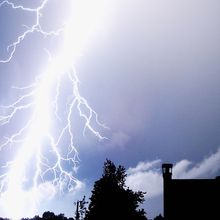 For the past two months, I’ve been holding onto one hope and one hope alone: Vascular Dementia. My grandma had two strokes this year. Surely her dementia is due to that, and not to that other thing, that diagnosis I refuse to utter in my heart. For me, Vascular Dementia means that if Grandma doesn’t have another stroke, she could possibly live out the rest of her years like this: forgetful, irrational at times, but still remembering important things, like who I am. For me, it means that there would be relatively little change in her personality and her behavior, and that she would die a respectable death as an 83-year-old woman who is understandably forgetful. For me, it would mean that I could continue to care for her.

The day after I returned from the Dominican Republic, I read these words on her medical evaluation form: Alzheimer’s disease.

Whoa, where did that come from?? How did my comfortable diagnosis elevate to that? I debated on whether or not to mention it to my mom, who doesn’t pay as much attention to Grandma’s medical documents as I do. But I did. And she said quietly, “Yeah, I saw that.” And then my mother started to cry. Mind you, my mother does not cry. I held her. The sobs came—both hers and mine. That’s when I ‘fessed up. “I can handle this with Grandma, easily. But with you…Ma, I just don’t know how I’ll manage. I can take care of you, that’s no problem. I just don’t want to lose you.”

And so the moment gave life to an hidden thought I’ve had for months: Does my mother have Alzheimer’s Disease? I started thinking about the arguments my brother told me about, stemming from their misunderstandings (usually including the phrase, “But Ma, we talked about this already!”) Her humorous (to her) story of how she took the subway home from a client’s house, forgetting that she had driven her car. Frequent mentions that she’s been “so busy that I forget to eat.” I’ve been taking these things in, storing them up, not wanting to look too closely at the incriminating evidence. But finally, I voiced my thought: “Mom, after we get Grandma settled, I want us to see your doctor together.”  She agreed.

I’ve been reading this wonderful, painful novel called Still Alice by Lisa Genova, about a Harvard professor diagnosed with early-onset dementia. My thinking has suddenly shifted from my grandma and Mom to myself. Two days ago, I started to Google something on my phone. By the time I pulled up the app, I couldn’t remember what I was about to search for. Today, I started hanging up laundry, got distracted, and forgot all about it until I saw the open machine. Things like this are happening to me more and more.

For the past two months, I have been positive, patient, and blessed to take care of Grandma. Tonight, I am terrified. I suddenly find myself grateful that God’s never brought that “special someone” into my life, and that at 40 years old I’m still single and childless. What if I have Alzheimer’s? How could I even think about putting my future husband through this, or my children? As my grandmother often says, “I wouldn’t wish this on my worst enemy.” I’d rather die single that subject someone to this horror.

So…I’m scared, but not without hope. So let’s say I do have early onset Alzheimer’s. I’ve got what, 10 good cognitively fulfilling years left? I think about the church plant I’m involved in, and how wonderful it would be to leave behind an eternal legacy. I think about the lives that I can touch, the young people I can disciple, the family members I can love and serve in Jesus’ name. More than anything, I think about life after Alzheimer’s, vascular dementia, and old age, a life with restored minds and bodies, a life in the presence of the God who created me and my brain, and never leaves me nor forsakes me. Yup, that’s where my hope lies! Suddenly, I’m a  little less afraid.

Note: Yup, I do recognize how paranoid I'm being (thus the title!) and it sounds like I am jumping to conclusions. I will call the doctor's office tomorrow and find out if why he wrote that on the evaluation, given that it was pre-MRI.

Hi--I'm so glad you felt better after writing this out. There's so much to fear for ourselves and our family--we just want everyone to be well forever. \r\n\r\nDo you and your mom schedule an appointment for her? I just wonder how she's doing.

(((Big Hugs))), Denine!\r\nIn addition to the brain damage from her MS, my partner has one copy of the APOE e4 variant for Alzheimer's and it has been diagnosed in her family, so that is in the back of my mind, too. The main way they test for it these days is with a PET scan, which is more finely-tuned than an MRI. I keep my fingers crossed for vascular dementia for your grandma.\r\n\r\nI follow an extraordinary blog by David Hilfiker at http://www.davidhilfiker.blogspot.com/. He is a retired physician who was diagnosed with Alzheimer's and is in its early stages. He is also very active in a faith community. His writing has a beautiful spirituality to it, in addition to his reports of his own cognitive decline and his mission to demystify the disease.\r\n\r\nAs for forgetting and distractedness, I can tell I've had a tough day when I try to open the fridge door with my house keys (yes, this has happened). You're dealing with a lot right now, on top of what you've already been dealing with. Please remember to breathe. And Kudos for being proactive with your Mom and with checking the doctor's evaluation.

Dear Denine, I am so sorry to hear about this news about your Grandma's new diagnosis. I think that you will be such a blessing to her regardless of the diagnosis. I find it hard not having a diagnosis for Elly, since I have nothing to \"blame\" Elly's behavior on but at almost 93 yrs old, we just say, \"she's wearing out\". It sounds like you are ready to ask some great questions of the Dr! \r\n\r\nAs for your \"memory\" issues, it has been scary for me too to have a lot more forgetfulness issues! I am wondering that with our use of technology, the stress emotionally that we are enduring, that maybe our brains are just overloaded? Slowing down, taking the caregiving classes and trying to take time to just relax has helped me some. . . I do wonder what I will be like after my live-in caregiving is over. . . I am asking God for healing to begin now, for you and me!