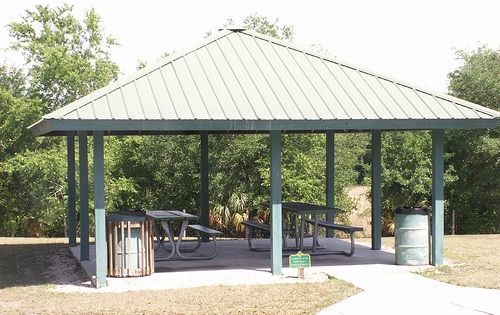 The photo shows one of two pavilions at my community park, a couple of miles from home. This pavilion is the one with "my" picnic table. I come here with my MP3 player, journal notebook, other book(s)/eReader, and camera. Opposite the pavilion (and behind me from this photo angle) is a soccer field that is also used for kite flying. More recently it's served as the "airport" for a remote-controlled plane: 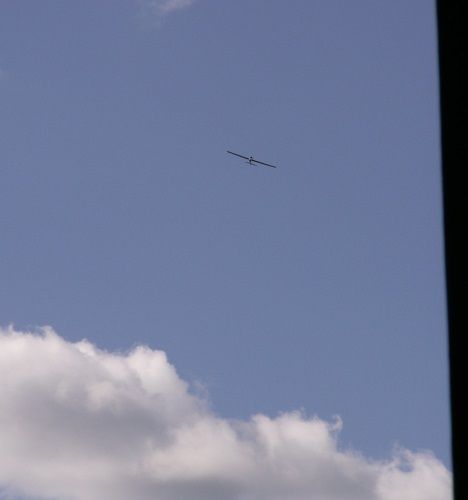 Out of frame to the right of the pavilion is a playground, with basketball courts, skate park, and bathrooms farther down. To the left and down the road is a baseball field. The park also contains a nature walk.

Most times, though, I'm at the picnic table. I do a lot of journal writing here, without the look-over-my-shoulder feeling and frequent interruptions I get when I'm at home.

Tuesday's weather was perfect for a trip to the park. While at my table I called a dear friend and former mentor of mine and we spoke for over an hour.

Here's part of what I wrote in my journal, beginning with a report on Monday's gastroenterology appointment:

In answer to question about "gastric bypass," said, "It's irrelevant," and told her it has nothing to do with what is happening now. That she is fine now.

She wanted to see the pylorus. He showed her in the photo and said that's fine. Told her, "Don't think about it."

(Yeah, good luck with that.)

He saw her for 15 minutes and then left before she could ask more questions. She interpreted his hasty exit to mean he didn't want to address her question of, did her pylorus look like that at birth, versus "post-surgery." She said he didn't want to be embarrassed, and that like he is a mouthpiece for the AMA.

I pointed out the fact that his waiting room was chock full of people. That didn't seem to register with her.

So I was nodding when I read in the Schnider his quote from Korsakoff (1891) about a patient who, presented with the reality of a situation, "contemplated for a long time and then modified his delusion."

The assertion, "It's irrelevant" is a good touchstone for me. I don't have a doctor's authority, so I would not be as convincing to . But more and more I am refusing to engage in certain conversations. I try Amador's approach that amounts to, "What I think is not the issue," but that doesn't satisfy . She hounds me for an emotional response and interprets my restraint as part of my own sickness.

I have taken to using the old 12-Step standby, "All I can control is my own responses." Including to her slings and arrows and cajoling.

Following statement that he wouldn't know how to get the protocols for her 1982 CT scans, announced yesterday that she would stop looking for them . Meanwhile, she is coming up with a list of books and authors that give her hidden messages about her "brain surgery." In addition to Nicola Griffith , the list includes Ursula K. LeGuin, Cecilia Holland, and Joanna Russ.

Schnider, again quoting Kosakoff (1889): "The more associations being established between one impression and others, the more easy it becomes to recall it, because chances increase that the excitation will find on its way a group of neurons that have perceived the impression."

Korsakoff wrote about the incorporation of actual memories within a temporal distortion, so this isn't an exact correspondence. But I jumped ahead and found reference to MS on pgs. 138-9: "A rare cause of fantastic confabulation, difficult to classify, was reported by Feinstein et al. (2000). Their patient, a 'middle aged male of middle-eastern descent' fulfilled criteria for the diagnosis of multiple sclerosis, including findings in the cerebrospinal fluid, evoked potentials, and brain imaging....Although this case was highly atypical for multiple sclerosis, it showed that fantastic confabulations could occur in the context of normal orientation in a disorder having the characteristics of hebephrenic psychosis. A similar case of confirmed multiple sclerosis, a 23-year-old man producing absurd, in part paranoid stories, was recently described by Gundogar and Demirci (2006). Memory performance -- including delayed free recall -- and orientation were intact."

5:15 p.m. Over an hour on the phone with . I wanted to follow up on our conversation where was also on the line. He now has a better understanding of the situation and of how the various systems have broken down....He also understood and shared my amusement that the part of psychology that terrified me when I was his student now fuels my fascination (a.k.a., coping).

Over the weekend, had said, "I woke up this morning with a great idea!" She proceeded to tell me that she would go to the [ICCD clubhouse] to get a job, but she would then hire me to transcribe her job interviews -- and the would pay me my transcriptionist rate, which would be my job with them. Because as someone who had been in therapy, myself, that would make me a mental health consumer and thus eligible for their program. In fact, added, she could stay outside and wait for me while I went inside and inquired about that possibility.

I forced myself to hold my tongue on that one.

I took Monday moment by moment. kept forgetting and then remembering the on our list of stops. She didn't believe me when I said one had to be referred there -- which she had been, two years ago.

We arrived at the place around 4:30. I figured I could ask if her referral was still good. But the place was dark, despite several vehicles in the parking lot. Doors were locked.

was upset. I don't blame her. It's taken her a long time to get to this spot of being willing to even be on the premises.

She found it highly suspicious that, hours after had beat a hasty retreat from her questions, the was closed when she expected it to be open.

I suggested that the next time we could call first. After we got home, she learned online that the place takes only those people who have been referred there....

The other night asked me, "Who's the elderly woman whose picture is in the glass cabinet?"

Two things immediately came to mind. First, had been the one who had suggested, years ago, that we put my mother's photo in the cabinet. Second, when the photo was taken my mother was 56, the age that is now. That shot was also taken the year before my mother's death.

When I pointed out my mother's age, said all the surgeries "done" to her had aged her, too.

While at the park I also watched a couple of bunnies, numerous butterflies and dragonflies, and a young squirrel amidst a trio of crows who seemed to be gathering nest material. A kid used the playground under adult supervision. A group of children walked down the road with a couple of Chihuahuas. The young man who flies his remote-controlled plane arrived; the plane was airborne when I left for home.

Schnider's book on confabulation is a recent purchase. On the more fun side, I also picked up a pen tablet and spent the weekend in creative play, drawing on my computer. I posted pictures to the Caregivers Create group, but here are a couple of samples. The first is all doodling; the second is a collage of photos I've tweaked (the woman is my maternal grandmother; the shadow behind her is mine). I found freeware paint programs here.

Thanks, all! Actually, there are times when I let my partner know I'm going to the park -- it's not entirely secret, and she's glad when I take care of my needs. I don't always tell her I'm going, though. :-)\r\n\r\n<a href='http://www.m40.siteground.biz/~caregiv6/members/worriedwife/' rel=\"nofollow\">@worriedwife</a>, thanks for the CT scan info! I'm sure my partner would fixate on the X-rays. :-) But that's fascinating to know.