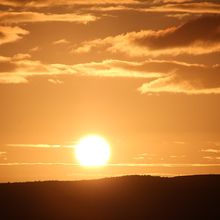 This is my first post here, and I'm not sure as I type this where it's going. Please be patient if I ramble.

My bride of 32 years was diagnosed in November of 2009 with FTD. The decline was slow, only really picking up in the last year or so. We started Hospice about 2 months ago, mostly so I could have her health monitored since she had lost so much weight. This last Saturday she was "fine"; normal for where she is in the disease. On Sunday morning her caregiver that I bring in on weekend days so I can sleep (I work nights on the weekend) took her into the bathroom to change her and get her dressed. There was the usual complaining from my wife as I was dozing. Then the caregiver frantically came into the room where I was sleeping and said she needed help.

My wife had sat down on the floor of the bathroom, then laid down. She was pretty out of it, sweating and very pale. I called our Hospice nurse. As soon as he picked her up to put her in bed, she had a seizure. The nurse thought she was passing, but she came to after about 15 seconds. We got her in bed and comfortable. Later Sunday after a couple more seizures it was decided that she would need 24/7 nursing coverage: crisis care.

Monday she slept all day. The nurses say this is normal after the seizures, plus she's on some pretty good meds for pain and the seizures.

Anyway, on to the reason I felt I needed to write this.

I know I can't beat myself up about this, but a big part of what I will take away from this is that I have had very little patience with her over the last few months. I wouldn't yell at her; I kind of internalized it, which I know is a bad thing to do, for my sake. She'd occasionally follow me around, and at times I would ignore her. Some nights I couldn't wait to go to work, but then I wouldn't want to be there. The blessing is that she never seemed to be affected by my behavior; she was always just totally dependent on me and wanted me. I know she felt safest with me as opposed to anyone else who came in to take care of her.

I now watch my wife sleeping, feeling and maybe knowing (but not sure) that the end may be coming. The negative comments I made under my breath over the last month or so ring in my head. I read all the time on social media where caregivers are pulling their hair out over things that happen day-to-day, and they're angry. Yes, this disease sucks. Yes, a normal person (probably) won't behave this way.

To me it's just like telling a new parent "They are grown up before you know it." You know it in your head, but don't understand until you actually live through it.

I think the point I want to make is that when it comes down to the end, all the trouble and the pain in the neck stuff kind of fade away. What's left is your loved one who has never been so vulnerable and in need of your love, even if they may not respond to it anymore.

Pete, thanks so much for sharing this true, raw and loving emotion. I know we all understand the frustrations you described. You are human and it is tough to watch the person we love with these diseases. You have shown great care, love and compassion. Thank you for reminding us of the blessings of life long loves. You are in our heart. I hope you will continue writing. Today, you made a difference for me. Thank you.

You are only human, and you were doing what you could at the time. I talk to my mom even when she appears to be asleep. You can tell her now of your regrets and your love.

Thank you so much for this, Pete. I'm so glad you started blogging. Please keep writing because we need to keep reading.